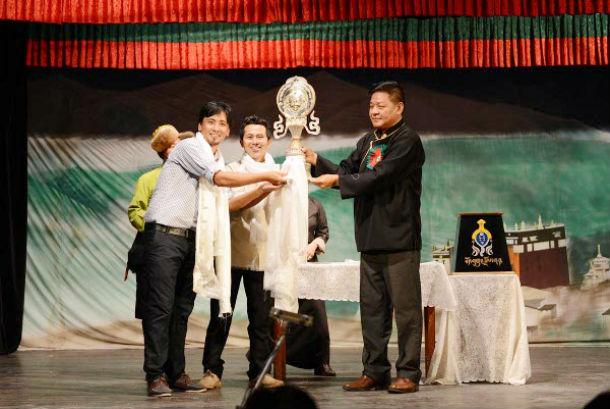 Dharamshala: - The Tibetan Institute of Performing Arts (TIPA) Wednesday, August 21 celebrated its 54th founding anniversary with a theme on preservation of Tibetan language.

Addressing the gathering, Tsering Yangkyi, the director of TIPA, said the institute has made great efforts to keep alive Tibet's unique tradition of performing arts since it was re-established immediately after coming into exile by His Holiness the Dalai Lama in August 1959 after the Chinese invasion of Tibet.

The institute has trained over 400 Tibetan artistes and organised musical concerts in more than 36 countries to preserve, promote and raise awareness on Tibet and its rich cultural heritage, Yangkyi said.

A musical competition between the two houses of TIPA – Gyalu and Ngonpa – was held to mark the founding anniversary. The artistes showcased folk and modern Tibetan songs and dances, and dramas re-enacting sacrifices made by Tibetans inside Tibet to keep alive the Tibetan language and culture, which are facing annihilation under the Chinese rule.

Ngonpa house won the group song and dance categories, while Gyalu house excelled in drama. The artistes made intensive preparation for the competition, practising 15 hours a day for 35 days.

Speaking on the occasion, Mr Penpa Tsering, the speaker of the Tibetan Parliament-in-Exile, praised the former and present artistes and staff members of TIPA for their unstinting efforts in keeping alive Tibet's unique performing arts.

"The Tibetan Institute of Performing Arts should build on this year's focus on preservation and promotion of Tibetan language by organising musical events in the Tibetan settlements in exile," he said.