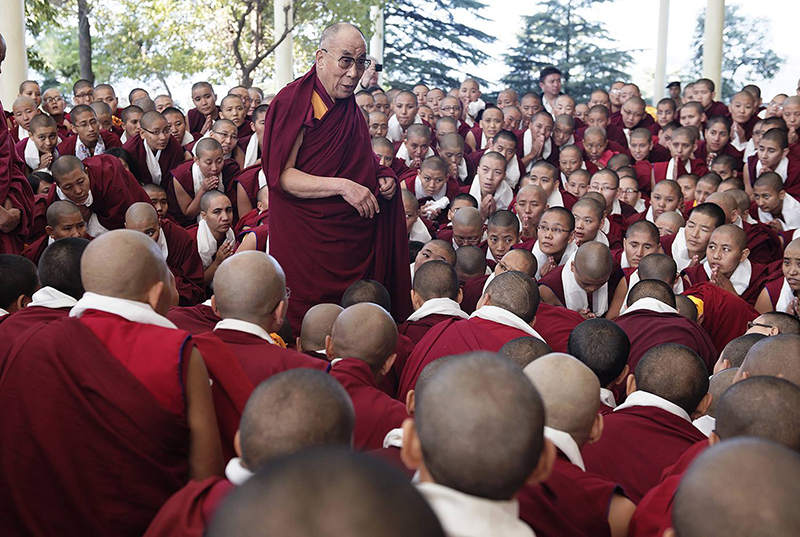 Dharamsala - India, 3 November 2013: The spiritual leader of Tibet, His Holiness the Dalai Lama met briefly with nuns who have been taking part in the Jang-Gun-Cho, the Great Winter Debate, held at Dolma Ling Nunnery.

The nuns had debated on Dharmakiti's 'Commentary on Epistermology' and His Holiness asked them "What did you learn from each other?"

He said that nuns used to have a tradition of studying classic Buddhist texts, which had lapsed, but noted that this had now changed. The revival of nuns now studying classical texts he referred to as the description of Tibet as a Central Land. This was based on the existence of a complete Sangha, monks, nuns and male and female laypeople holding vows.

Referring to the unresolved question of bhikshuni ordination His Holiness said that this was something he alone could not decide and that it requires a concensus within the monastic community, according to the Office of His Holiness the Dalai Lama.

His Holiness reiterated that he cannot decide this on his own but what he could do was encourage nuns to study the classic texts. He said that men and womens brains were the same and the Buddha himself gave equal rights to men and women, yet when it came to Vinaya, tradition had to be followed.

His Holiness said that nuns had an equal right to study and he had encouraged them to embark on a study of philosophy. He said he had "witnessed nuns debating, and they do very well." It has finally been decided on holding Geshe-ma exams, a proper conclusion to their years of study, he said, which now takes about 20 years.

His Holiness said that studying the Three Collections of Scripture - ethics, concentration and wisdom - needed to be put into practice and that you need to be able to teach on the basis of your own experience. This was why, he said, he had requested monasteries to establish places where monks could go into retreat.

His Holiness said that "The Dharma is at a critical juncture." Qualified nuns were needed to teach, not only other nuns, but in secular schools and he urged them to consider going into retreat and after that resolve to teach others.