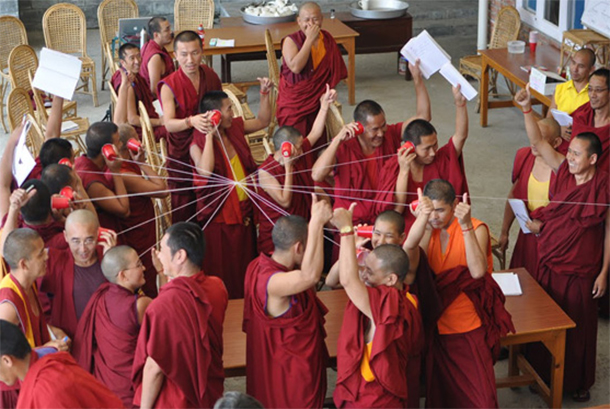 Dehradun, India: - In a small room at the Songtsen Library outside Dehradun, India, 28 Tibetan monks and nuns are looking through a small black tube that splits the sun's rays into the colors of the rainbow. This is no ritual object, but a home-made diffraction device, brought here by science educators from San Francisco's Exploratorium science museum.

When atoms of different materials are excited they glow with a unique spectrum. The diffraction grating acts like a prism, spreading light into its component colors, fingerprinting the ingredients of stars, galaxies, and the building blocks of the universe. Gasps of 'I see it too' erupt from the maroon-clad scholars suggest that the gap between Buddhist philosophy and science might not be as great as it seems.

Tibetan monastics from all over India and Nepal have gathered at similar workshops since 2001 as part of the Science for Monks program, a program instigated by the His Holiness the Dalai Lama and implemented by the Library of Tibetan Works and Archives in Dharamsala. In total, more 30 Western scientists and educators have helped engage more than 300 Buddhist scholars with science in 18 two- to four-week worskshops.

The time may be right to rethink how we approach science and our conceptions of the natural world. Religion and science are typically positioned as disjoint approaches to understanding the fundamental nature of reality.

"Americans tired of the skirmishes between science and religion would have been pleasantly surprised by the free and easy exchanges with the monastics," says Chris Impey, Professor of Astronomy at the University of Arizona. "The monastics shine a light on the areas where science is incomplete or its methodologies are lacking. From brains to the cosmos that contains them, the monastics show the value of synthesizing eastern and western perspectives."

Buddhism lies at the heart of the education for more then 20,000 Tibetan monastics living in exile in India and Nepal. Their open-minded curiosity about the inner and outer worlds can lead them to think creatively, unbounded by Western traditions, to posit new questions about science, its role in daily life, and its connection to spirituality. For 25 years, His Holiness the Dalai Lama has engaged with scientists worldwide, and has promoted scientific research into contemplative practice. But until recently, the larger community of Tibetan monks and nuns has stayed on the sidelines.

A three-day meeting from November 15 to 17, 2013, titled 'Cosmology and Consciousness – Knowing and Action', took a big step towards engaging the Tibetan monastic community with science. The conference saw presentations from top Indian and Western scientists and senior Tibetan Buddhist scholars, and dialogues included 28 monastic graduates from the intensive training program representing 13 different monasteries and nunneries. The sessions addressed some big questions: How do we know, how do we extend our knowing, and how do we know how to act?

The conference is an exploration of how science, technology and wisdom come together to address the challenges of our time, and is the second conference in a four part series. The first conference: "Cosmology and Consciousness – a Dialogue a Dialogue between Buddhist Scholars and Scientists on Mind and Matter" was held in Dharamsala, India in December, 2011, and was inaugurated by His Holiness the Dalai Lama. The series is positioning a new cadre of monastics to support and grow the cross-fertilization of ideas between Buddhism and modern science.

"Science can move at an incredible speed," says Eric Chudler, Executive Director, Center for Sensorimotor Neural Engineering, University of Washington, who delivered a paper titled 'Neurotechnology: Promises and Perils'. "Sometimes our technical ability to do something progresses without asking questions about how or even should we proceed down a particular scientific pathway."

"Scientific and technological progress is changing what it means to be human, a topic that traditionally belongs to the world of contemplative inquiry." say Rajesh Kasturirangan, Professor at National Institute for Advanced Studies, who delivered a paper titled 'Dharmanauts: Contemplation and Science in the 21st Century'. "In the next few decades, contemplative questions will become mainstream."

Although some scientists and religious practitioners express great skepticism, science is positioned as an avenue for strengthening indigenous philosophical traditions, and even perhaps helping science with its unsolved problems. It's a win-win. For those in the West, there are lessons to be learned in looking to the east.

"Science is a powerful way of knowing about the natural world, but the scientific perspective is enriched by insights from the Buddhist tradition," says Dr Chris Impey who will deliver a paper titled 'How We Know What We Know'.

The conference and preceding workshop is part of the Science for Monk's Monastic Graduates and Dialogue project funded by Templeton and also is part of a larger set of initiatives spearheaded by the Library that include the Sager Science Leadership Institute (also part of the Science for Monks program), and the Emory-Tibet Science Initiative a partnership between the Library of Tibetan Works and Archives and Emory University.

"I trust that the purpose of both science and Buddhism is to enrich and ennoble life," says Geshe Lhakdor, Directory of the Library of Tibetan Works and Archives. "This is possible only if the truth and wisdom obtained from them are lived and practiced. How can we do this is the real issue at hand. This is much more then something to just talk about."