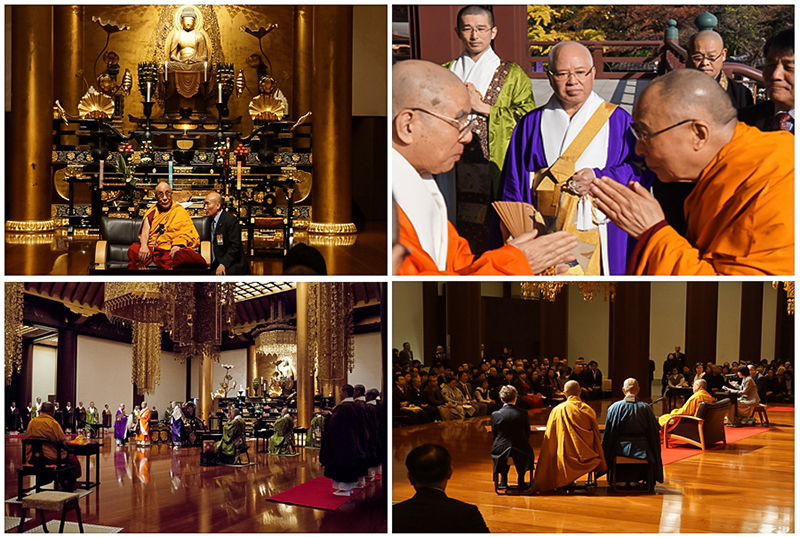 This grand institution belongs to the Jodo shu, one of the Pure Land traditions of Japanese Buddhism, dedicated to the single-minded recitation of the Nembutsu, a prayer to Amitabha Buddha. A Zojoji Temple has stood on this site for more than 500 years, but was badly damaged during the last war.

The Daiden (Hondo), that His Holiness visited was rebuilt, combining ancient and modern traditions, in 1974. He was received at the steps to the temple by the Chief Abbot Yagi and escorted inside to a seat from which he could observe the prayers led by the Abbot to poignant a musical accompaniment.

According to the Office of His Holiness the Dalai Lama (OHHDL), His Holiness was invited on this occasion at the behest of 'Live On' a non-profit organisation begun by Terumi Okaku to help prevent suicide and support children, who have lost parents as a result of disease, disaster, suicide, terrorism and war, through the grieving process. She explained that she was inspired to do this by her own experience of grief after her mother took her own life and she lost a brother in an accident. Her goal is to help people find hope as a way out of grief.

"I am very happy to be here in this magnificent temple, where monks have just performed prayers to Amitabha," His Holiness began when it came to his turn to speak. "And I am impressed by the experiences of Ms Okaku, who works so hard to relieve the bereaved of their grief and depression. Working to allay the suffering of others on the basis of your own experience is particularly effective. I am reminded of the well-known verse of dedication:

May the supreme and precious awakening mind
Arise where it has not yet arisen.
And where it has declined or does not exist,
May it flourish and keep growing.

"It is clear that the greater your sense of altruism, the more you work for the welfare of others, the greater will be your own satisfaction. And when you come to die you'll be able to go with confidence. As you dedicate yourself to working for others, your own interests will incidentally be fulfilled. Selfishness and self-centredness, on the other hand, lead to anxiety and suspicion, poor health and a decline in well-being."

He commented that all the major religious traditions talk about love and compassion, although they differ in their philosophical approach because of the differences of time and place in which they arose. In Buddhist literature there is no mention of a pure and eternal god, nor of an intrinsically existent self. Everything is described as existing in dependence on other factors.

Although the Buddha had spoken about suffering when he taught the Four Noble Truths, that is no grounds for feeling depressed. Rather we should examine what gives rise to suffering and take on the challenge of overcoming it. He said that helping others who suffer to cope and overcome their grief as Ms Okaku had earlier described is a great gift of kindness.

His Holiness clarified that we experience two levels of pain, physical and mental, and that while physical pain tends to have a physical cause, mental suffering usually derives from our own way of thinking. For this the 8th century Indian master, Shantideva, offers practical advice:

Among the prepared questions was one that asked whether in the context of non-violence it is acceptable to fight back in the face of danger. His Holiness replied:

"Try to take the short and long-term benefit into account. But also keep in mind that the difference between non-violence and violence is not necessarily in the quality of the action you take, but in the motivation with which you do it. Seeking to deceive others with sweet words out of a selfish motivation is a form of violence, whereas forceful action with an altruistic motivation is non-violent."

This prompted another questioner to ask about the self-immolations that have recently taken place in Tibet. His Holiness recalled that during the Cultural Revolution a Chinese Abbot had taken such action to protect his monastery and other monks had protested similarly against the Vietnam War. He pointed out that, very sad as such events have been, people with such courage could have sought to harm others and deliberately avoided doing so.

When he invited questions from the public, a young man wanted to know the proper attitude for falling in love. His Holiness told him he had no experience, but reflected that while physical beauty is good, inner beauty is much more important to the creation of a lasting relationship with someone.

"When you find a potential partner," he added, "don't be in a hurry to settle down, get to know each other first."

To an enquiry about developing moral integrity, His Holiness replied that the world over, modern education is aimed at material progress and development. However, we all receive the seed of affection and respect for others when our mothers shower affection on us as infants. What we have to do is cultivate that seed because affection and warm-heartedness are the foundation of moral integrity. Scientific findings bear out the positive consequences of fostering such values. His Holiness cautioned that just as it is much harder to cure cancer when it is fully developed, if we wish to effect change through education we need to start training children early.

Someone asked His Holiness what is the most important point if we want to help each other and he answered simply: "Love and compassion." To a question about emptiness he said:

"To understand what 'form is emptiness, emptiness is form' means, you have to know that it doesn't mean that form does not exist. Rather it is not intrinsically existent; it depends on and is designated on other factors. Nagarjuna declared that the instruction about dependent origination is the treasure of the Buddha's teaching. The purpose of the teaching of emptiness is to undermine our tendency to reify things, which gives rise to anger and attachment, which leads to suffering."

In the afternoon, His Holiness opened a meeting with Japanese scholars of Tibetan studies by telling them that depending on where people are in the world and what the natural environment is like, different kinds of culture come about. By some accounts there have been Tibetans in Tibet for 30-40,000 years. They were mostly nomads, who, if they had a good horse and a sword, would roam at will and if they came up against opposition would crush it. But with the coming of Buddhism, Tibetans became gentler and more peaceful. He said:

"Usually I describe Tibetan culture as a culture of non-violence, a culture of peace, ultimately derived from compassion. Although we eat meat, we respect all forms of life. Such values, in the light of the violence we see in the world today are worth preserving. I want to express my appreciation to you for the interest you take in Tibetan affairs."