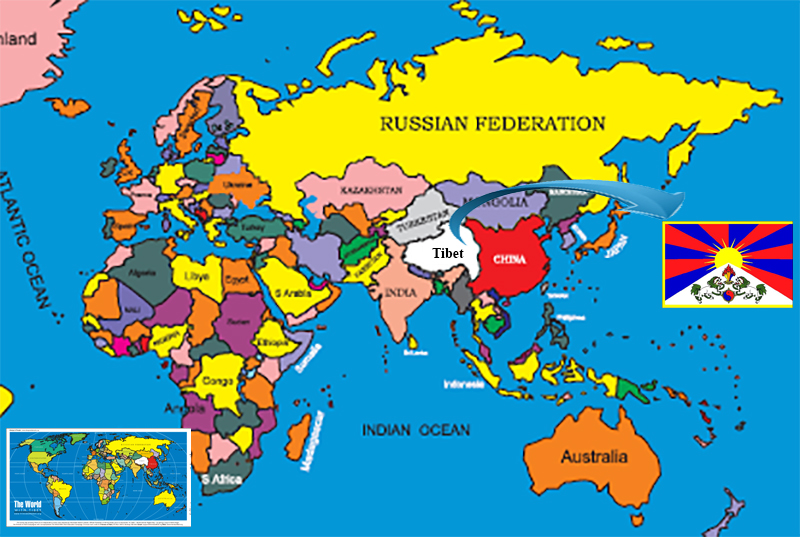 Dharamshala: - To justify Tibet was once sovereign nation prior to 1959;like political control, the rule of one law over the Tibet has to be justified. The distinct Tibetan legal system advanced under the epochs of(i) the great historic king Songtsen Gampo(620-866AD) who codified the first Tibetan law code (ii) 1623 the fourth Tsang king who was keen in legal administration, codified the Tsang law code(iii) the great fifth Dalai Lama codified the Gaden Phodrang law  in 1642 AD.

These law codes were mainly based on the Tibetan Buddhist canon, whereas the ancient Chinese law was based on philosophy of Confucius and legalist.

The territory of Tibet was governed under the one law/state law(gyal trim) by the central government i.e. Lhasa, either directly or through the concerned district officer/representative.The high court of Lhasa was the apex court of the Tibet, it adjudicated both serious crime (murder) and complex civil cases. The district officer played quasi-judicial role delegated by the central government, which had power to decide civil disputes and minor criminal cases as well. (There were around more than 120 districts).

However due to various reasons, peoplechose to settle their dispute outside the legal proceeding.  For e.g. Tibetan considered that the negative emotions such as greed, ignorance, angerand etc. were root cause of the conflict which would seed bad karma, entertainment of legal proceeding could open disputes in public,more expensive and time consuming. Hence, settlement outside of formal legal proceeding was common practice in Tibet.

Tibetanjudge beliefs that the no two cases could be same, as the principle of precedents or stare decisis(stand by the decided case)was alien to the Tibetan legal system. The legal proceeding under both civil disputes and criminal cases were common in practice. But the civil disputes could not be proceeds without the consent or signature of both the parties and it’s otherwise under criminal case.

The burden of proof and collection of evidence or other relevant documents lies on the petitioner under civil dispute, whereas in criminal case, judge presumed guilty to the accused even before the pronouncement of judgment and it was duty of the judge or law officers to investigate and collect the evidence for the case.

The concept on the jurisprudence of truth was strange, as main objective of Tibetan judge was to bring parties to agreement/settlement without the going into reality and legality of the case. When no factual consonance had been reached Oath taking and rolling of dice were two procedures used to determine the truth.The whipping of the accused during every stages of trial till admission of its crime was justified under criminal proceeding. But in civil case decision of court was subjectedto refuse or reopened at any time in future.

The visit to judge’s home with gift during trial of the case was one of the contentious practices of Tibetan legal system. Although, it was meant to show respect and to determine the judge’s wisdom in furtherance to meet reconciliation but it had often prejudiced the outcome of case by the persons who were financially well off.

According toTibetan legal system, the purpose of punishment was to prevent repetition of crime and to deter others to commission of crime. The criminal jurisprudence considered the crime had to be judged on the seriousness of the crime, injury sustained by the victim, the social status of the parties and etc. But the seriousness of offence and level of punishment were the discretionary power of the judge.

These punishments include compensation, whipping, labor and punishment. The punishment such as gouging out the eyes, cutting Achilles tendon and cutting tongue and hands of the criminal and death penalty were later declare outlawed  by the H.H, 13th Dalai Lama.However remedial under civil proceeding were mostly fines and damages, as whipping or corporal punishment was not practiced.

Apart from abovementioned laws, the specific tax codified law/rule was also existed and people considered tax system as more of administrative than law. The tax was levied on the basis of various grounds such as agricultural, animals, commodities, works, occupational, income, customs duties at border and etc.

The marriage pattern wasdiffering with the status of people but most common practice were polyandry and monogamy. Fornoble the marriage was contract in nature, the content of contract of will be read in front of family, relatives and friends and concluded by the signature of spouse and witnesses as well.The pattern of the divorce was same under all type of marriages. The violation from the husband side could cost him to pay double of the value of the articles brought by the wife or violation from the wife could cost seizure of her property. The custody of the boy goes to husband and girl to wife.

Soon after HH Dalai Lama and his entourage coming to exile, the draft democratic Constitution for Tibet on 10th March 1963 was promulgated which intended to secure system of democracy based on justice and equality and ensure cultural, religious and economic advancement of Tibetan. Later the Charter of Tibetan in Exile was adopted by the Tibetan Parliament in Exile on 14th June 1991 in the line with the principles of Universal Declaration of Human Rights.

In 1992, the Article 62 of the Charter of Tibetan in exile has established Tibetan Supreme Justice Commission which is the apex adjudicatorybody and one of the three pillars (Executive and Legislative) of the democratic system of the Central Tibetan Administration. Without abridging the law of the host nation, this commission adjudicates the civil dispute arises within the Tibetan community in exile.

No matter, history of our legal system was out-of-date, but the great lies when we learn from our history and contemplate the present status of legal system in exile. Due to lack of strong relation with the mass, the mundane notion upon the judiciary body is quiet palpable among Tibetan community.

Under such circumstance, concerned person must not hesitate to explore the power enshrined under the Charter and create such law/rules which are certain and flexible in redressing the grievances.The objective of law is to render justice to the aggrieved person, rather than smooth functioning of administration.The law/rules which are red tape or failed to redress the grievances of people need to be superseded/changed.

The views expressed in this article are the author's own and does not necessarily reflects the editorial policy of The Tibet Post International.

If you have any questions or concerns about the matter above, please do not hesitate to contact Mr Tenzin Namgyal, a Dharamsala based lawyer. His e-mail is This email address is being protected from spambots. You need JavaScript enabled to view it.