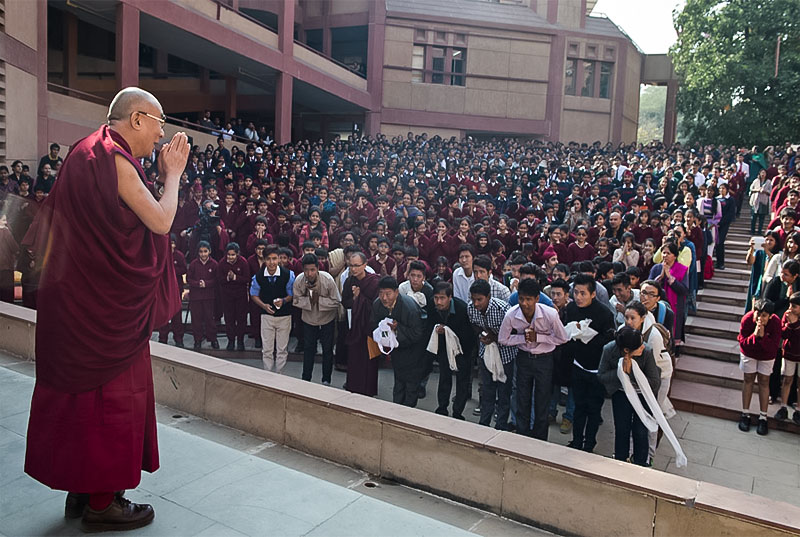 New Delhi, India, 6 December 2013: - After a tortuous drive through morning Delhi traffic, His Holiness the Dalai Lama visited Vasant Valley School in the south of the city. His Holiness was greeted and escorted to the stage of an amphitheater within the grounds where expectant students and staff awaited them. Following a brief introduction by Director Arun Kapur, His Holiness spoke.

"Hello, good morning, elder and younger brothers and sisters. I'm always happy to meet young people, because it makes me feel younger too. We older people have mostly already done our work, but you young people are just at the beginning of your time, making preparations for a happy life."

He talked about how he sometimes calls himself a son of India because his brain is informed by Nalanda thought and his body has long been nourished by Indian rice, dal and chapatis. As far as Buddhism is concerned, it involves training the mind. In order to do that you have to become familiar with the mind and emotions and ancient Indian psychology is able to fill the gap that reflects something missing from modern life.

Ahimsa, or non-violence, His Holiness explained, is an ancient idea that is relevant right now. Every day we hear reports of violence. The gang rape that caught public attention earlier in the year was about men with no values, no sense of caring for other people.

It's clear that if one has inner peace and concern for others' well-being, one cannot do them any harm. Related to this is corruption, which has become like a cancer afflicting the whole world. The opposite of this is self-discipline, taking account of the short and long term consequences of one's actions. In this context, developing a warm heart, a compassionate heart, is the best way to fulfil one's own and others' interests.

On the topic of peace amidst differences, he said, "India has a marvelous, longstanding tradition of inter-religious harmony. You are a living example that it is possible for different religions to live side by side. This is not only a treasure for India, but something you can contribute to the wider world. The sense of ahimsa or non-violence that Gandhi made so well-known is another such treasure...we need you to serve the world by sharing ahimsa and religious harmony."

He concluded, "In the normal run of things to export you have to increase production, so who will produce the ahimsa and religious harmony for export? It'll have to be young people like all of you. This is an example of the opportunity you have to create a better world."