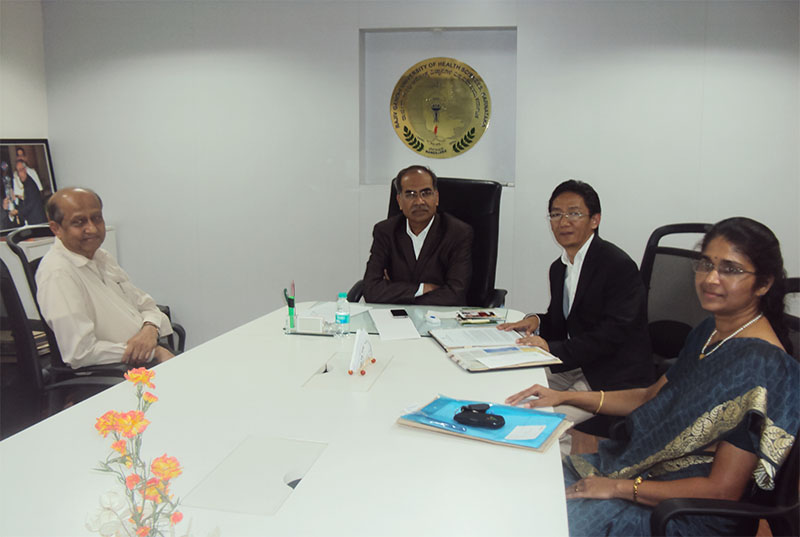 According to the CTA, hundreds of Tibetan students are pursuing nursing and medical courses in Karnataka. Hence, his meeting with the Vice-Chancellor was in tune with his efforts to meet top echelons of various universities to request possible admission assistance for Tibetan students.

During the course of the meeting, he sought all possible assistance from Vice-Chancellor Dr Sriprakash K.S. concerning Tibetan students studying in various colleges affiliated to the university and those seeking new admission. "The vice-chancellor has assured me that he would look into the requests and expressed his willingness to visit TCV Youth Hostel at some point in future," Mr Dhondup said.

He also discussed the issue of Tibet particularly the urgent situation prevailing inside Tibet.

A day earlier he met Dr. Lawrence D'souza, Director of St. John's Medical College in Bangalore, one of the top medical colleges in India. They discussed prospects for Tibetan students aspiring to pursue medical studies in the college.

Mr Dhondup has made several field visits to colleges in various cities like Chennai, Vijayawada, Hyderabad, Trichy, Mangalore and Mysore. He met the principals and senior faculty members of these colleges to discuss and address issues related to students' admission and welfare.

"We als try to inculcate the values of our traditional Tibetan knowledge to our Tibetan youths. We organised a public talk on "Role And Duties Of College Students" by Kalon Trisur Prof. Samdhong Rinpoche in August. Similarly, we conducted several religious talks on fundamental Buddhist understanding in some of the nursing colleges in Bangalore from scholars like Ven. Khangser Rinpoche, Buddhist philosophy professor in Sera University and Geshe Dorji Damdul, former English translator of His Holiness The Dalai Lama," he said.