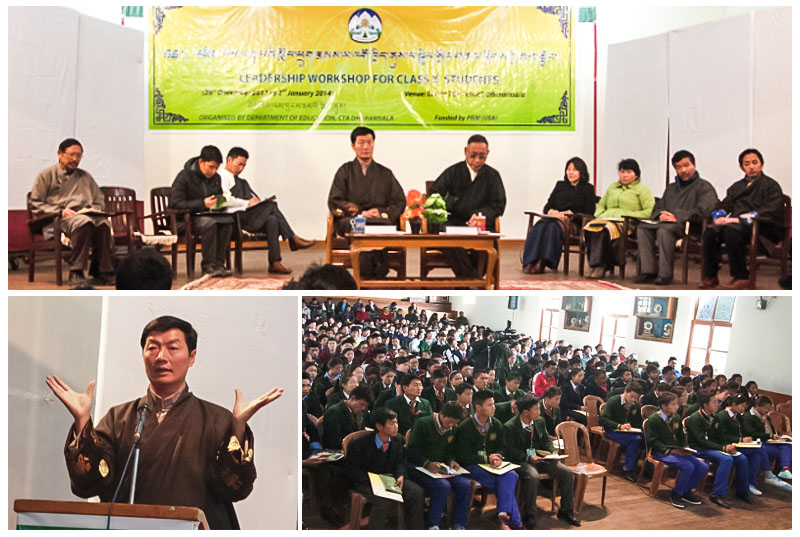 Dharamshala, December 26, 2013: Sikyong Dr Lobsang Sangay, who is also  the Education Kalon Thursday inaugurated a seven-day summit to impart leadership qualities to top Tibetan students of class X from across India and Nepal at the Lower TCV school in Dharamshala.

According to a CTA report, over 300 students comprising equal numbers of boys and girls, from 31 Tibetan schools are attending the leadership summit being organised by the Department of Education, Central Tibetan Administration.

Addressing the summit, Sikyong said "humility, integrity and hard work are the keys to a successful leadership."

"Class X is a critical juncture in a student's life where one has to decide their stream before venturing to pursue their prospective careers," Sikyong said. Therefore, we specifically invited class X students to develop their confidence and help them in making the right decision, he said.

Sikyong spoke about the need to develop self-confidence and a positive attitude in life. "We Tibetans have the bad habit of believing that someone else will come and pave the way for us, be it career counselings, scholarships, or even immigration. We can not afford to do that any more. We have to be self-reliant and solve our problems ourselves," he said.

Speaking on education, Sikyong said that the 14th Kashag prioritises education as one of the most important component of its policies. "We have rolled out various scholarships and introduced many new educational schemes to improve the quality of our education," he said.

"Moreover, education is the only vehicle that will amplify the efforts of the Tibetans living in the free world for the benefit of the majority Tibetans living under Chinese repression inside Tibet," he said, reminding that Tibetan students are studying not only for their careers but also for a cause.

Sikyong also spoke about the importance of ethics and openness, the need to venture outside of our comfort zones and embrace new, transformational ideas to expand their outlook and knowledge.

Education Secretary Ngodup Tsering, in his speech, urged the students to utilise the training opportunity to develop themselves for future leadership roles in the Tibetan community. "You are the future leaders of Tibet," he told the students, adding, "an all-round education and growth of these children would worry China more than anything".

The seven-day workshop will conclude on 2 January 2014. The first session of the seven-day summit was conducted by Sikyong himself, followed by a lengthy question-answer session.

Other resource persons include Penpa Tsering, Speaker of the Tibetan Parliament-in-Exile, Ven. Geshe Lhakdor, Director of the Library of Tibetan Works and Archives, Mr Thubten Samphel, Executive Director of the Tibet Policy Institute. They will speak on a wide-range of subjects such as 'Evolution of Tibetan Democracy', 'How to Become a 21st century Buddhist, 'The Practice of Non-violence', 'The Current Political Situation in Tibet'.

The summit also include an interactive session among former recipients of Gaden Phodrang scholarship and the participants.