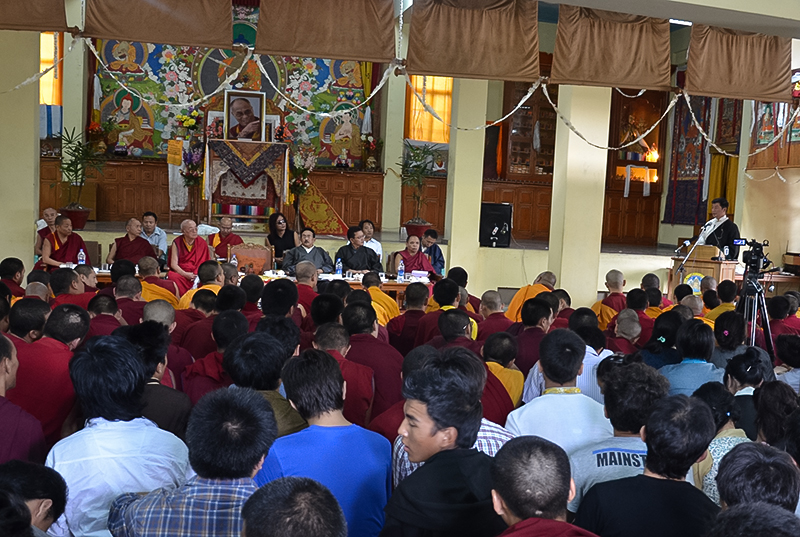 Sikyong Dr. Lobsang Sangay congratulated the former and present staff, and students for their considerable achievements. He mentioned the Institute has made great contribution to the Tibetan society in the field of education.

The college offers studies on Tibetan literature and language and trains students in personal development, management skills and education, including modern subjects and innovations to keep abreast with developments in an increasingly literate and technological world. Students from more than 15 countries, including Tibet and Himalayan regions in India also study at the college.

Sikyong felicitated the newly appointed professors and associate professors with traditional Tibetan white scarf. He distributed prizes and certificates to monks and students during the function. 2,137 students have graduated from this college since 2000. There are 253 students currently studying at the college.

The College is a branch under the Institute of Buddhist Dialectics in Dharamshala.In August 2001, the education Department of the CTA named the college as "College for Higher Tibetan Studies and recognised it as a standard college for imparting Tibetan studies.

The Institute of Buddhist Dialectics and its partner Emory University in Atlanta, Georgia, US offers both a semester and summer study abroad program for students interested in both India and Tibet.

Under the guidance of His Holiness the Dalai Lama, the late Ven Lobsang Gyatso took the task of establishing the college in 1991. After completion, His Holiness formally inaugurated it on 13 August 1998.

Since 1998 the college has educated young Tibetan students in the fields of Buddhist philosophy and Tibetan studies, with the integration of modern subjects, global perspectives, and practical skills training.