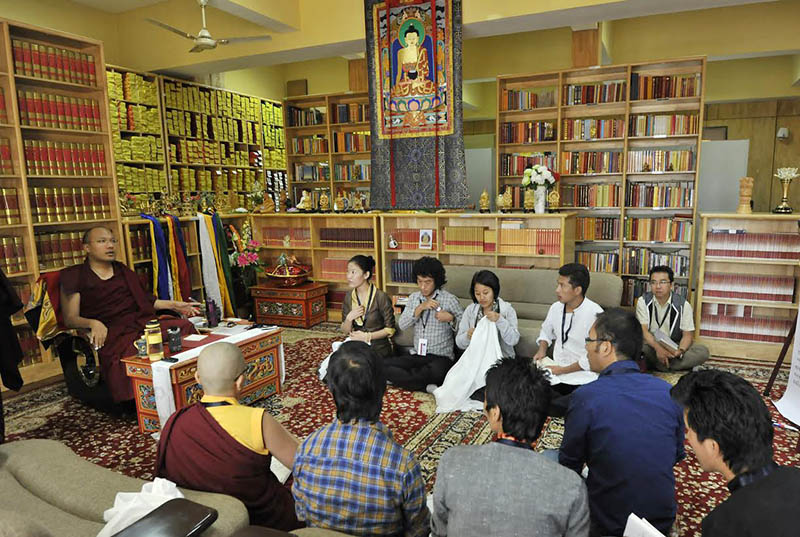 Dharmasala, India – In his interaction with Tibetan students from across India's Capital Delhi, the 17th Karmapa urged them to "actively seek ways to keep their Tibetan identity relevant, by giving new meaning to old customs and traditions."

Gyalwang Karmapa, Ogyen Trinley Dorje, is engaging in a two week dialogue with Tibetan doctoral and masters students from universities across India.

"The sustained interaction is focused on a wide variety of topics ranging from identity to poverty to women's empowerment during the first two weeks of June (May 29 – June 16 – 17, 2015)," organisers said in a press release.

The organisers said, "this is the first programme of its sort, linking Tibetan university students with a Buddhist spiritual leader for such a sustained dialogue regarding topics of broad social concern."

"The interactions continue the Karmapa's emphasis on working with youth to address major issues facing 21st-century society, and to inspire them to take greater responsibility for resolving those issues," they said, adding "The programme also reflects his interest in exploring ways that Buddhist teachings might offer new perspectives on matters of shared concern in today's world."

"As part of their daily meetings, the Karmapa and a dozen Tibetan university students are devoting one day each to the following topics: identity, discrimination, gender equality and women's empowerment, leadership, education, the environment, consumerism, poverty, unemployment, suicide and anger management. These topics were proposed by the students themselves and confirmed by the Karmapa," according to a press statement.

During their first session, the Karmapa urged the students to actively seek ways to keep their Tibetan identity relevant, by giving new meaning to old customs and traditions. "Before asking how to preserve Tibetan culture, language and religion," he told them, "the first step is to clarify for yourself why they are important to preserve. Once you see clearly why they must be preserved, the second step will be easy."

At the opening of each session, the students themselves first deliver a presentation of the day's topic, sharing their own experiences and highlighting aspects of each issue of direct concern to them personally, as well as to Tibetan society the larger society in which they live. The remainder of each two-hour session is devoted to question-and-answer sessions.

The students hail from universities across India, including Jawaharlal Nehru University (JNU), Delhi University, Central University of Gujarat and the Central University of Tibetan Studies. Each is pursuing Masters or PhD studies in a wide range of fields, including: Sociology, Economics, International Relations, Political Science, Literature, Philosophy, Modern History, Library Sciences and Nursing. The group includes Tibetans born in India as well as students born in Tibet.

"In the past, the Gyalwang Karmapa has also held interactions with Indian students at Ambedkar University (Delhi) and Delhi University. Since 2011, he has also been holding dialogues from two to three weeks with youth from North America and Europe," according to Kunzang Chungyalpa, Director, Tsurphu Labrang, saying "A similar, longer-format dialogue is planned for 2016 with Indian university students."

Before commencing the two week dialogue, the Karmapa Rinpoche returned from a two-month tour of the United States, where he delivered lectures and held dialogues with youth at six universities, including Harvard, Yale and Princeton University.