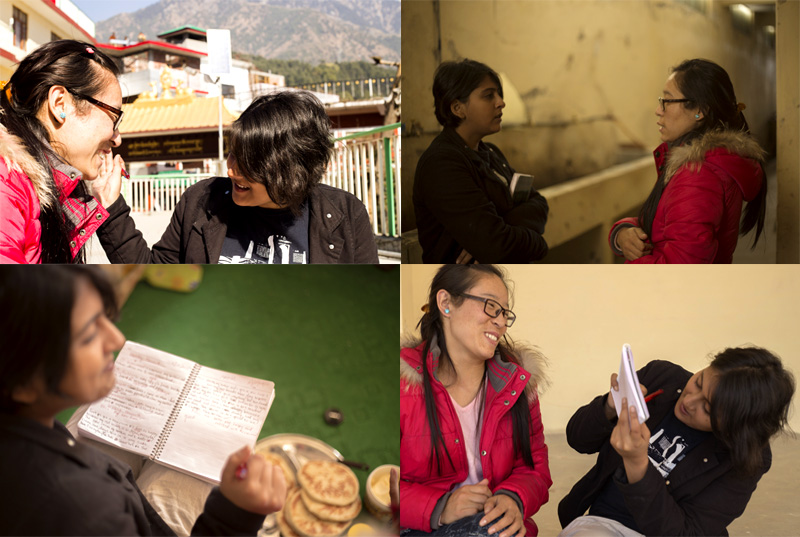 Dharamshala — Deep in murky waters of neglect, here's an account of one of the brave heart Tibetans who among many risked her life in the hope of leading a better one when undertaking the journey from Tibet to India.

Among a dozen volunteers who arrive from across the globe and help Tibetans, Sehr Raheja (19 years), a media student from Pune shares her journey with one of them.

"My maternal lineage is from Dharamshala. I had been exposed to the Tibetan struggle for far too long to not do anything about it. As a part of the volunteering, I have gotten the chance to understand the intricate folds of this community so rooted in culture and unpolluted in their hearts"

Sehr has been undertaking English conversation classes for monks since a month now and also personally teaches basic Hindi to one. She is also a personal tutor (English language) for Akee (23 years) who escaped from Tibet in 2005.

"The motive of language is expression. From Akee's writing exercises I have inferred that she derives them from her thoughts on her Life before India, Life in Exile and all her aspirations that she has for her future."

Turning the dated pages of her notebook for home assignments, Akee arrives at Sehr's favourite prose by her.

"She describes her dream. She talks about being chased by a bear and the fear of the same souring the dream. Her only respite from this nightmare is her vision of her father, who makes it a memorable one. Hence she calls it 'both good and bad,' in the concluding line."

Akee's last memory of her father is from the time when they were attempting to escape Tibet. She hasn't heard from him since except irregular and unpredictable phone calls. Her father couldn't escape the Chinese. He was released after 3 months of imprisonment.

In the Tibetan colony, she has found home with her cousin brother who works at a culinary outlet. A humble shelter, her home of a room is also the most warm place to snuggle in her chirpy company. Meanwhile, her brother ensures that you're fed enough pancakes and peach tea!

"Her brother pointed towards a kettle and asked me if I wanted to take it until my stay here in McLeod Ganj. she offered the only heater in the room. This underlying generosity and ability to put other before the self in Tibetans, is very overwhelming".

Sehr proceeds to teaching Akee whose syllables are tumbling over each other attempting to pronounce a word that was taught to her 7 days ago. It is a word of 4 syllables for 'keeping both sides happy by clever use of words and strategy,' Akee tries to recall.
"Dee-maa-ci?", Akee inquires sheepishly from Sehr, looking for approval
"Di-plo-ma-cy", Sehr corrects her.

They break into a fit of laughter post which I hi5 Akee on her perfect diction of the word 'Diplomatic'. Sehr asks Akee what the hi5 means pointing towards my hand, to which Akee responds, "Motivation!", almost instantly.

"My small ambition is to learn English, get education and become a good hairdresser"

Akee's hairdressing has already been tried upon Sehr's close-cropped hair, now, shorter than I can recall. Sehr very promptly then advertises Akee's salon skills by swinging her head with no hair to follow and exclaims, "Pe Yakpo Duk!", Tibetan for 'very good'.

I leave the teacher-student duo to make the most of their 2nd hour of the day together, "Akee has English to learn,"says Sehr.

Garima Pura is a second year journalism student at the Symbiosis Institute of Media and Communication (SIMC) in Pune.