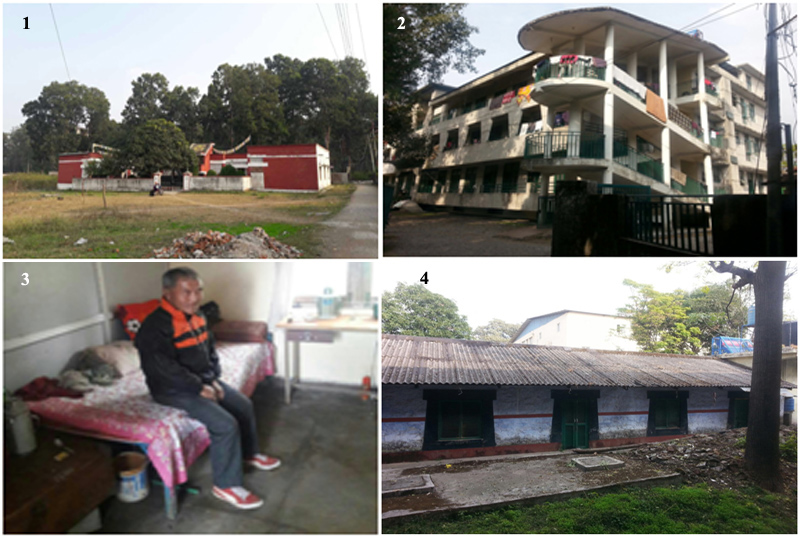 Dehradun – Old peopleare the citizens of the past and they are the forefathers and mothers that tasted the hardships of early exile life. They are the people who built insurance to rest of us who are idly walking around leaving them in an alien house filled with people like them instead exchanging heartfelt conversations with their children and grandchildren.

Henceforth, the Old People's Home is where all the aged people from different backgrounds of having abandoned family or some other who has none are gathered in a hostel-like-home under the certain in-charge and other staffs to look after their well-being and cleanliness.

The old people's home at Clemen Town of the Dehradun district is under the in-charge of Lobsang and according to him, the home is owned by an organization called Doekham Chushi Gangdruk whose office locates at Delhi and his wife undertakes the responsibility of food and cleanliness of the senior citizens there.

There are seven old people presently and to our sadness, many of them passed away due to certain health circumstances. Lobsang also added that maximum old people set to have in concerned home is 16 and two person share a room. The food is generally good and healthy and they used to get momo (steamed dumpling) every Sunday.

Talking with Lobsang Wangdue, a 70 years old grandfather, he has been in the old people's home for over four years now and he has no family to look after him at this age. In the words of Lobsang Wangdue, "I came from Kham Nangchen (eastern part of Tibet) and I have been living my life before four years at Agling settlement of Ladakh doing manual works like road constructions and have been depending my livelihood on daily wages".

He also said that he has very poor eyesight since as a kid besides looking hale and healthy physically and he has done two major operations but both wasn't too successful to let him see the things too clear. The cause of this weak eye-sighted was due to the bright sun-rays fallen direct on his eyes when he was a kid fleeing from Tibet along with his parents on the back of a Yak.

Another welcoming home for the Tibetan old people is at Rajpur, where a neat and bigger building was built by 41stSakyaTrizin on April 2011 unlike past low-spaced and small roofed house. Lobsang, the in-charge of the home said that this home is under the Tibetan Homes Foundation Mussoorie and there are 59 old people at the moment and 99 rooms including staff rooms which consists of four motherly women undertaking the responsibility of their cleanliness, two cooks and the in-charge himself. Out of 59 people, almost 30 of them could neither walk well nor move freely and so their foods are served in their respective rooms.

Richoe, a 74 years old person said that he is generally an army and has no one as a family. He has been thus staying in old people's home for over eight years now. He was shifted from Lakhandpur old people's home where many ex-armies live in. Another old man, Phunstok, 70 years old told that he is from Kollegal Settlement of the south India. Although he has no children but has some close relatives that remain busy in their life but they sometimes manage to come and meet him with some good stuffs.

The old people's home at Deckyiling settlement is private and has just one person. The senior aged people should be taken care as a new born child for they are in the midst of their second childhood stage of life. They should be served with affection and smoothness as they must remain calm, relaxed and loved for the remaining and counting days of their life.