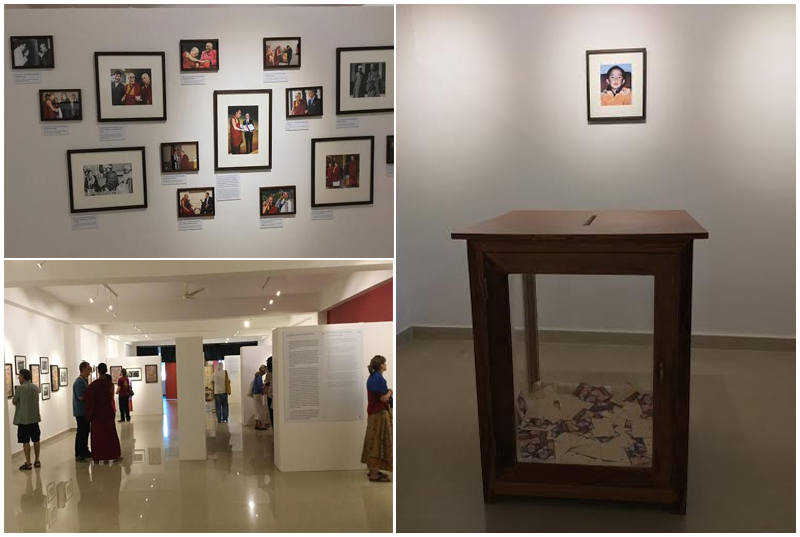 Bylakuppe, Mysore, South India — Tashi Lhunpo Monastery now houses a permanent display at the Gyalwa Yabsey Museum featuring a pictorial journey of the lives of His Holiness the XIV Dalai Lama and His Holiness the Panchen Lama. The exhibit includes rare glimpses into the lives of the two Tibetan masters with a section dedicated to photographs of them together and two other sections depicting their individual life stories,

The name of the museum, Gyalwa Yabsey, is taken from the Tibetan "Great Father-Son Duo, the description given by the Tibetan people to the relationship between the two based upon the recognition of each other's reincarnation. The Tashi Lhunpo monastery has dedicated this exhibition as "an expression of the Tibetan people's collective gratitude for the combined great deeds of the great masters of Tibet."

"This museum is dedicated to His Holiness Dalai Lama and His Holiness the Panchen Lama as an expression of the Tibetan people's collective gratitude for the combined great deeds of the great masters of Tibet," said Khen Rinpoche Kachen Lobzang Tsetan, Abbot of the Tashi Lhunpo Monastery.

"The Dalai Lamas and the Panchen Lamas have accomplished many great deeds for the benefit of all sentient beings, and throughout Tibetan history have worked tirelessly to safeguard the well-being of the Tibetan people. His Holiness the 14th Dalai Lama and His Holiness the 10th Panchen Lama have continued that legacy -- one on a global scale in exile and the other, inside Chinese-occupied Tibet. Through this museum, we pay tribute to their life and legacy," Said Venerable Lobsang Dorjee, President of the Tashi Lhunpo Monastery's Central Association of His Holiness the Panchen Lama.

On display are fifteen Thangkas painted by Artist Kaisang Damchoe whose studio is in Dharamashala. The thangkas depict some of the main events in the Dalai Lama's life ranging from his birth in Takster, Tibet to his 80th birthday in 2015. Photographs in the exhibition include His Holiness from his official recognition in 1939, meeting with world leaders and humanitarians, and family photos I with his mother and siblings.The photographs on the life and legacy of His Holiness the Dalai Lama in the book and the museum were contributed by Tibet Museum, Dharamsala.

There is a display which shows a series of photographs of life in Tibet after the invasion by the Chinese Communist in 1959. The burning of religious artifacts, mistreatment of the Tibet people in Lhasa, and photos of resistance fighters are among some the images that flash across the screen.

The archived photos of the 10th Panchen Lama's life trace his story from his discovery and later enthronement which occurred on April 15, 1944 . The exhibition includes a powerful image taken on September 18, 1964, where he is being subjected to one of many "thamzing," a struggle session in which he was verbally assaulted and humiliated in public.

The museum also has on display a handful of Tibetan soil that was smuggled by artist Tenzin Rigdol and an installation of netted fabric through which landscape images of Tibet are projected, allowing visitors to walk through the projected images.

A pictorial book, "Gwaya Yabsey" was released by His Holiness in conjunction with the Consecration Ceremony with the first copy presented to the Dalai Lama on December 19, 2015. His Holiness could be seen looking through the book during the ceremonies, from the expression on his face, which ranged from smiles to,sadness, it was clear he was very moved by the photos. The pictorial book, which was released by His Holiness, was authored and edited by Ven Lobsang Dorjee and Tenzin Pema Chari Sharma. The book was designed by Tenzin Thinley. The book includes a section on the two masters together and individual sections on His Holiness the Dalai Lama, His Holiness the Panchen Lama and the Tashi Lhunpo Monastery.

"We have seen great interest for the Gyalwa Yabsey pictorial book from all sections of the society, after His Holiness the Dalai Lama launched the book and was visibly moved by the contents. The first print edition of 1,000 copies is now over and the Tashi Lhunpo Monastery intends to print this again to meet the high demand," said Tenzin Pema Chari Sharma.

Gyalwa Yabsey Museum evolved from the travelling photo exhibit, which was organized by the Central Association of His Holiness the Panchen Lama on the life of His Holiness the 10th Panchen Lama and inaugurated by His Holiness the Dalai Lama in 2009 in Dharamsala. Thereafter, it made its way to Bodh Gaya, Varanasi, Ladakh, Bylakuppe and Bangalore in India and Washington D.C., USA. The Museum was curated by Ven Lobsang Dorjee, Tenzin Pema Chari Sharma and Gayatri Ganju and designed by Gayatri Ganju and Avani Tanya. The Museum was sponsored by the Neil Kreitman Foundation, USA in memory of Late Ruth Hayward, Panchen Lama Tashi Lhunpo Project, USA.