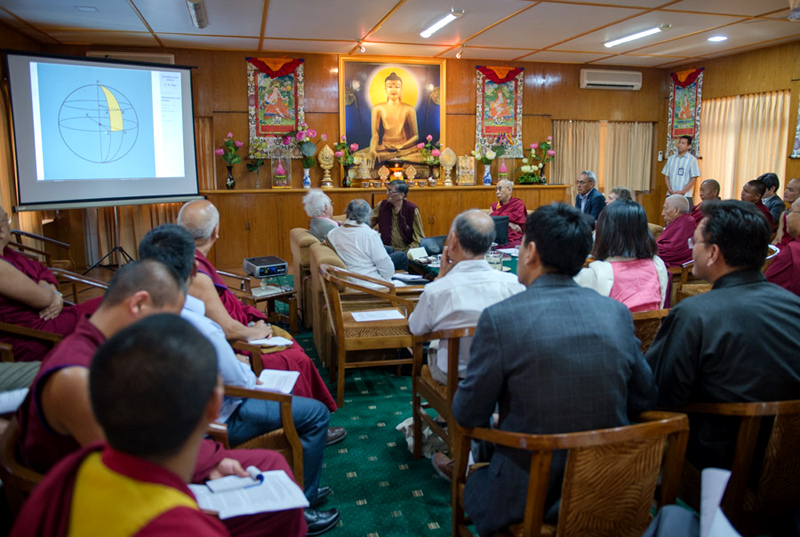 His Holiness the Dalai Lama took part in a discussion "interactive query in the field of Ancient Indian Philosophy & Modern Science" along with scientists, academicians and scholar here in Dharamshala, India, on April 29, 2016.

Dr Come Carpentier de Gourdon spoke on the role of ancient civilization in creating and fostering the growth of knowledge and basic knowledge as a subset of cultural and ancient knowledge. He mentioned a three fold method to classify different levels;

He holds the view that we need again in this time to look again and again at what we know. the need to look in the past and find the parts that can be useful to us but has been ignored or forgotten further the nature of science in the sense that where it ends and begins is something that can never be ascertained as its practically limitless and in man cases has been seen as a part of cultures around the world.

He also spoke of aspects of natural science which in history has puzzled the founding fathers of science as we know them today. Yes, I am referring to stalwarts in the field of science like Archimedes to Newton to a present day man who at times has thought about the things that were mentioned by Dr Gourdon. He talked about the nature of life and being human; the aspect of where we humans came from and where the are going.

Role and connection with environment which must take an approach to ecological equilibrium which has been seen recently in the formation and wide support the world has seen for the Paris Climate Agreement. The relation between the body and spirit was also stated as a sound base for physical and mental health; here it is important to note that his holiness proposed the use of the word mind instead of spirit as according to him spirit is a term that has too wide a connotation.

Professor C K Raju, a computer scientist, mathematician talked about the relationship between cultures around the world and how they influenced mathematics as we know it today. He spoke about various aspects like shunyavaad which he preferred to refer to as zeroism.

He made a connection between Buddhism, science and mathematics. He also talked about similar underlying principles Prtyaksha(Empirical knowledge) and Anumana(inferred knowledge) which are common to Hinduism, Buddhism and science. This lead to his perception that principally they rest on similar grounds. Science regardless is considered valid knowledge and was stated by him to be compatible with Buddhism only when the cultural influences are removed and viewed objectively.

He also remains critical about mathematics being a field where empirical knowledge is absent and mentioned unnecessary complications plaguing the subject. Making two important observations he stated that there is no unique or universal notion of infinity and that the meta physics of set theory are so complex that most mathematicians in India do not understand it.

He also pointed out specifically that the archaic system of education in relation to maths needs to change. Talking about it one important observation of significance was pointed out which said that Euclid is considered erroneous by modern mathematicians but still taught in schools in India and Europe. He also proposed several areas of further study like Maths based on Zeroism, Calculus without Limits, String Geometry, Statistics for Social Science(and ethical Business) and computing with floating pointers.

His Holiness made some pertinent observations and brought out certain pointers, just sharing a light moment he says to the scholars "For you more knowledge but, for me more confusion". He also spoke about the fields of cosmology, New biology, quantum physics and psychology and how they could relate to Buddhism and its principles.

His Holiness said "When we say re-engage with scientists, we need to see the principles, Buddhism, nirvana and Buddha-hood, I think very important part of Buddhism. We are not even discussing with scientists about next life. We are discussing about mind; different levels of mind in the most subtle level of consciousness where we see there is continuation, so you see there is no end."

"Buddhist science means about physical self and also cosmology; as we take in new knowledge some of us feel we are outdated but I partly reject it. Scientifically you can prove it does not exist but, again you see cosmology has no beginning. If there is beginning certain thing without cause must not happen; for example permanent subtle particle - no beginning like that. If you believe in Big Bang, then you need to find the cause of such a big explosion. There has to be an immense sort of pressure to cause such an explosion; without cause it cannot take place. The particle also comes from some cause." Explained by His Holiness putting forth the logic behind no creator in Buddhism.

The Nobel peace laureate talked about Buddhist science of being a study of primarily psychology to tackle human problems arising from the mind. Consciousness similarly has no beginning or end. Also mentioning his admiration for the depth of knowledge of the scholars he mentioned that appearance and reality itself being contradictory in many cases explaining Nagarjuna's philosophy as it exists because of something, its due to a reason that being the search for the truth.

Explaining that all living beings need to be nourished to survive from the thermodynamic(energy) point of view. Based on operational point of view he mentions that reactions do not need information or learning to come from outside. Giving an example of a dog he said " A dog is a dog, if you kick it, it will react like a dog not a cat."

"The problem is," His Holiness remarked, "that although our basic nature is to be kind, affectionate and compassionate towards others, and we tend to be like that as children, we seem to lose these qualities as we grow up. We no longer feel the need to care about others, exploiting them, bullying them and lying to them instead. We become inured to others' suffering so that if a tiger kills someone it's news, partly because its something that scares us with its claws and teeth; on the other hand humans have really well shaped teeth and nails, but when there are reports of people killing each other, we are almost indifferent to them."

Professor K Ramasubramanium, an academic in the field of Astronomical mathematics and ancient Indian philosophies talked about the common heritages shared by both Tibetan Buddhist and Indian cultural knowledge. One thing he stated is that Indian astronomical traditions are distinct from western traditions in the fact that it is kept open to alteration. The understanding that clearly emerges here among numerous astronomical models is that validity has nothing to do with reality, and anything that helps to arrive at a conclusion is valid.

He mentioned that study of illuminating objects is called Jyotishastra and its purpose was Kalanirnaya(finding the time) unlike Buddhism Kala is not abstract in Jyotishashtra it was said to be determined by the motion of objects around you. The objects primarily in question were the sun and moon to which Tithi is related.

Another name mentioned was Kala Vidhana Shashtram(study of finding time). Hence Desha - Kala - Dik became important. Where a person stayed also influenced the study i.e. nearer or far away from the equator. One more important observation was made on the work of John Play-fair who studied tables that went from India to Europe in the 17th century.

Professor Pierluigi Luisi, Italian chemistry professor mentioned that all things which are born are part of nature. He made an observation as to where scientific research is leading and how it leads to Indo or Indo-Tibetan Culture.

Drawing on a example he mentioned how a forest is made out of separate trees but, if we just take the trees into account and not the innumerable life forms which depend on it then we'll only be seeing the surface; he showed how millions of microorganisms also have a role to play and the network we see is only a fraction of the real picture.

In the same way he theorised that the universe is a complex process and even seemingly useless things might be very essential for its survival.he even drew an analogy from the Bhagvad Gita where it is explained as a game of dice.

"Certain things that are not very clear, give us the opportunity to further investigate and further analyze. If everything is obvious then there is no need for this (quest to uncover). The mysterious things, the dilemmas give us real opportunity to use the human brain to the maximum way," the Tibetan spiritual leader said.