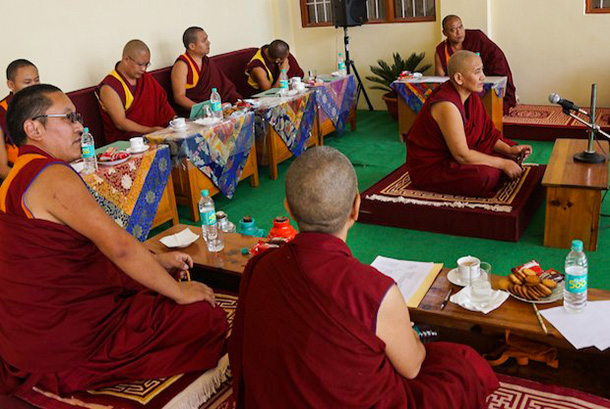 Dharamshala — "Earning the Geshema degrees marks a turning point for the nuns," the Tibetan Nuns Project said adding that "this degree will make them eligible to assume various leadership roles in the monastic and lay communities."

In 2012 the Geshema degree was finally conceded to allow Tibetan Buddhist nuns to sit for exams. Prior to this, the Geshe degree was only open to monks. With the commencement of the Geshema degree the first batch that started the process of examination in 2012 has created history by becoming the first Tibetan women to successfully pass all the exams.

Not only this, all twenty nuns have achieved success in acquiring the Geshema degree, equivalent to a Doctorate in Buddhist philosophy. Exam results were announced by the Department of Religion and Culture of the Central Tibetan Administration. The good news is that "all 20 candidates for the degree passed."

"Their success fulfills a longstanding wish of His Holiness the Dalai Lama and marks a new chapter in the development of education for ordained Buddhist women and is a major accomplishment for Tibetan women," the Tibetan Nuns Project (TNP) said in its latest statement.

The Geshema degree (a Geshe degree when awarded to men) is the highest level of training in the Gelugpa school of Tibetan Buddhism. These women pioneers have accomplished a level of scholarship and Buddhist training that, until recently, was only open to men.

The Geshema examination process is an extremely rigorous one that takes four years in total, with one round per year each May. During the 12-day exam period, the nuns must take both oral (debate) and written exams. They are examined on the entirety of their 17-year course of study of the Five Great Canonical Texts. "In 2011, a German nun, Kelsang Wangmo, who spent 21 years training in India, became the first female to receive the Geshema title," the TNP said.

It is said that "the new Geshema nuns will formally receive their degrees from His Holiness the Dalai Lama at a special ceremony at Drepung Monastery in Mundgod in southern India."

TNP stated that "this occasion is also a milestone for its project, which was founded in 1987 to provide education and humanitarian aid to Tibetan Buddhist nuns living in India. A number of the Geshema candidates were illiterate when they escaped from Tibet. To reach this historic milestone, the project had to build an educational system from the ground up.

“Educating women is powerful,” says Rinchen Khando Choegyal, Founder and Director of the TNP. “It’s not just about books. It is also about helping nuns acquire the skills they need to run their own institutions and create models for future success and expansion. It’s about enabling the nuns to be teachers in their own right and to take on leadership roles at a critical time in our nation’s history.”

"Earning the Geshema degrees marks a turning point for the nuns. This degree will make them eligible to assume various leadership roles in the monastic and lay communities, previously reserved for men," the TNP further said.

The Tibetan Nuns Project supports 7 nunneries in India as well as many nuns living on their own for a total of nearly 800 nuns. Many are refugees from Tibet, but the organization also reaches out to the Himalayan border areas of India where women and girls have had little access to education and religious training.

The recievers of the first Geshema degree being women have reminded us of how Tibetans are the most successful refugees in the world, this is truly a historic achievement and having a hundred percent success rate, the women Geshema degree holders have carved a path and set an example for Tibetan nuns and other women respectively.