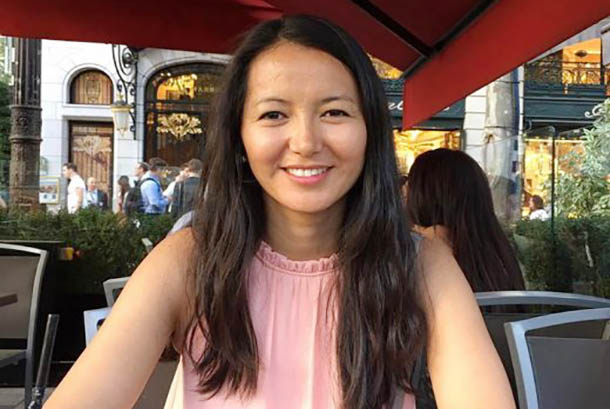 I want to begin by telling you about a conversation I had a few years ago with an older Tibetan woman. She had heard me talk about women's empowerment and gender equality on a couple of different occasions and she approached me one day with this really confused look on her face. She asked me why I was speaking out about gender equality, when in reality, genders are equal in the Tibetan community. She asked, "what are Tibetan women lacking in? Ngo-tso la gha-ri dik-ki min-dug pe?" And I must add, she was asking these questions from a very genuine and sincere place. So, naturally, we entered into a discussion about gender expectations and its impact on both men and women. After a while, we started talking about role of women in Tibetan Buddhism and how nuns, at the time, were not allowed to pursue Geshema degree. Now, for those of you who may not know, a Geshema degree is the highest level of training in the Gelugpa school of Tibetan Buddhism. The Geshema examination is a highly rigorous process that takes four years with examinations lasting 12 days each time. Candidates have to take both oral and written exams. And this is not including the 17-20 years on average that one has to study Buddhist texts to even qualify to take the exams.

So, anyways, when I shared with the older woman that I thought nuns should have the same right to earn Geshema degrees as monks have had, for centuries, to earn Geshe degrees (the male version of Geshema), she looked at me, genuinely perplexed, and asked if there was even a single Tibetan nun out there who could pass this test even if the opportunity was there. I remember being shocked at her inability to imagine a single Tibetan nun who could pass the Geshema exams.

But what my conversation with the older woman illustrated for me is the tragic ways in which we internalize the expectations that society places on us just because of our sex. It renders us unable to fully recognize our own abilities and strengths, and the abilities and strengths of other women. Prescribing gender roles and responsibilities constrains our ability to think openly, and to dream freely, and we go about setting these strict parameters around what's possible. It limits our imagination and inhibits our understanding of our own capabilities.

Let me tell you about this other conversation that I had recently with another Tibetan woman. She had grown up in Tibet and she still had a lot of family members there. She talked about the pride and joy her mother and sisters feel when they cook for their family. She said they were truly happy to take care of all the household chores that is expected of them. They are happy, she said, to be the last ones to eat. And if anyone were to insist for them to sit at the front of the table, or eat before other family members, she said there was no way they would do it. And although, she never said it outright, what I took away from that conversation was that she feels the way feminism and women's empowerment is being defined in the Tibetan discourse at the moment doesn't recognize the contributions and challenges of those women who didn't have the same educational and employment opportunities in life. It was almost like, she felt that the outspoken Tibetan feminists looked down upon women like her mother and sisters.

I remember having two very distinct reactions to what she had said. First, the Tibetan feminist movement and those individuals who are at the helm of driving this movement forward, must do a better job conveying our message of feminism and women's empowerment. Feminism is never about looking down upon another woman. It is not about judging other women for functioning within the parameters of their lives. Women's empowerment cannot be narrowly defined by how much education someone has and what kind of job the person has. We have to recognize the agency that many women exercise in their daily lives, in ways both small and big, and try to bring along as many men and women into this movement from various backgrounds and not make them feel alienated.

Second, I thought, if given an alternative option to choose a life other than being the primary home-maker, what choice would have this woman's sisters and mother made? Would they choose to forego a chance to perhaps seek higher education, seek employment outside of home, or would they still choose to stay at home. At the end of the day, I think all this advocacy around gender can be boiled down to freedom of choice. The freedom of choice for both boys and girls to be who they are, and not having to give in to society's imposition or expectation of how they should be.

For me, women's empowerment is all about recognizing the different talents, skills, and natural inclinations that we have as individuals. For me, women's empowerment is about all of us working together to create a conducive environment for young girls to explore their interests to the fullest extent possible, giving them a chance to discover themselves and define for themselves what their priorities are in life.

As Tibetans, I know that our collective biggest priority is our political struggle. It is our shared dream to see His Holiness the 14th Dalai Lama return home to a free Tibet. We want the political repression in Tibet to end and we want our brothers and sisters in Tibet to have the kind of freedom that you and I take for granted living in a free and democratic country. But for us to make this dream a reality, we need the best minds among us to be engaged in our political movement. We need the most committed among us, the most patriotic, the most skilled among us to be involved.

We need a deep bench of activists, of political leaders, thought leaders, and artists involved in the political movement. And a sure way to not have a deep bench is by tapping into the potential of only half our population. I mean, look at the makeup of our current leadership– be it the parliament, the Kashag, heads of Tibetan civil societies. They are mostly men. There is so much untapped potential that Tibetan women have. There is a lot that women can contribute to our political movement, but for us to do that, we need to be sitting around the table. We cannot contribute if we are not there.

So, the Tibetan society really need to consider carefully why there is a dearth of female representation in the leadership positions. And it cannot be all chalked up to just women not taking individual responsibility. There is some of that, I admit, but there is also the looming patriarchal values and beliefs that is so infused in our culture and in our way of life, that we, as a society, do not produce enough women who are confident, women who are strong-willed, and women who are ambitious.

Finally, I want to end here today by going back to the question that the older Tibetan woman had asked me about whether there was a single Tibetan nun who could pass the Geshema exams. Well, her question was answered very soon afterwards, when the historic decision to allow Tibetan nuns to sit for Geshema degrees was made in May 2012, at a conference that included representatives of the dharma community. And as of July 2016, twenty Tibetan nuns sat for their fourth and final year of Geshema examinations, and all twenty of them passed. They are due to formally receive their degrees from His Holiness the Dalai Lama in a special ceremony some time later this year.

Whenever I think back on this conversation that I had with the older woman, I am struck by how – for a woman of her generation, the idea of a Tibetan nun passing Geshema exams was almost unimaginable. And for you and me, it's something to celebrate. And for the next generation of women, it will be something they take for granted. And that, to me is indicative of the positive change in how we, the Tibetan women, are beginning to view ourselves. We need to continue on this progressive path, so that the women who are younger than us won't have to doubt their own abilities so much and can grow into confident, strong-willed, and empowered Tibetan women.

The First Tibetan Women's Empowerment Conference was held in Queens, New York on October 8th & 9th of 2016. It was a two-day conference filled with energy, enthusiasm and a passion for women's empowerment. It included over 30 participants, two full days of speakers, a panel, a screening of Legal Awareness of Tibetan Women in Exile from the Central Tibetan Women's Association, and many group sessions and workshops.