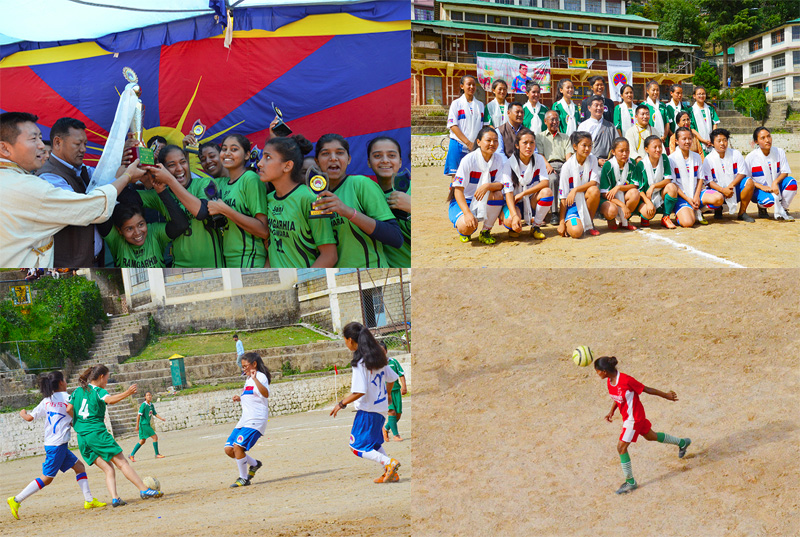 Dharamshala, June 7, 2017— TPI reporter Chandreyi Mukherjee had the opportunity to witness the exhibition match played between the girls of the TCV school and other students from different parts of India who had been invited to showcase their skills for the final selection of the Tibetan girls football team.

The match was organised by the Tibet National Sports Association (TNSA) and the Tibetan Women Association (TWA), both organisations’ presidents whom I also had the pleasure of speaking with.

“We have an existing team but we wish to upgrade our team. Better players keep coming up which is why we’re extending this opportunity to the school level as well as graduates. We have 37 girls who have registered and out of that, we have to select a total of 22. It’s really a happy moment for us to watch girl’s play football. I want to have a strong team.” said Mr. Pasang Dorjee, secretary of the TNSA.

On inquiring about women’s role in sports, Sister Dolma Yangchen, President of the TWA said, “This match is a collaboration between the Tibet National Sports Association and the Tibet Women’s Association. This is the first time we’re organising a football match for young women. We must encourage women to come out and be more confident and participate in most of the games and do so especially in Dharamshala. We at TWA, are working very hard to empower women.”

TPI learnt that TWA as an organisation is inclusive as they try to raise awareness amongst women of varied educational backgrounds and help all ages, “We have women’s teams in Tibetan settlements but that consists of older, married women. We were to draw more women from other parts of the country but due to familial responsibilities, it is difficult for them to come and spend nearly a month. The girls who are playing today can become national level players, international too, so the main thing is to encourage them to compete with men also. They become more bold, they come more confident. This is a chance to take.”

Witnessing young women on the field is always a welcome change. It is safe to say that the highlight of my day was engaging in conversation with these ladies who are setting an example for girl’s in their community.

Bold on the field, but shy in conversation, 18 year old Tenzin Choekyi told me about her love for the sport and where it springs from, “We like football because it makes us happy and it releases our stress and all. Actually we don’ play because we are forced to but because we genuinely love the game.”

Her attention drifting to the muffled cheers from the match between the Jalandhar and Amritsar girls, she mentioned that the preceding game which she played was indeed an exhibition match. “We’re going to get selected for representing Tibet, we feel thankful for being given the opportunity to be able to do so.”

Miss Tenzin’s team member, Dekyong spoke of her cultural heritage and how football is ingrained in their blood, “I’m from Dehradun, Clemen Town and over there everyone loves football. Even the old people love football.”

“I love playing football because it gives me relief and kicking the ball really feels like keeping away my fear from the crowd. I feel really good when I’m playing in front of all the Tibetan crowds,” Miss Dekyong revealed further.

A vocal Miss Tsering Tso expressed her thoughts as to why she thinks it is important for more women to play football, “Because if we play football, we can empower women by saying, We can do it, We can do anything boys can do!” The very act of a playing football is gallant and by making this conscious choice, these passionate girls are role models to the younger generation in existence. 14 year old Yeshe Tsogyal spoke of the special sensation she feels while playing football. “I feel powerful just being out on the field. Several times, the girls aren’t given a chance to play that’s why the government has given us more of a chance to play football.”

The girls unanimously agreed that they would feel proud representing Tibet. Despite their country being in exile, they would have an opportunity to showcase their talents abroad. As the captain mentioned, “Whether we win or lose, our main purpose is to show our Tibetan personalities: compassionate, loving and caring”.

As the match between Jalandhar and Amritsar came to a close, the former swept the trophy in a penalty shoot out. Both teams walked away proudly from the game, each girl gaining something in her own manner.

The bike ride down the mountainside was beautiful and got me in a contemplative mood: What it boils down to is that we, collectively, men and women, need to do more about gender equality. We need to pave the way for girls, just as we do with boys. There should be no disparity in sports, nor in the workplace, nor in life. Women and men should be seen as, and treated as, equals in all respects. Gender should not be the thing that defines us or separates us from our fellow athletes.