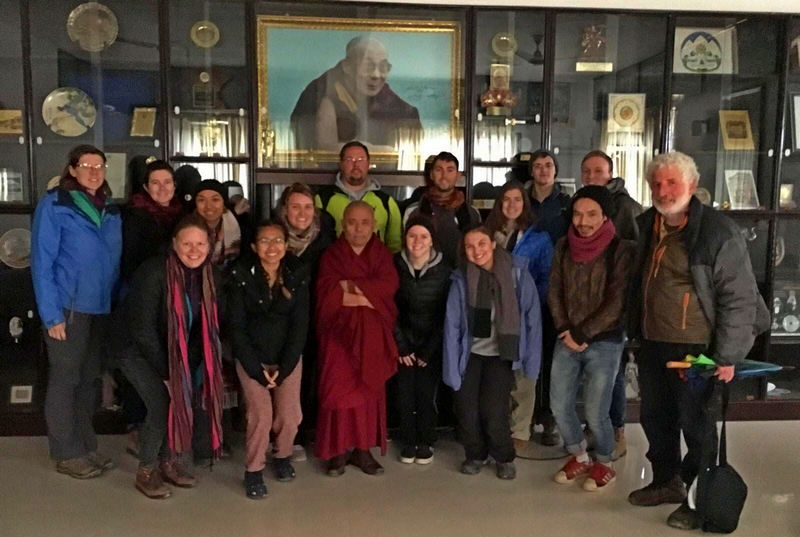 Dharamshala — Every December since 2000, a group of 10-20 students from The University of Denver come to Dharamshala to experience first hand the city's unique learning opportunities. Through their presence and energy, the students strive to learn and show support to the Tibetan population in exile and increase international awareness of the Tibetan cause.

First led by Roscoe Hill, a professor in the Philosophy Department, the class originally focused on comparative religions of India. Hill was intent on establishing connections with local individuals and groups in and around Dharamshala. By doing so students are able to obtain an in depth and circumspect view of India and Tibet.

Since 2015, the class has been led by International Studies Professor Alan Gilbert and has evolved into a unique international service learning course that is the pinnacle of DU's interterm program. Today the course focuses on the life and struggles of Tibetans living in exile while examining aspects such as human rights abuses, religious tolerance, and cultural studies.

Over the course of their three week stay, students have the opportunity to learn from local organization leaders and activists, teach English language classes, and volunteer with select organizations including Students For A Free Tibet and Gamru Village School.

Most mornings the students tour and hear from organizations such as the Tibetan Children's Village, Gu Chu Sum, and the Tibetan Parliament in Exile. In the afternoons students depart to their respective service learning volunteer positions which strengthens their understanding of the local community and provides a more personal, one-on-one educational experience. Evenings are spent engaging with Tibetans in exile during conversational English classes. On weekends students hike the Himalayan foothills and attend local events including the annual celebration of the 14th Dalai Lama's Nobel Peace Prize Award which takes place every year on December 10th at His Holiness' temple in Dharamshala.

Throughout their time in Dharamshala, students are able to engage with, and listen to, Tibetans who share incredible stories of struggle, perseverance, and triumph. Many voice their daring tales of perilous treks across the Himalayas, by foot, over the course of 30 or more days. Often food and water are limited as they journey towards exile, where they remain today, until the dream of returning to a free Tibet can be realized.

Others, who were born in exile, share stories of their own struggles to relate to those who remember life in Tibet prior to fleeing Chinese occupation and repression. Groups of Tibetans, Indians, and foreigners, who champion human rights and freedom of expression, work tirelessly to preserve Tibetan culture for future generations. Hearing such tales and trials one cannot help but be profoundly and emotionally moved. Despite such hardships and anger, many Tibetans sagely share words of wisdom and mantras by which they live.

During their time in Dharmshala students gain a personal understanding and admiration of Tibetan culture and the nation's struggles. As a result, students hope to increase awareness of those who continuously fight for democracy and Tibetan human rights. The multitude of individuals and organizations in and around Dharamshala are beacons of the Tibetan struggle and need continued support. The Denver students believe their presence and efforts will show the Tibetans that there are individuals willing to stand with them in solidarity.