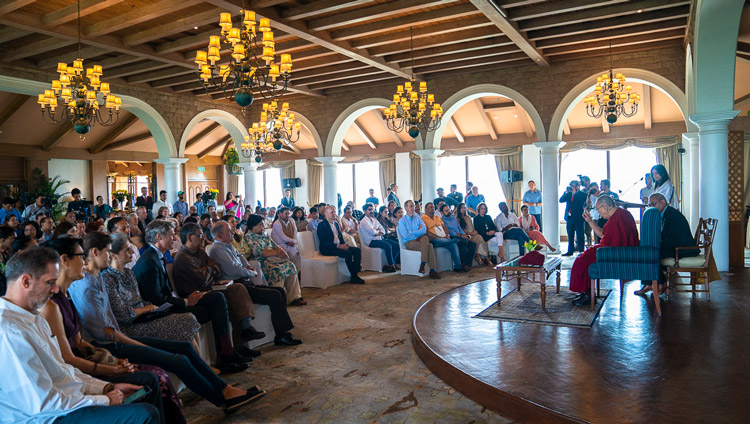 His Holiness the Dalai Lama during his meeting with intellectuals, academics and diplomats at the Taj Hotel in New Delhi, India on September 21, 2019. Photo by Tenzin Choejor

New Delhi — “These days, scientists tell us that basic human nature is compassionate. We are social animals who depend on the community in which we live. So we need to cultivate a sense of oneness of 7 billion human beings,” the spiritual leader of Tibet said, speaking to a gathering of diplomats, academics, intellectuals, and media, in India.

While speaking in India's capital New Delhi, on September 21, 2019, His Holiness the Dalai Lama spoke of the importance of basic human values such as compassion, loving-kindness, warm-heartedness, and an inner peace-based education system that the 21st century can be one of peace and compassion in the future.

When His Holiness the Dalai Lama met with a group of about one hundred intellectuals, he told them that as human beings we are the same; mentally, emotionally and physically, we are all the same. We have the same kind of brain and the same quality of intelligence. What’s more, we all want to live a happy life free from suffering.

“These days, scientists tell us that basic human nature is compassionate,” His Holiness explained. “We are social animals who depend on the community in which we live. Before they go to school children are open and friendly to each other. They don't care what religion or nationality their companions belong to, so long as they play together in a friendly way. Once they start school, however, they learn to pay more attention to secondary differences, such as religion, color, economic background and, here in this country, what caste people belong to. To counter this kind of discrimination, this sense of ‘us’ and ‘them’, we need to cultivate a sense of oneness of 7 billion human beings.”

His Holiness told the gathering that he has four commitments. The first is to help people understand that while we all want to live a happy life, the real source of happiness is within ourselves. Warm-heartedness makes you, your family, and your neighbors happier. His second commitment is to encouraging religious harmony, which is a long-standing tradition in India. He pointed out that we have different religious traditions because different people have different needs and mental dispositions—although all religious traditions convey a common message of love and compassion.

His third commitment relates to his being a Tibetan and someone in whom the Tibetan people have placed their trust. He clarified that since 2001, he has completely retired from political involvement, devolving those responsibilities to an elected leadership.

“Nevertheless, I remain concerned to preserve Tibet’s religion, culture, and language. In the 7th century the Tibetan king, Songtsen Gampo commissioned the creation of a written script modeled on the Indian Devanagari script. Then, in the 8th century, King Trisong Detsen invited the great scholar Shantarakshita from Nalanda University to introduce Buddhism to Tibet. The tradition he laid down belongs to the Sanskrit tradition, as upheld at Nalanda, that emphasized the use of logic and reasoning. It is this basis that allows Tibetan Buddhism to collaborate in discussion with modern science. The Nalanda Tradition also incorporates the practice of non-violent conduct—‘ahimsa’ and its compassionate motivation—‘karuna’.

“Finally, I am committed to seeking to revive an interest in the knowledge of ancient India, which had a thorough understanding of the workings of the mind and emotions. This, I believe, is very relevant in today’s modern world. I believe that here in India this knowledge can be combined with modern education to our common benefit.”

Responding to questions from the audience, His Holiness advised that when it comes to India-China relations it is better for the two countries to live side by side as peaceful neighbors. As to whether it is better to teach children about religion or basic human values, he suggested that religious practice is a matter of personal choice, but simple warm-heartedness benefits everyone.

He emphasized the need for study, not only among monks and nuns but even among laypeople. He recalled watching a Sikh student in Ladakh who has taken an enthusiastic interest in debate. He recommended that people explore the idea of ‘pratityasamutpada' or dependent arising. Because things exist in dependence on other factors, they are empty of independent existence. If we extend this notion to appreciate that our own happiness depends on others, we will better understand the relevance of compassion. He advised that if we cultivate loving-kindness, even our enemies can become our greatest friends.

Asked why common sense seems so rare, His Holiness observed that the modern education system introduced in India by the British pays little attention to training the mind. Consequently, people have no idea how to tackle their destructive emotions nor how to achieve basic peace of mind. He concluded with the reassurance that we can actually transform our minds and emotions---it takes time but it can be done if we steadily keep up the effort.