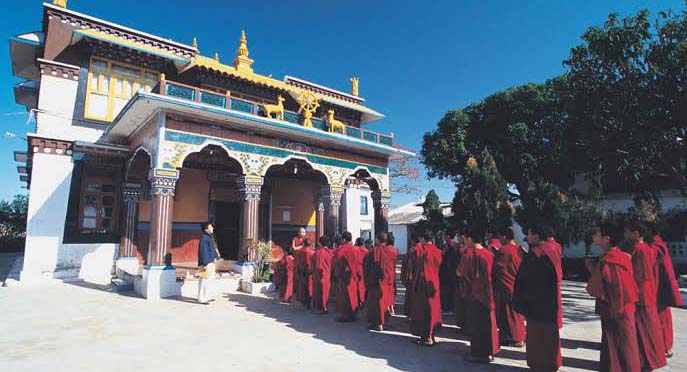 Mainpat, India — The Mainpat Phendeyling Tibetan Settlement was one of the first Tibetan settlements established by the Indian government in 1962 to rehabilitate the 1,400 Tibetan refugees who arrived in India after the Chinese annexation of Tibet in 1959.

Mainpat is a small hill station and a tourist spot in Surguja district of Chhattisgarh. It is also known locally as "Little Tibet" due to the presence of Tibetans living there. Mainpat was nothing but a jungle at that time and only a few local Indians dared to live here. It was an isolated place with beautiful scenery. The Tibetans built huts here and gradually evolved into the better dwellings they live in today.

Mainpat was one of the areas allocated to Tibetan refugees by the Indian government in 1963 as a result of the Chinese invasion of Tibet. Prior to that, the area was primarily home to Yadavs and tribes such as the Manjhi, Manjhwar, Kanwar and Pahadi Korwa. Currently, about 2,000 Tibetans live in seven resettlement camps in Mainpat, most of which have Tibetan Buddhist monasteries.

To know more about the place, the Tibetan population, and their lifestyle in Mainpat, TPI engaged in an exclusive conversation with Namgyal Dakpa, the Headmaster of Sambhota Tibetan School, Mainpat.

To learn more about Mainpat, its Tibetan population and their way of life, TPI spoke exclusively with Namgyal Dakpa, the Headmaster of Sambhota Tibetan School, Mainpat.

Interviewee: My name is Namgyal Dapkar. I live in Mampat, Surguja district, Chhattisgarh. I am the Headmaster of the Sambhota pre-primary Tibetan School in Mainpat.

Namgyal Dapka: Mainpat was the first Tibetan settlement allocated by the Indian government, provided by the Madhya Pradesh government in 1962 to settle 1,400 Tibetan refugees who came to India as a result of the Chinese occupation of Tibet in 1959. The population was spread over seven camps with a radius of 25 km, each with about 30 to 35 houses. The settlement has about 2 to 3 monasteries.

TPI: When and how did your family move here?

Namgyal Dapka: I was born in southern India. My parents took refuge in India shortly after the annexation of China in 1959, and they lived in refugee camps until 1964 when the Indian government gave us a place to live and allocated land to work on. I have been living in Mainpat for 15 years. In fact, my wife is from Mainpat and her family has been living here since 1964.

TPI: How many Tibetans live there and what is their livelihood?

Namgyal Dapka: There are about 2,000 Tibetans living here. Their main occupation is farming. They grow crops such as rice, mustard and potatoes throughout the year. Some also move around India selling clothes such as gloves, sweaters and other winter clothing during the two to three months of winter. This is because the income from farming is not enough to support the family, so members who do not have jobs go around with the group to sell winter clothes.

TPI: Even though you are far away from your homeland and surrounded by so many people who do not share your culture, how do you manage to hold on to your roots and maintain your cultural identity?

Namgyal Dapka: Thus, when the first wave of Tibetan refugees arrived in India in 1959, former Prime Minister Jawaharlal Nehru affirmed to His Holiness the Dalai Lama that Tibetans would be allowed to enroll in any school and university within India. But the Dalai Lama insisted on obtaining a separate educational structure so that Tibetan children could learn about their culture, community, language and religion.

So, the first Tibetan school got in 1961 in Mussoorie, Uttarakhand, and then at the same time, every settlement got a school where we all grew up and learned our culture, religion and language. And the stories and teachings of our parents helped us learn a lot about where we came from and cling to our roots. We all still talk in Tibetan, although living in India and being surrounded by so many Hindi-speaking people has influenced us because we sometimes use Hindi or English words in our conversations. This is like Indians talking in Hindi or using English words in their conversations. In addition, the monastery guides us and teaches us about our religion and its philosophy. The Indian government has also been very supportive and helpful in preserving our culture without meddling.

TPI: Please share more about the education in Mainpat.

Namgyal Dapka: As I said earlier, schooling follows the Tibetan educational structure. The educational facilities in Mainpat allow the children to go from first grade to fifth grade. The children are taught in Tibetan, with English language added to the curriculum in the fourth grade. After the fifth grade, they receive their secondary education in other schools in Himachal Pradesh or elsewhere. But there are no restrictions and anyone who wants a modern education has the right to enter any school they want. Therefore, since 1963 we are under the protection of the Indian government and with support of the Indian government many of our fellow Tibetans have become doctors, teachers, nurses, etc. The Indian government has given us a lot of support in terms of self-reliance and self-sufficiency.

TPI: How do you all celebrate Tibetan festivals?

Namgyal Dapka: The main holiday we celebrate is Losar, which according to our lunar calendar is the New Year. According to the lunar calendar, the New Year falls at the end of February. Apart from that, we celebrate the birthday of His Holiness the Dalai Lama on July 6 every year and the celebration lasts for 2-3 days. There are games organized for the elderly, children prepare dances, and young people participate in sports competitions such as soccer and volleyball to enjoy and spend quality time with everyone. In addition to our Tibetan festivals, we also celebrate Indian festivals such as Holi and Diwali.