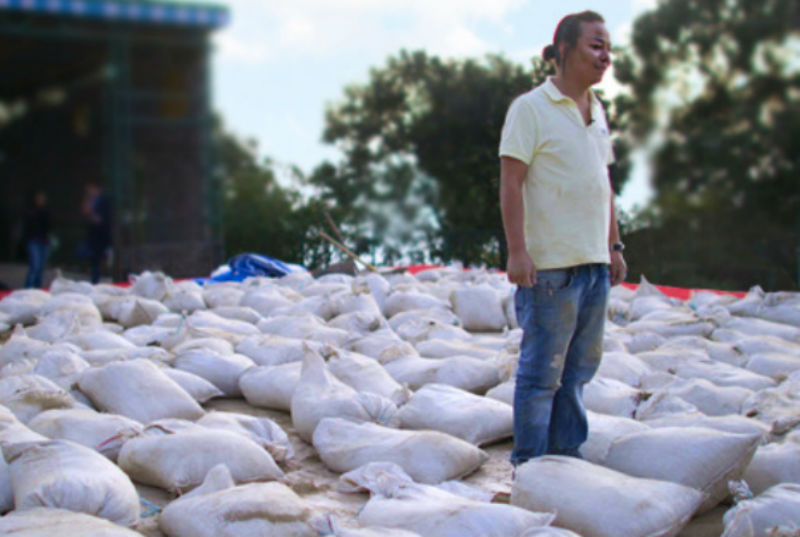 Dharamsala:- A former Dharamsala resident and filmmaker, Tenzin Choklay, now based in New York, had hid home premiere of the documentary, Bringing Tibet Home, to a packed auditorium on the evening of November 1.

Tenzin’s childhood friend, Tenzing Rigdol - contemporary artist is the film’s subject. Bringing Tibet Home centres on the efforts of Tenzing to smuggle 20,000 kilos of Tibetan soil across the border into Nepal and ultimately to an art exhibition at TCV – ‘Our Land, Our People’ - which explored the nature of nostalgia and homecoming. For many Tibetans born and raised in Dharamshala, it was the first time they had touched Tibetan soil.

Bringing Tibet Home opens with Tenzing Rigdol in his studio in Queens, New York. Although he looks the part of a New Yorker, Tenzing describes the sense of incompleteness he feels as a refugee. He can laugh, but not fully - he is in the United States, but of nowhere. His work, a fusion of classical thangka elements and political critique, reflects these themes. Buddhas and Bodhisattvas are made from collages of protesting monks, Chinese yuan and streaking laps of fire, symbolising recent Tibetan self-immolations. Tenzing interprets his work as a reflection of his inner feelings and the world as it is, not an overt critique of power. “People say my work is political, but I’d say it’s just honest,” he says.

When his father died of cancer in exile, having never fulfilled his dream of returning to Tibet, Tenzing hatched an ambitious plan to bring Tibetan soil from Shigatse to Dharamshala. The film documents the unexpected problems his plan encountered – from bribing capricious officials at international borders, to work delays and the ambient fear of being thwarted by officials and spies. Holed up waiting in Kathmandu, Tenzing anxiously smokes cigarettes and checks his phone for updates. When all appears lost, he visits a local monastery and enlists the help of monks who recite mantras for dispelling obstacles.

In the end, after 50 check posts and 2,000 kilometers, the soil was transported via Banbasa to Dharamshala. In a private audience with the Dalai Lama, Tenzing presented a platter of soil wrapped in a white khata. At the screening, the audience erupted in applause when His Holiness traced the word ‘Tibet’ with his finger in the soil and expressed hope about one day returning to his home country.

After the exhibition, the soil was taken away by thousands of Tibetans, and can now be found in prayer rooms throughout Dharamshala – a reminder that, for many, Dharamshala is a home away from home.