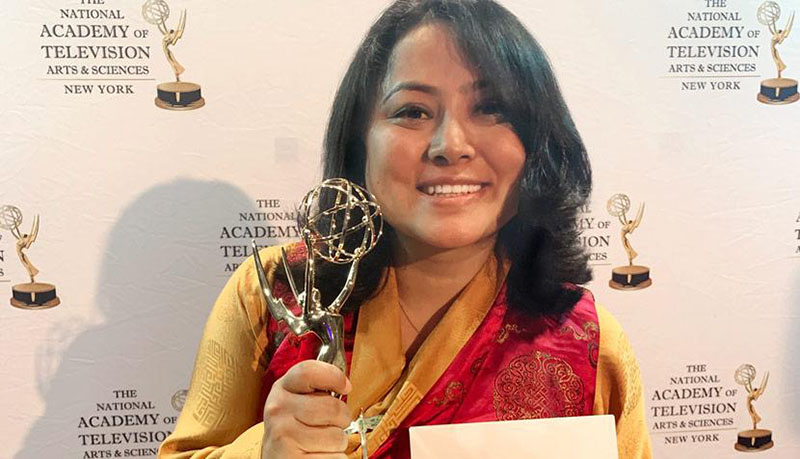 Dharamshala, India — A young Tibetan woman has won the prestigious America TV award, the Emmy for a category in video production on Saturday, May 4, 2019. The young woman has raised a patriotic Tibetan slogan in her acceptance speech at the award ceremony.

According to a report from the Tibetan government official media, Dolma then cheered with the award in her hand, “For all of the adult education educators doing incredible work with limited resources, for the 3.2 million immigrant New Yorkers, making America great again, and again and again. Bhod Gyalo!” Bhod Gyalo is a Tibetan patriotic phrase which translates as “Victory for Tibet”.

She was creator and supervising producer for “Rolando’s Rights,” produced by We Speak NYC, a civic education initiative of the New York City’s Mayor’s Office of Immigrant Affairs. The New York chapter of the National Academy of Television Arts and Sciences announced the winners at a ceremony Saturday at The Marriott Marquis in Times Square. The video and its seven-member team won in the Informational/Instructional category.

“I hope we can translate this win into increased funding for our program and other adult education programs,” Dolma said. “Adult education is essential to inclusion but an underfunded and underserved field.”

Dolma, a first-generation college student from Queens, was involved with the project since its inception in 2009 and returned after graduate school to revitalize the program after We Speak NYC was injected with funding for new content, including seven new videos.

“Although I am transitioning careers from education and public service to the legal field, I think the key lesson I received from the win is that we are as good as the community around us,” she said. “I was able to do good, useful work because I had a community around me to help accomplish that work. In the legal field as well, I hope I will get the opportunity to build that community to be a more effective lawyer.”

Dolma received a bachelor’s in English literature and political science from the Macaulay Honors College at the City University of New York and an M.Phil in international relations from the University of Oxford.

In 2017, Tenzin Wangmo was awarded the prestigious Daytime Emmy Awards during the 69th Emmy Awards. The Tibetan TV producer was reportedly the first ever Tibetan to have been honoured with such a prestigious award in the field of journalism and entertainment.

Wangmo and her colleagues have been awarded the Daytime Emmy Awards for the year 2017. She was working as a producer Good Morning America, a TV show aired on ABC Network. She has previously been nominated for the award several times according to the sources. She is a first generation Tibetan-American Journalist/Producer with ABC News in NYC. Wangmo graduated from Columbia University’s Graduate School of Journalism with a Masters in Broadcast Journalism.