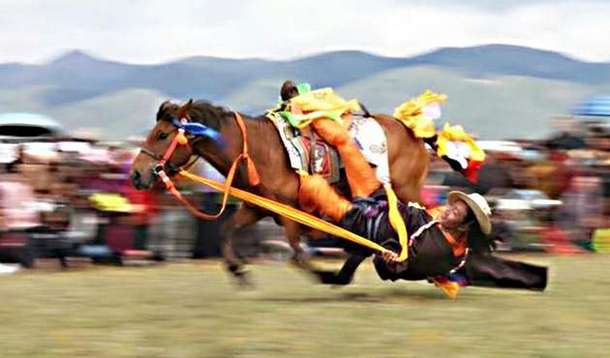 Dharamshala, India — Involving extraordinary horsemanship and talents, Tibet is known as the Roof of the World has numerous ancient Sports and Games. People of Tibet also additionally play a large number of the other progressively modern sports that the world plays today. Sports such as polo, horse racing, horsemanship, archery, wrestling, two-man tug of war and yak racing are some of the Tibetan sports they play to date.

Horse Racing is one of the most traditional and culturally popular sports in Tibet. It has been around for as long as the horses have been around and it is still one of the most favored games among Tibetan people. Every year this sport is organised in the grasslands or agricultural areas in the roof of the world. The races that take place are normally 10km long. Usually young Tibetans participate in this race and they race without saddles on the back of the horses.

It takes a great amount of horsemanship to acquire that great skill. The traditional Horse racing festival takes place for ten days. But they usually don’t last that long, unless it is a big festival that is held every two or three years. During the festival, there are multiple horse races and entertainment programs. In the celebration, individuals wear special dress and show stunning horsemanship aptitudes.

Horsemanship in Tibet is tested and participates in the competition by snatching items off the ground, such as traditional white scarves. The riders are in full gallop and really show off their skills riding horses. Participants in the events usually wear fancy clothing and decorate their prized horses with many colors and bells. Horsemanship is also tested by shooting targets while on a horse at high speeds. The top three places of Tibet for horse racing festivals are;

Yak racing in Tibet has become an integral part of the Horse Racing Festival in Tibet. In this event, people race over small distances in a full out sprint against other competitors who are also mounted on a yak. The person who is riding the yak usually carries a whip to make the yak move faster over the short distance. It is also a common sport in the farming and stockbreeding areas on the Tibetan Plateau. They hold yak racing events annually to celebrate the good harvest, and they pray for good weather during the coming year.

Polo is the most ancient team sport in Tibet. Players sit on horsebacks with a mallet and it uses to hit a ball into the other teams’ goal and score a point. The objective of this game is to score as many points as possible. As a result, more scores means defeating the other team and winning the match. Polo in Tibet can date back to the early eighth century. And, it was a very popular sport for a long time, but now its popularity is decreasing. Tibetan people are now trying to restore polo. So that it can once again become a popular sport in Tibet.

Archery is an offshoot of hunting Tibetan sports. It is very popular in Tibet and people arrange many Archery contests and challenges. In such competitions, watching the top shot is the most attractive part and people enjoy it the most. Archery in Tibet is not quite the same as other places because of the arrows they use. Tibetan arrows whistle in the wind when shot from the bow.

There is a festival held in the grasslands of Tibet where archers compete and shoot their bows at targets. In this festival, there are many different types of shooting that includes short-range shooting, long-range shooting and shooting on a horse from a gallop. The festival usually lasts three days and tents are set up around the archery grounds.

Wrestling is also widely considered to be one of the oldest competitive sports in Tibet. A form of folk sport, wrestling style is a popular sport in Tibet. It is a common sight at fairs and local holiday celebrations in many places in Tibet. This physical activity includes challenging of each other. It has a long history and tradition.

Wrestling earlier was classified as military training and combat skill during the king Songtsam Gambo period. Before the arrival of the cold weapons, wrestling had been used as a resort to resolve conflicts and confrontations with hostile tribes. It is making it an important form of ‘battleground fight’.

This is one of the Tibetan sports which is more like a game. It is popular for not being competitive but only for entertainment purposes. However, it can turn into a test of strength. In this sport, there are two competitors who hold on to a rope and then try to pull the other competitor over the middle line.

The person who pulled the other person across the line wins. This game is very popular and easy to play. Because all it requires is a rope and two people. It is a common sight as a great pastime activity during festivals in rural and nomadic areas.