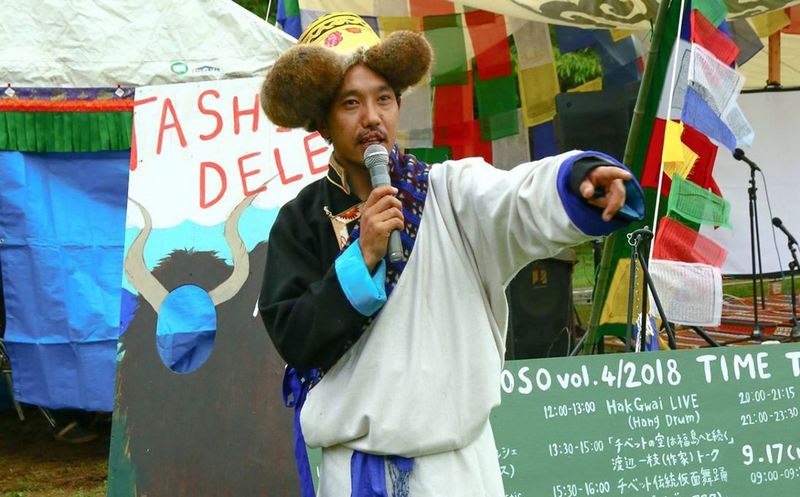 Nagano City, Japan — From September 14-16, the Kikisoso Tibet Festival will provide a forum for Tibetans throughout Japan to escape urban life and celebrate Tibetan culture with Japanese supporters. It is the fifth independently organized festival by the couple Genyen Tenzin and Shoko Yanagida. For two nights, festival participants will sleep in tents in the outdoor venue, enjoying the Nagano environment reminiscent of Dharamsala and experiencing Buddhist teachings and cultural exhibitions.

This year, the first evening of the festival opens with Tibetan opera, dance circle, and mask dance by Kharag Penpa from South Korea. He will then collaborate with Tenzin Kunsang, a Nagano-based musician trained at TIPA, for a live performance including the step dance Dramnyen Shabdro. After, Izumi Hoshi, a professor of Tibetan Studies at Tokyo University of Foreign Studies, will entertain with Tibetan ghost stories. The night concludes with a documentary film screening.

The second day begins with a lecture by Yasushi Ogawa about the life of Tibetan students at Men-Tsee-Khang in Dharamsala. Ogawa Amchi, who studied extensively in Dharamsala, is the only Japanese physician of Tibetan medicine in Japan. He has a counseling center in Nagano where he practices an unconventional, holistic approach to wellness. His lecture will be followed by a Tibetan circle dance, a lecture by Ichie Watanabe about the impact of economic globalization on traditional pastoral societies, and a live guitar performance by Uchida Bob, an anti-nuclear peace activist. After, there will be a live performance by Tenzin Choegyal, an Australia-based singer-songwriter who frequently visits Japan and collaborates with Japanese performers of the Indian flute (bansuri) and drums (tabla). His performance coincides with a live calligraphy rendering by Kunchok Tsultrim. The evening concludes with fusion Tibetan/Bollywood dance party for everyone to participate in.

The final day begins with a meditation practice by Kunchok Shitar, professor of Tibetan Buddhism at Potala College in Tokyo and longtime Japanese resident. After is a live performance by the Kikisoso Band; Genyen, the festival organizer, is also a member of the band. In an act of solidarity common in Japan, festival goers will collectively clean up the Komoro Eco-Village. The tents and mattresses, donated by a traveler to Tibet who manages the Nagano branch of the camping company Captain Stag, will be returned. The festival concludes with a ngonpa mask dance, traditionally the opening to Ache Lhamo opera but here adapted as a ritual of prosperity and completion. Throughout the festival are several workshops on manga, traditional Tibetan clothes, calligraphy, and making felt yaks.

In a recent interview, Genyen outlined three goals of the festival. First, he hopes to entice Tibetans out of Tokyo, where urban pressures and modern necessities dilute Tibetan culture and political striving for autonomy, and into the Tibetesque mountains of Nagano. If enough Tibetans moved into the foothills around Matsumoto, for example, the concentrated population and rustic pace of life could better facilitate cultural preservation. Tokyo has several Tibetan institutions, including the Potala College for Tibetan Buddhism, the CTA Tibet Office, and Tibet Cultural Center, along with a Tibetan restaurant, monthly Tibetan language class for children, and various Tibetan cultural workshops. While Nagano lacks these resources, it has a landscape and mood evocative of Manali and some local villages like Oshika famous for rural kabuki theater and full of ex-Tokyoites seeking a more cultured and laid-back way of life.

Second, Genyen does not tightly cling to the notion that Tibetan culture must be preserved by Tibetans alone, that cultural authenticity adheres in the ethnic agent like intellectual property rights adhere to the creator. “Think about Tibetan culture as money. You want to put your money in different bank accounts to guarantee its safety. If you dump it all in one account, you could lose it.” Extending his metaphor, he considers the festival a cultural deposit in the Japanese people. By cultivating deeper knowledge about Tibetan cultural forms, philosophy, and religious teachings among Japanese supporters, he universalizes what it means to be Tibetan and creates new avenues for cultural preservation.

Last, the festival is not overtly political. It bypasses the politicization of Tibetan support that pits Japanese rightwing groups and conservatives with nationalist, anti-China undertones against left-leaning and moderate supporters who support human rights and are more likely to be backpacking through Dharamsala. Of course, the natural setting and emphasis on cultural experience likely attracts more progressive Japanese supporters. But all are welcome, and the organizers have decided against hanging a Tibetan national flag as a gesture towards inclusivity. This not only includes Japanese supporters from across the political spectrum but also Tibetans from Tibet, who otherwise skip public celebrations out of a security concern for their families under Chinese rule. It also includes the over 650,000 Chinese living in Japan.

Last year, for the first time a Chinese university student came with her Japanese friends. Genyen described how she did not announce that she was Chinese during self-introductions but, that night during the bonfire, he found out she was Chinese and approached her with words of encouragement. She told Genyen that she was afraid that the festival goers would judge her or even hate her based on her nationality. But when she realized that the mood of the festival is socially inclusive and emotionally healing, she broke down in tears of joy.

Before the first Kikisoso Tibet Festival, five years ago, Genyen had a nightmare that only four people made the journey to Nagano. In distress, he confided in his Japanese friend. That night, she too dreamt about the festival, only this time there were hundreds of people: Tibetans from Tibet, Indian settlements, and around the world, backed by Japanese, Chinese, and Euro-Americans. Her dream gave solace to Genyen, and the first four festivals, through the ups and downs of blue skies and pounding rain, have been joyful and restorative events. With each successive festival, her dream comes closer to realization.

Biography of Stephen Christopher: JSPS Postdoctoral fellow at Kyoto University. He completed his PhD in anthropology from Syracuse University in 2018.

Biography of Hiromi Ikeda: Independent researcher and editor for a monthly magazine. She first visited Dharamsala 15 years ago and is a longtime supporter of the Tibetan community in Japan.