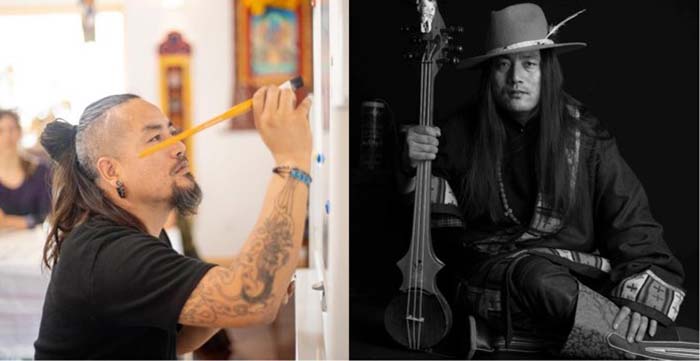 Dharamshala, India — An exclusive interview with tattoo artist and musician Tamding Tsetan. He shares with TPI his strong passion for art and the meaning behind it, as well as how he became an artist and musician. Tamding says, "Music has always connected me to my culture, and my lyrics are related to the fight for Tibetan freedom".

Born into a nomadic life in the remote Tibetan village of Windu, Amdo, eastern Tibet. He was drawn to music and art from an early age. In his free time, he would build clay sculptures and carve musical instruments out of bamboo.

He made the decision to flee Tibet at the age of 19. Throughout his tumultuous journey from Tibet to India and eventually to the United States, he maintained his love for art and Tibetan culture. He now lives in Vancouver (WA), USA, where he runs a famous tattoo parlor. As a musician, he takes to the streets every few months to perform music and advocate for Tibetan freedom.

TPI: Please tell us about your life in Tibet and the challenges you faced during your eventual escape to India.

Interviewee: I was born out of wedlock. In those days, people in the village did not know much about contraceptive education, and having a child out of wedlock was not a big deal. However, when my mother married my stepfather, my stepfather did not accept me and argued with my mother, so my grandfather took me to his house. Later, my mother had another child with my stepfather. This was also when China implemented the one-child policy and because of this she had to either get a hysterectomy or get a Copper IUD fitted. Since the latter was cheaper, she had it done, but the conditions were unsanitary and she got infected and became very sick. By the time my uncles found out, it was too late and no one could save her.

I was sent to live with my uncle, while my brother was sent to live with my mother's twin sister. My brother developed a disease that left him disabled in both legs and he eventually passed away too. People in the village would look down on me, they would call me a fool, and I would get beaten by my grandfather. It made me feel like anything I did was wrong; that's why I stopped talking for many years

I was 19 years old when I decided to flee my village. When I set out from Lhasa, there were 49 people with me. When we escaped from Tibet, no one had a map. We just had to keep going over mountains and hills. At one point during the journey, we found out that Chinese soldiers would arrest us on the spot, so we had to change our route. A journey that would have taken a week took us almost 43 days. The Chinese soldiers are not very active in the winter, that's why we were traveling at that time of the year. By the time I arrived in Nepal, my skin was cracked. These scars are still on me today.

At the refugee center, we were asked to choose a school. There, I chose the Tibetan Transit School (TTS) for those over 18. Children under 18 would go to the Tibetan Children's Village (TCV) or they could also choose to study at the monastery.

TPI: How did you become interested in tattoo design and music?

Tamding: I fell in love with music the first time I heard it. I remember one day in my village, on New Year's Day, I heard the sound of a mandolin. There, the music was only played during the festivals. They would bring a large radio to the town square, and that is how I first heard the music. Once, I found a guitar that had been thrown away with its neck broken. My grandfather was a wood carver, so he helped me turn it into a mandolin neck. Its strings were broken, so I used a motorcycle brake cable. Slowly, I learned how to play that two-string mandolin.

As for tattoos, when I came to TTS I saw a Tibetan man creating tattoos by slowly poking needles into skin. I was intrigued and decided to try it out for myself. The poking technique was too slow and not very hygienic, so I decided to make my own tattoo machine. Using a pen refill, a cassette tape, and the battery pack from a keyboard, I made my own tattoo machine with changeable needles. Even then, I never thought of it as a career.

Instead, I became a hairdresser. Indian barbers don't know how to cut Tibetan hair because it is very different. When I opened the salon, Tibetans were lining up to get their hair cut by me. My friend convinced me to start doing tattoos on the side, so at first I only made a few designs.

Once, when I was in Dharamshala, I saw an American woman with a tattoo of a Buddha on her back. I did not like the way our culture was portrayed. I realized that as a Tibetan, it was my responsibility to preserve our culture by sharing it appropriately. I met a tattoo artist from Seattle who taught me how to do a modern tattoo and a year later I bought a proper tattoo gun. I also design and sell T-shirts with Tibetan images and words on the street.

TPI: What is art to you? What do you strive to achieve from your artistic and musical performances?

Tamding: For me, no matter what kind of art you make - whether it is music, drawing or painting - it has to come purely from your heart. It is something that I use to fully express my thoughts and emotions. It comes completely from you, not someone just telling you what to do. It has the power to move people.

I designed my own logo and it took me 3 years to create it because I made it a point to depict everything that interested me. Even when I do a small piece, there is always a lot to explain. Different pieces have different meanings to people. I want my work to have a special meaning in people's hearts.

TPI: How does your art promote and reflect Tibetan culture and Tibetan struggle?

Tamding: Music has always kept me in touch with my culture. I have about five albums, but they don't have love songs. Whenever I write a song, I can't think of love, I can only think of the fight for freedom. My melodies and lyrics are all related to fight for freedom of Tibet.

I also studied Tibetan Thangka painting for two years. It is a very sacred art form. Before you start painting, you have to pray and purify. In the early days, these paintings would be used for worship, which is why the artist never signed the painting. However, I think that in a hundred years, due to the wave of technology, paintings will be quite rare. This is why it is so important for artists to sign their works. Only then will they know that it was done by a Tibetan. This is the only thing that will keep our culture and art alive. Equally important, artists can be fully compensated for their work.

On the other hand, tattooing is my job. When people see Tibetan-style artwork in my tattoos, they ask me questions and I explain the cultural meaning behind it. I also incorporate Tibetan script into my tattoos. I feel it is my responsibility to pass on everything I have learned and to preserve Tibetan language. Usually, I do a lot of free tattoos for Tibetans, especially when they ask me to do something related to Tibet. However, I have two rules, I don't do tattoos of Buddha statues and I don't tattoo monks. In my opinion, tattooing a Buddha is like selling him out. I also believe that monks are very clean and pure, that's why I refuse to create tattoos for them.

Tamding: I have said this to the younger Tibetan generation in our language, but in English it roughly translates to "keep what you love with you forever. I believe that once you love something and are passionate about it, you should learn it and always keep it with you because you may never know when it will be useful. That is what I do with art - I always keep it with me.