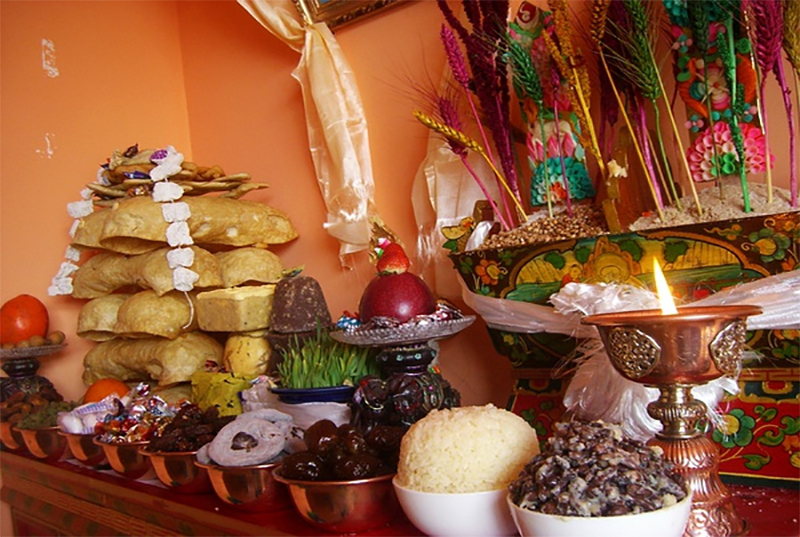 Mr. Lobsang Dorjee, a Tibetan Filmmaker who is the director and storywriter of the film, is the proprietor of Lodor Productions. He has successfully made a Tibetan film "Gyurwa," meaning "Change," which became quite popular among Tibetans and people living in the Himalaya region. The Gyurwa received overwhelming acknowledgement and applause from the Central Tibetan Administration (CTA) based in Dharamsala, India.  He has also produced several song albums under the banner of his production company.

Mr. Lobsang Dorjee, while introducing the theme of the film said, "the aim of the film is to create awareness about Losar.  Although we celebrate the festival but many of us, especially the younger generations, do not know the history, significance, purpose, and ways of proper celebration."  He further said that though the film has a socio-cultural objective, but it aspires to be of high entertainment value as well.

Mr. Dorjee, the Chief Guest of the ceremony, released the script of the film and presented scarves to the cast and crew members of the film. He lauded the initiative of Mr. Lobsang Dorjee, and addressed the gathering about the need to create awareness and promote Tibetan festivals through such creative and effective mediums, especially for the younger generations in this fast-track competitive period of globalization.

The film is expected to release during the upcoming Tibetan New Year in February 2014.

Tibetans inside and outside Tibet have voluntarily not marked Losar festivals for the past few years as the celebration was deemed inappropriate while over a hundred Tibetans have self-immolated as a protest against the Chinese government.  It is imperative that Tibetans cancel the merriment of Losar celebrations, yet at the same time there is also a danger that younger generations of Tibetans will forget Losar, which is perhaps one of the most important signposts of their culture and identity.  Hence, the film hopes to create an awareness and experience of Losar amidst Tibetans' struggle for their homeland.

The Tibetan New Year, also known as Losar, is the most important festival in the Tibetan lunar calendar. It is celebrated over a period of 2 weeks and generally falls during the months of January and February in the Western calendar. Losar is enthusiastically celebrated by Tibetans and is marked by various ancient ceremonies that represent the struggle between good and evil, such as chanting and the passing of torches through the crowds.

The traditions of the New Year's festival begin during the last 2 days of the old year, a period called Gutor in the Tibetan language. The first day of Gutor is spent thoroughly cleaning the house and putting up decorations, especially auspicious items. On the second day of Gutor, certain special dishes are cooked in preparation for the celebrations which begin the following day. Religious ceremonies also are held on the second day. One visits the local monastery to worship and to deliver gifts—often food—to the monks. Tibetans also set off firecrackers and other fireworks on the second day of Gutor as a symbol of driving away any evil spirits that may be lurking about.

On New Year's Day itself, Tibetans rise early and proceed to the household shrine to pay homage to the gods in the form of offerings. These usually consist of animal and demon shapes made from a kind of dough called torma. In addition, it is on New Year's Day that family and friends exchange gifts, much like people do on Christmas Day. Loved ones also share a hearty meal together, which usually consists of cookies called kapse and a beverage called Chang, a close relative of beer, traditionally enjoyed to keep warm.

The Origin of Losar

Losar, the Tibetan word for New Year, is composed of 2 characters: Lo, which means "year"; and Sar, which means "new." The celebration of Losar can be traced back to Tibet's pre-Buddhist period, when Tibetans were followers of the Bon religion and held a spiritual ceremony every winter. The traditional Bon ceremony is said to have coincided with the farmers' festival, or Harvest Festival. Upon Buddhism's arrival in Tibet, the older "heathen" ceremony of Bon was simply incorporated to become the Buddhist Losar festival.

In Tibetan-Buddhist monasteries, the celebrations for Losar begin on the 29th day of the 12th month. That is the day before Losar's Eve. On that day, monasteries host special rituals in preparation for the Losar celebrations.

The last day of the year is, as earlier indicated, a time to clean and prepare for the approaching New Year. In the monasteries it is a day of preparations. The finest decorations are put up and elaborate offerings are made called "Lama Losar". In the early dawn of this day, the monks of Namgyal Monastery offer a 'sacrificial cake' (Tibetan: torma) on top of the main temple (Potala in Tibet) to the supreme hierarchy of Dharma protectors, the glorious goddess Palden Lhamo. Led by His Holiness the Dalai Lama, the abbots of three great monasteries, lamas, reincarnated monks or tulku, government officials, and dignitaries join the ceremony and offer their contemplative prayers, while the monks of Namgyal Monastery recite the invocation of Palden Lhamo. Afterwards, all assemble in the hall called Excellence of Samsara and Nirvana for a formal greeting ceremony.

In order to wish His Holiness the Dalai Lama good luck for the coming year, consecrated 'sacred pills' (Tibetan: ril bu) made out of roasted barley dough are offered to him by the representatives of the three great monasteries, the two Tantric Colleges, etc. Then entertainers (garma) perform a dance of good wishes. Two senior monks stage a debate on Buddhist philosophy, and conclude their debate with an auspicious recitation composed especially for the event, in which the whole spectrum of Buddhist teaching is briefly reviewed. A request is made to His Holiness the Dalai Lama and to all holders of the doctrine to remain for a long time amongst beings in Samsara (Sanskrit) in order to serve them through their enlightened activities.

The second day of Losar is known as King's Losar (gyal-po lo-sar) because officially the day is reserved for a secular gathering in the hall of Excellence of Samsara and Nirvana. His Holiness and government agencies exchange greetings with both monastic and lay dignitaries, such as representatives of China, India, Bhutan, Nepal, Mongolia and other foreign visitors. From the third day onwards, the people and monks begin to celebrate and enjoy the festive season.