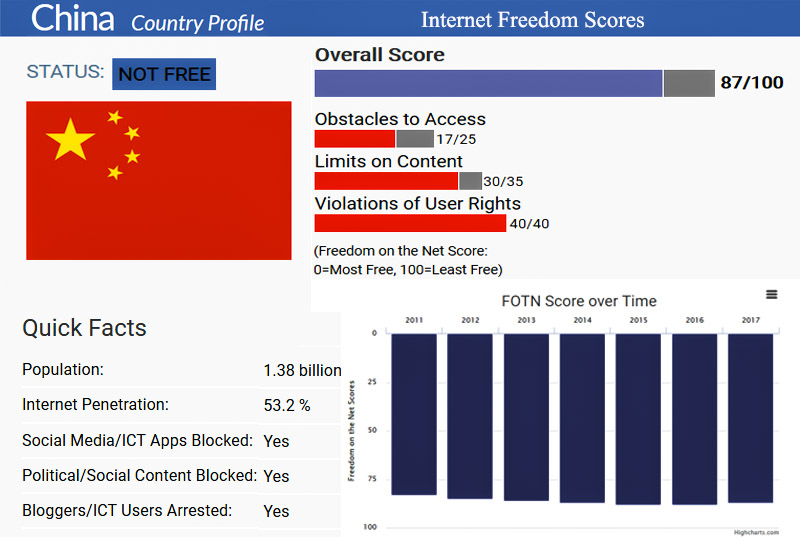 The report included a comparative study of the state of internet freedom in 65 countries. The countries were ranked on the basis of a score they received on the following parameters: obstacles to access, limits on content, and violations of user rights.

A higher score out of hundred indicated greater restrictions and violations of internet freedom. China scored an 87, one point lower to their last years score of 88.

Although China has about 733 million active internet users, one of the highest numbers in the world, the accessibility to the internet just isn't there mainly because of poor infrastructure and a telecommunications industry which is predominantly state owned.

A cyber-security law passed in November 2016, strengthened requirements for networks operators to register Chinese users under their real identities and store their information with the Chinese government. The introduction of new regulations increased pressure on companies to verify users' identities and restricted banned content and services.

There also have been instances where the government has shut down entire communication systems in response to certain events. For example, following a knife attack that resulted in eight deaths in February 2017, networks in Pishan County of Xinjiang or East Turkestan were cut off. There were reports of a similar blackout in a place of Karze County, eastern Tibet, following a self-immolation in protest of the CCP repressive rule.

In October 2017, China reportedly detained seven Tibetans, charging them with distributing videos about self-immolation on WeChat. The Chinese messaging app censorship is also increasingly sophisticated. The company no longer informs users when content has been censored.

The report highlighted the extensive manipulation of online content by China. The CCP employs hundreds of thousands of people to monitor, censor and manipulate online content. Topics like critiques of the government, its policies, China's human rights record, discussions on democracy or politics are suppressed and reprimanded. This has led to a sharp decline in digital activism.

Sentences range from five days to 11 years in jail for talking ill about the regime and advocating democracy online.

The Paris world media watch-dog "Reporters Without Borders" (RSF) also ranked China (include Tibet) 176 out of the 180 countries on its Press Freedom Index 2017. "In 2017, China continues to be on RSF's list of "enemies of the Internet" while President Xi is still on RSF's list of "press freedom predators." China is nowadays ranked 176th out of 180 countries in RSF's World Press Freedom Index," RSF added.