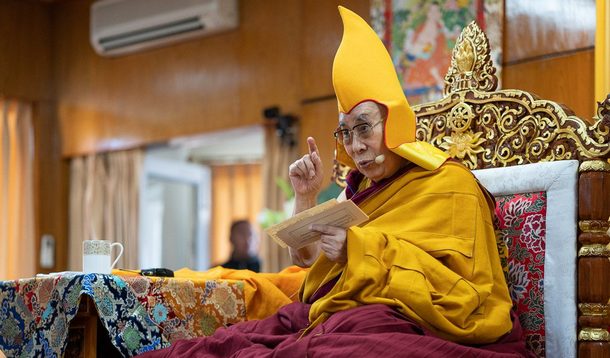 His Holiness the Dalai Lama during his teaching for Mongolians at his residence in Dharamsala, HP, India on February 28, 2019. Photo by Tenzin Choejor

Dharamshala, India — The spiritual leader of Tibet, His Holiness the Dalai Lama delivered a special message to the 11th General Assembly of the Asian Buddhist Conference for Peace, held in Mongolia, June 21, 2019.

He said he has a firm and deep-rooted respect for all the religious traditions in the world yet the way to overcome the shortcomings and faults of the misconception of reality.

The conference that began today will be held for 4 days from 21-24 June 2019 which will bring together efforts of Buddhists in support of consolidating universal peace, harmony, and cooperation among the Asian countries and its people.

His Holiness first paid his humble homage to Lord Gautama through a recitation of the verse written by a great master Nagar Juna which states that the followers of Buddha dharma should not accept the teaching of Buddha simply out of faith.

But rather examine the teaching with logic and reason because adversity such as suffering results from ignorance which arises from a distorted view of reality creating a misconception of reality which must be countered with a correct view. Doing this will help us diminish our destructive emotions such as attachment and hatred also a product of ignorance.

His Holiness greeted the participants and members of the conference and then spoke on the misconception of reality which His Holiness asserted can be eradicated only through the study of Buddha’s teaching.

The Nobel Peace Laureate maintained that he has a firm and deep-rooted respect for all the religious traditions in the world yet the way to overcome the shortcomings and faults of the misconception of reality is to first understand the interdependent nature of things which is present in the teaching of Buddha.

“The misconception of reality is unstable by nature while the correct view is based on logic and reason,” said His Holiness the Dalai Lama.

The Tibetan leader considers the writings of Nagarjuna and his disciples extremely important in studying the teaching of Buddha as it reveals the theory of dependent arising through logical reasoning.

The spiritual leader of Tibet, in fact, asserted that all Tibetan Buddhist traditions explain the concept of emptiness based on the writings of Nagarjuna and his disciples.

His Holiness further talked about the treatises written by an illustrious master like Je Tsongkhapa such as ‘Ocean of Reasoning- a great commentary on the fundamental verses of wisdom on the Middle way.’ The essence of Excellent Explanation -a treatise differentiating the interpretable and definite meanings of Sutras’, etc. and emphasised to study these treatises.

His Holiness the Dalai Lama remarked that the great nation of Mongolia was already familiar with the Sakya tradition of Tibetan Buddhism which was first brought into the nation during the time of Dragon Choegyal Phakpa following which during the period of the third Dalai Lama Sonam Gyatso, the tradition of Je Tsongkhapa spread widely in the country.

His Holiness also testified that the recent years saw a number of accomplished Mongolian scholars like Master Palden Choje who made an impactful contribution to the Buddha dharma.

His Holiness’s offered his best wishes and concluded with the prayer calling for everlasting Dharma.