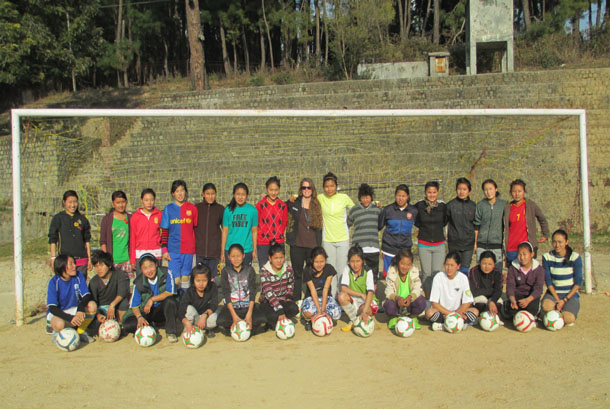 Dharamshala: Two weeks after seeing her brother beaten by police for attempting to cross the Nepalese border, Lhamo Kyi scored the first goal in the history of Tibetan women's football.

Eighteen-year-old Lhamo is now captain of Tibet's first women's football team. Her brother, 33-year-old Tsetan Dorjee, is in a Nepalese prison, where he has been sentenced to remain for five years, five months and five days.

Sitting on a grassy bank in the afternoon sunshine, which provided some welcome respite from the January chill, she explained to me how she, her brother and mother, 53-year-old Dhompo Kyi, were detained at Sonauli, half way along India's border with Nepal, for not having 'refugee cards', after the family had marched 20 miles (33 kilometres) a day from the Dalai Lama's Main Temple in McLeod Ganj, with the intention of continuing all the way to Tibet, between March and May last year.

"They beat my brother in front of our eyes and my mum was about to be sick," she said.

"It was 11pm and no one else was there. It was raining very hard. Nepalese police don't do anything to us during the daytime. They do everything at night when nobody can see what they're doing."

When they were released the three returned to Gorakhpur, India, where Lhamo waited for three days in a hotel room for her mother to recover. Then one morning the mother and daughter were awakened by the news that Tsetan Dorjee had disappeared. She said: "My mother was just shocked. She shouted: "where is my son?" She was crying and said she wanted to go and find him. I didn't know what was happening.

"One or two days later we had a call from a friend in Delhi who said my brother had called him and was going through Nepal alone. He had already walked 43 miles (70 kilometres)."

Shortly after, her brother was arrested. Lhamo and her mother have not seen him since. Upon returning to McLeod Ganj, Lhamo's mother sat outside the Dalai Lama's Main Temple where she fasted for 48 hours.

Cassie, 31, from New Jersey, told me how, during the two month peace march, when the family sought shelter each night in temples along the roadside, Lhamo would text her every night.

"It was very emotional for me, never mind for her," she said.

"I saw her the day after she returned and our first match was scheduled a week later, on May 25. I told her that if she wanted to join our team she could be captain.

"She played and she scored that goal. The first in the history of Tibetan women's football. That just shows how courageous this young woman is. She's amazing."

Lhamo, who left her home in Amdho, northeastern Tibet, to make the perilous trek across the high Himalayas to India aged eight, said: "The happiest moments of my life are when I'm playing football.

"I get courage through playing football. We have the first Tibetan women's team and when we play we speak out to the audience saying we girls can do anything if we work hard."

Lhamo is not alone in enjoying the three week training camp. I watched the team being put through their paces, shouting and laughing as they played their first game of the year on the school's dusty pitch whilst the snow-covered Dhauladhar mountains loomed large beyond.

Cassie, who taught history and football in American high schools for five years, told me how she came up with the idea of forming a Tibetan women's team in 2010, after visiting a photography exhibition on Tibetan football by the Tibetan National Sports Association (TNSA) in McLeod Ganj. 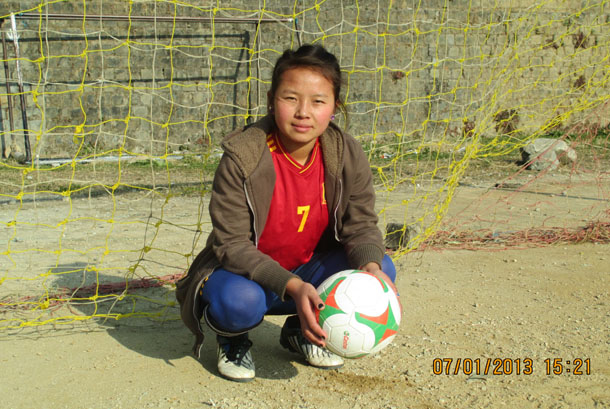 She said: “The first thing I noticed was that I was the only female in the room. I then noticed that in the photos there were no women playing sport at all and I began to wonder if they weren’t getting the opportunities. I said: ‘that’s ridiculous; I’m going to do something about it.’

“Then I went home, back to my teaching job and forgot about it.

“About a month later I got an email from the executive secretary saying: ‘If you’re serious, we’re serious.’ I spent the next few months preparing and fundraising in America, and arrived back a year later.”

For her first team, Cassie contacted PE teachers at eight TCV schools, plus Sambhota Tibetan School in Chauntra, Himachal Pradesh, asking for three of their most enthusiastic female footballers. This year however, she visited all but one of the schools herself on a mission to select the best. Despite having been picked for their enthusiasm, last year’s team managed a respectable 2-0 defeat against Harayana state’s girl’s team – described as one of the best in India by Cassie who added that her team was “happier than the winners.”

She said: “We have two main aims at the camp: to empower the girls, and to get a team ready to compete against the top teams in India.

“For me it’s all about fun. Just having fun and never giving up. If there’s no fun, there’s no point, and I think they play better when they’re having fun.”

Each day the girls awaken for running or yoga at 7.30am, and spend the morning in the classroom learning about empowerment, leadership skills and football techniques before spending the afternoon on the pitch trying out their new found skills.

Tsering Lhamo, 16, from Dehradun, has been playing football for five years. She said: “Football is an international game. It’s one of the most popular games in the world, so if we can play in a Tibetan national women’s team, we can share our feelings about our country throughout the world.”

Lhamo Choekyi, 16, who lives in Dharamshala, added:  “I’ve learned so much about playing football from Cassie and the other staff. This game is very important for Tibetan women because it makes us proud. Some boys say that Tibetan girls don’t know how to play football. We want to show all the boys that we can play football and that we can do anything they can do.”

“In many countries people have freedom and many opportunities to represent their country,” she said.

“We have no freedom in Tibet and here we are refugees. Fortunately Cassie has come and my dreams have come true.”

“The bond that forms during this camp is amazing,” added Cassie.

“It’s just like they are all my daughters. All these girls have a story and it’s magical to hear them unravel.

“And this year we’ve got the very best.”

To learn more about the Tibet Women's Soccer Project, or to make a donation, visit www.friends-of-tibet.org/projects/tibet-womens-soccer.