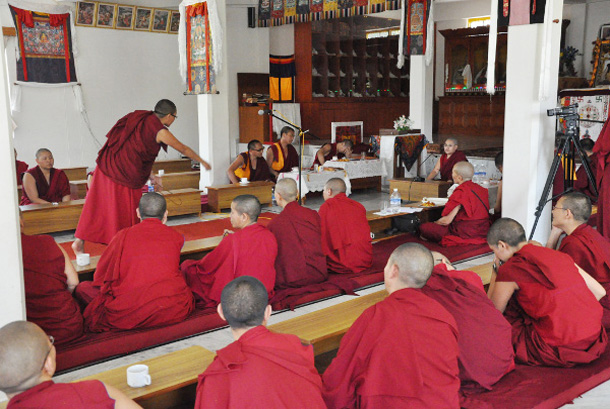 Dharamshala: - After years of deliberation the Department of Religion and Culture of the Central Tibetan Administration in Dharamsala finally took the decision to grant the Geshema degree to Buddhist nuns.

The first ever Geshema dialetic debate is currently underway at Jamyang Choeling nunnery, located about 10 kms from Dharamshala.

27 Buddhist nuns from various nunneries across India are participating in the Buddhist philosophy debate.

The decision was also pushed by his Holiness the Dalai Lama of Tibet, who strongly advocated for the Geshema degrees which are the equivalent of a PhD in Buddhist Philosophy. In the past these degrees were only open to Tibetan monks.

Geshe Ladangpa Yeshe Lhundup from the Loseling Monastery says that the system of debate is similar with the monks except for a few minor differences.

With this degree nuns are given the opportunity to appear for the very stringent doctorate examinations after graduating from a rigorous 19-year program of philosophical studies. When successful they will be able to teach Buddhist philosophy in nunneries and schools.

From 20th May till 3th June the first Geshema dialectic debate will be held at Jamyang Choeling nunnery situated about 10 kilometers from Dharamsala. Nuns from all over India and Nepal will participate.

The historic decision to award Geshema degrees to qualified nuns was reached last year after a two-day meeting between high lamas, representative of nuns and members of the Tibetan Nun Project.

It was decided during the meeting that nuns who passes the final examination after completing a total of 21 years of Buddhist studies will be conferred a Geshema degree.

Accordint to the Department of Religion and Culture, the debating session is 30 minutes, 15 minutes for questions and 15 minutes for answering. The debates are fully monitored and controlled by the Nun Examination Board, comprising of members from Gaden Choeling, Dolma Choeling, Jangchup Choeling, Kachoe Gakyil, the Tibetan Nun's project and the Department of Religion. Six Geshes from the three great monasteries are also assessing the performance of the nuns.