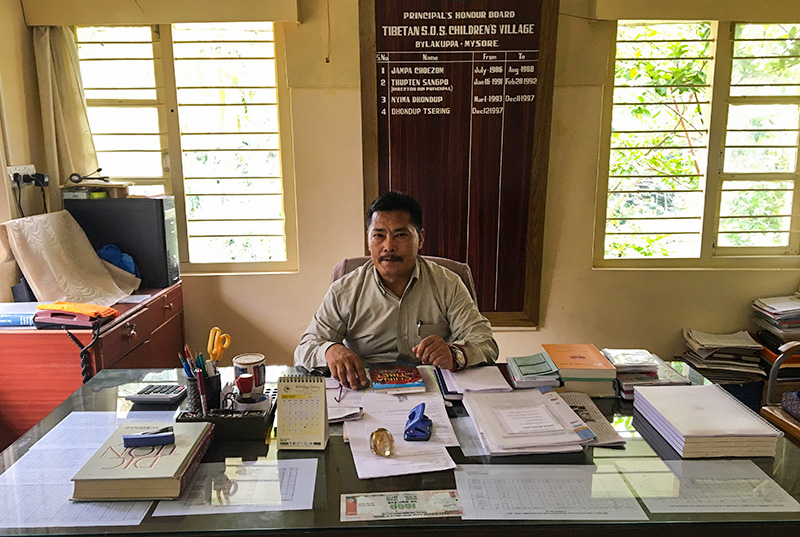 Bylakuppe, Karnataka State, South India — Dhondup Tsering is the principal of the Tibetan Children's Village school in Bylakuppe He has been working for TCV network for 25 years and spoke with The Tibet Post about his views on education and the preservation of Tibetan identity among young people.

TCV School Bylakuppe was built in 1980 under the grace of His Holiness the Dalai Lama and his elder sister Tsering Dolma. Initially the school housed only 90 students, all from different parts of India. Class room facilities were poor, and likewise elder students were provided classrooms in four homes and younger students had to be sent to Bylakuppe central Tibetan day school. In 1984, fortunately, grades up to class six was established and the classroom building was in progress too. In between 1987 to 1988 TCV was affiliated with Central Board of Secondary Education and the first batch graduated class ten in 1992 with outstanding results. Gradually TCV was granted as a pre-college university in 1993 -1994 because of its outstanding performance in the commerce program that lasted 20 years (1993-2014).

Initially students were from within India, but gradually many children came from Tibet and those children who had their relatives in monasteries were in TCV Bylakuppe. Currently most students are from Tibet and they are very hard working and creative, responsible and thoughtful kids, said principal.

In 2010, with the principal's consent, they decided to shift the commerce program to Dharamshala and shift science to Bylakuppe. In 2011, CBSE granted permission and by 2013, the first science batch graduated with 100% pass and distinct and outstanding results. Followed by years to years until now in 2017, when again 100% of the students passed, succeeding amazingly.

Problems faced by TCV:
Dhondup said, "Though there wasn't any state, society or community born affluently at first time, all of us had gone through some amount of difficulties, hard situation and even we had reached at a point where our patience fails to hold on and move forward, but then our conscience give us strength to stand up and face the realities no matter how hard it seems, likewise TCV Bylakuppe had gone through immense difficulties.

"The major problem TCV Bylakuppe faced throughout time was water issues; first of all we are having scarcity of drinking water and for that we try our best to manage the ground water, because it is the source we have to hold our hope. But unfortunately the water we hold our hope on is degrading at a fast pace, not because TCV uses so much but it is the farmers, who plant ginger and uses a lot of water who are creating huge problems with water resource, health, and hygiene of TCV students and the whole settlement people. Also, because of the pesticides they use to grow ginger it is scientifically proven to be a cause for incurable diseases in the future, hence I am so worried about students' health and hygiene and trying to negotiate with them."

He said, "Another big problem we face is the discipline of the school, it is so obvious that almost all the parents love their children and want the best for their children, but somehow parents fail to train them and end up ruining their lives by providing advanced gadgets rather than sharpening the brain with advanced knowledge. Those students who face problems with school discipline fail to pursue their dreams and end up being wanderers, which is not our prime purpose of educating. Hence, parents are the root and role model to them and should set good examples. To some extent, TCV is reaching their goal and completing its mission, because most of our children are thoughtful and grateful as they are taught."

He said, "The most pathetic way of kids these days is that they ague back and say, 'you are not allowed to beat and yelled at me or else I will cut your salary.' They never try differentiate which is right and which is good for them. Instead their mind is blowing away by the fancy things and punk looks, they think arguing with teachers and being rude at them makes him/her a legend, we are so sorry for having such a pity mind set in those kids, but we are never tired of it, we deal with our level best and make them a good person because it is our mission and our prime purpose".

Apart from academic activities, TCV provides a platform to grow in different ways, like life skills and moral values. Most importantly, students are privileged enough to learn and practice their own culture and religion, which has been strongly demolished by Chinese government since 1959. Students are equally provided with different the opportunities to learn, grow and shine in different ways.

The Principal's concern about the new generation is that students are merely pursuing their own interest, The gratitude and love toward the institution where they were graduated, and thoughts of returning to help their juncture are hardly found these days.

While some of them are selfish, many more of them are really heart touching. They completed all the degrees they ought to and are serving Tibetan communities in various places, as well as in international level too.

TCV is in fact a min-blowing NGO founded by Ama Jetsun Pema, the sister of His Holiness the Dalai Lama.

He concluded, "as long as we, the staff, are healthy and fate allows us, we will serve til death."