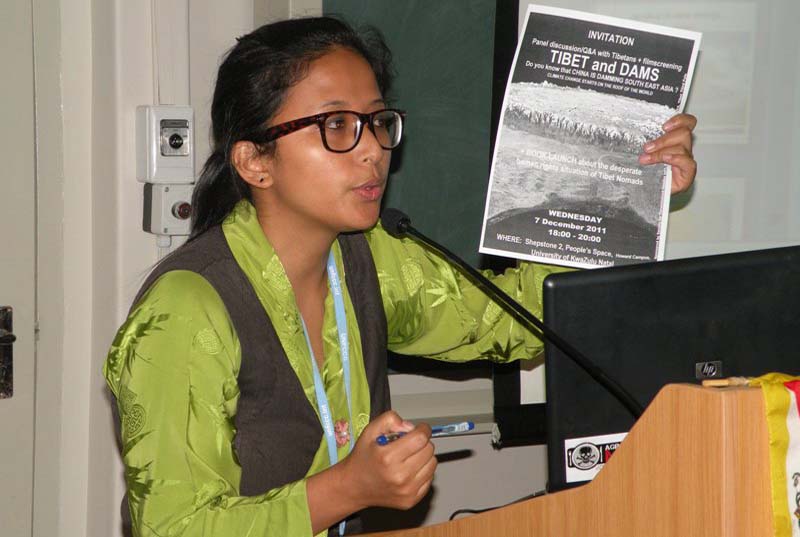 In this significant gathering that boasted of 11,810 delegates, 1409 NGOs and 86 Inter-governmental Organizations, the two delegates joined NGOs from 200 countries to advocate equitable and durable solutions to the world's growing climate change crisis by representing Tibet.

Tibet, termed by the scientists as the ‘Third Pole', owing to its storage of glacier ice and its status as a reservoir for the world's largest rivers which feed one billion people in 10 downstream countries in South East Asia, is now facing a rapid ecological disturbance.
China, despite the climate-change crisis, has begun constructing mega-dams and water diversion projects to capture and redirect water from India and South East Asia to its increasingly thirty provinces.

The forcible removal of all of Tibet's 2.25 million nomadic herders by China under the pretext of conservation has caused a human rights emergency. This crisis has cropped up despite the scientific evidence that prove that nomads have a positive role in promoting a balance in the ecosystem, diversity and resilience.

Addressing the attendees, Tenzin Woebum, Head of the Tibetan Delegation stated that despite the fact that it is a sovereign nation's moral responsibility to act not only in its self-interest but also in the interest of the people living beyond its borders, China's actions say otherwise.

"Tibet Third Pole senses the need to inform governments and fellow NGOs on the downward spiral that Tibet's environment is on owing to Chinese policies. It also senses the need to bring to notice, controversial policies such as coercive settlement of Tibetan nomads," she added.
"We are awed at parties steering clear of annoying China, thus making it a huge challenge for us, Tibet Third Pole delegates, to present the true side of Tibet's environmental crisis," stated Tenzin Dolma, Joint Secretary, Tibetan Women's Association.

"It is significant to have the Tibet voice heard in this magnanimous gathering of leaders and activists with vested interest. This is especially so when China is painting a different picture of Tibet," she concluded.

The delegates then spoke about Tibet Third Pole's ‘Demands for Tibet in the Age of Climate Change,' stating the 6 key demands as follows -
1. An immediate halt to all land uses that threaten the Tibetan Plateau's ecosystems and ecosystem services, especially the plateau's water resources;
2. An independent, international scientific assessment of the Tibetan Plateau's ecosystems, ecosystem services, & land-use policies;
3. An immediate halt to the removal of Tibetan nomads from the grasslands;
4. The use of social & ecological assessment tools & data to determine appropriate human & ecosystem adaptation and mitigation strategies on behalf of sustainable land uses and landscape-scale conservation;
5. Transparent, inclusive, & participatory trans-boundary resource management & decision-making mechanisms that include all local and regional stakeholders whose lives depend on these ecosystem services, especially Tibet's nomadic herders;
6. The creation of strategic conservation zones across the Tibetan Plateau as a way to enhance the health of ecosystem services & that involve and support the traditional livelihoods and sustainable land-use practices, both in Tibet and in downstream nations.

The screening of two Michael Berkley's films, ‘Meltdown in Tibet' and ‘Nomads to Nobody' was received well by the audiences, promising positive news for Tibet.

As the highlight of the whole campaign, the Tibetan Women's Association is launching its publication ‘Purging the Treasure House: Displacement and the Status of the Tibetan Nomad' in a public event, tomorrow, December 7.

Funded largely by TWA and partly by the Global Fund for Women, the presence of Tibet at the biggest meeting on climate was made possible by accreditation and letters of invitation accorded by Global Campaign for Climate Action and Oxfam in South Africa through International Tibet Network.