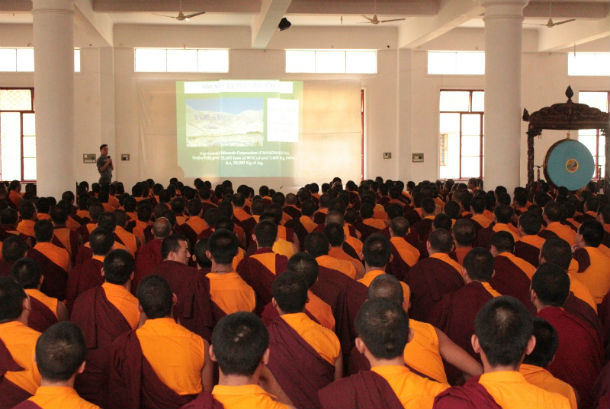 Bylakuppe, Mysore: - Around 600 monks gathered outside the courtyard of Sera Lachi Monastery on Tuesday, braving light shower and savage attacks of mosquitoes, to listen to a talk about the present environment and development issues concerning Tibet.

Many monks reacted in distress as they learned and saw pictures of melting glaciers, deteriorating permafrost, degrading grasslands, displacement of nomads and large-scale resource extraction in Tibet.

The talk is part of the ongoing initiative by the Environment and Development Desk (EDD) of Department of Information and International Relations (CTA) to raise awareness about the present environment and development issue inside Tibet among Tibetan communities in India. After successfully completing a similar program in Tibetan schools across India last year, the second leg of the project targets lay and monastic communities in different settlements in India.

The project aims to "educate our community about the importance of the Tibetan Plateau and the deteriorating environmental situation of Tibet in the past 5 decades" said Mr. Jigme Norbu who along with Mr. Tsering Dhundup are presently in the Tibetan settlement of Bylakuppe.

Earlier, they addressed large gathering of Tibetans from different camps in their respective community halls as well as around 1200 monks of Namdroling monastery, which is known for its famous ‘Golden Temple'. The awareness program is proving to be very useful especially for youngsters, who have limited knowledge about the environmental situation inside Tibet.

After attending to the talk, some monks who fled from Tibet to receive proper monastic education in India, also echoed similar concerns of environmental degradation due to climate change and China's failed policies in their hometown but were surprised to learn about the destruction occurring at such a large scale.

A monk from Namdroling monastery expressed, "the environmental crisis inside Tibet is the most urgent issue which needs to be addressed as soon as possible"

The team of EDD researchers will visit and organize similar awareness raising programs in south Indian Tibetan settlements of Hunsur, Kollegal and Mundgod in the coming weeks.