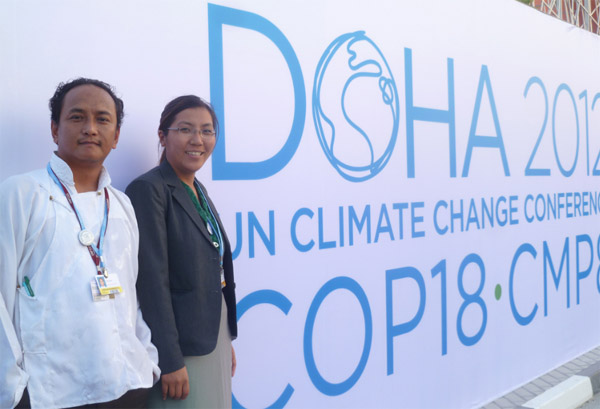 Dharamshala: - Two Tibetans from the exile Tibetan community arrived in Doha for a week-long campaign for Tibet and participation at the UN's 18th Conference on world Climate Change.

Tenzin Choedon, head of the Women's Environment and Development Desk at the Tibetan Women's Association, and Tenzin Norbu, head of the Environmental Desk of the Tibetan Department of Information and International Relations , currently are in Doha, Qatar to participate in the United Nations 18th Conference of the Parties (COP18), an initiative of the United Nation's Framework Convention on Climate Change (UNFCCC), occuring between November 26 and December 7.

The Tibetan representatives will be meeting with an estimated 17,000 delegates, 7,000 NGOs and 1,500 journalists to discuss equitable and sustainable solutions to the growing climate crisis. They will act as a voice for climate justice in Tibet, highlighting Tibets role as Asias water tower.

Through collaboration with downstream nations they plan to pressure China into signing the UN water sharing agreement and into becoming a member of the Mekong River commission. Such action would protect not only Tibet but the multitude of Asian nations that depend on the major rivers, all originating in Tibet, that sustain life in the region.

The representatives will also discuss more general climate change issues in Tibet, according to the India based Tibetan Women's Association.