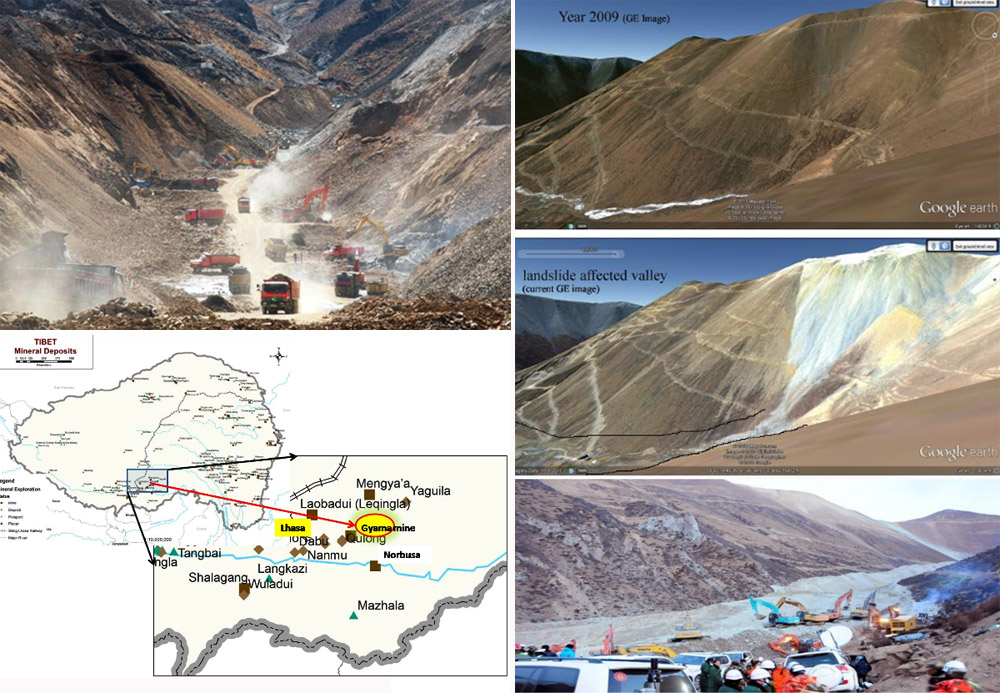 Dharamshala: - The environmental researchers of the Central Tibetan Administration (CTA) based in Dharamshala Wednesday said China's large-scale exploitation of mineral resources in Tibet caused the recent disaster that killed more than 80 Chinese miners.

'On Friday, 29 March 2013, Chinese state media reported that 83 miners including two Tibetans have been buried after a major landslide hit part of the Gyama (Ch:Jiama) Copper Polymetallic Mine at 6.00 AM local time. As of 4 April, 66 miners have been confirmed dead and 17 are reported missing, believed dead,' CTA environment desk said in an assessment report of the recent landslide event in the Gyama Valley, near Tibet's capital Lhasa.

"The workers were reportedly asleep in their tents when they were buried by a mass of mud, rocks and debris, three kilometres wide and 30 metres deep. The landslide occurred in the Pulang Valley in Siphug Village of Tashi Gang Town of Central Tibet," the report said.

The Tibetan administration said that "Tibet's rich mineral deposits have become a resource curse for the local residents and ecosystem. Since the late '60s, these mineral deposits have been exploited in various scales, mostly under poor environmental norms and regulations. As for the minerals extracted, copper, chromium, gold, lead, iron and zinc are the minerals of greatest interest to Chinese and other foreign miners operating in Tibet."

These are being mined to different extents at various locations throughout the Tibetan Plateau. The CTA report said "Now with a strong policy backing from Beijing designating mining in Tibet as one of Beijing's "Four Pillar" industries, Tibet's holy landscapes, lakes and the pristine rivers will face more destruction, pollution and most of all the local residents will have no option but to silently witness the ecocide of the Tibetan Plateau."

"In a show of concern, President Xi Jinping, Premier Li Keqiang and Vice Premier Zhang Gaoli have instructed officials to "spare no efforts" to rescue workers. This is indeed a very sad and unfortunate incident. However, Chinese government must also "spare no efforts" to figure out the real cause of this tragedy, through sincere and transparent investigation by putting aside political and social sensitivity of the issue," the reported added.

The Environment and Development Desk of CTA said it "suspects that this tragic incident could be a result of the aggressive expansion and large-scale exploitation of mineral in the Gyama Valley – a man-made phenomenon rather than merely a "natural disaster". Click here to read the full text of the report.

"The Gyama tragedy is a reminder that China, after six decades of geologising Tibet, is now able to exert maximum force on the land of Tibet and its minerals, and make its fortune. Ironically, this capacity to establish intensive extraction enclaves in Tibet comes too late to make much difference to China. The demands of the world's factory, in China, for raw materials is now so great that even the most intensive exploitation of Tibet would do little to reduce China's need to import minerals from all around the planet," said Gabriel Lafitte, an Australian public policy analyst who has worked with Tibetans for over 30 years, most recently as consultant to the Environment & Development Desk.

"Gyama Valley, just upstream of Lhasa, had seemed like the least forceful of China's big mines in Tibet. In fact Gyama's Vancouver-based owners, the state owned China Gold International, had invested a lot in corporate PR, sending reporters to Gyama to tell the world the mine is not only good for the economy but also for the environment, and for Tibetans. Feature stories in some of China's mainstream international media emphasised the good news story of this wonderful mine," Gabriel further added.