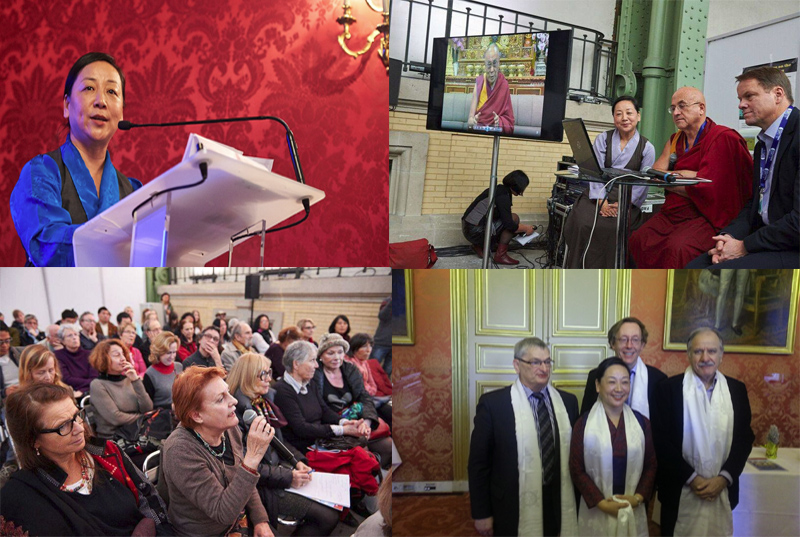 Paris, France — "Tibet is important to the world's environment concerns because it is considered as the 'Third Pole' for its glacial coverage after the two poles," said Ms Dicki Chhoyang, a Tibetan minister who lead the Central Tibetan Administration's (CTA) Climate Action for Tibet campaign at the sidelines of the COP21 climate conference.

Ms Chhoyang, Kalon or minister for Department of Information and International Relations (DIIR), Thursday (December 10) met with members of the French parliament at the French Senate. Ms Chhoyang is currently in Paris to lead the CTA's Climate Action for Tibet campaign at the sidelines of the COP21 climate conference in Paris.

The Presidents of the Tibet Group in the Senate and National Assembly, Senator Michel Raison, Deputy Jean Patrick Gille and Noel Mamere along with 18 other parliamentarians and their representatives, as well as the secretaries of the groups attended the meeting, according a CTA report.

Speaking during the session, Ms Chhoyang highlighted the purpose of her visit to Paris as to create awareness about the importance of Tibet's fragile ecosystem to the environmental issues facing the modern world, and to urge the parties to treat Tibet as such, beyond politics for the betterment of the entire humanity.

"Tibet is important to the world's environment concerns because it is considered as the 'Third Pole' for its glacial coverage after the two poles, 'Water Tower of Asia' for it serves as the sources of Asia's biggest rivers, and as the 'Rain-maker' for its huge part in regulating the monsoon in south Asia", Kalon said.

The meeting was arranged jointly by the Tibet Groups in the Senate and the National Assembly of French parliament.

Ven Matthieu Ricard, the renowned French Buddhist scholar and environmentalist, writer and photographer was also present during the breakfast meeting and gave his perspective on the environmental issues with regard to the Tibetan plateau.

The Tibetan minister gave an overview of the environmental problems faced in Tibet and the need for the international community to heed to the calls of the Tibetan people to safeguard the future of this planet, that if ignored would have far-reaching consequences.

Since her arrival, Ms Chhoyang was interviewed by several French and international medias such as Radio France International (RFI), France Info (Radio France), COP21 Radio and RFI Chinese service. She is scheduled to leave for Brussels Saturday, after some meetings and couple of interviews.