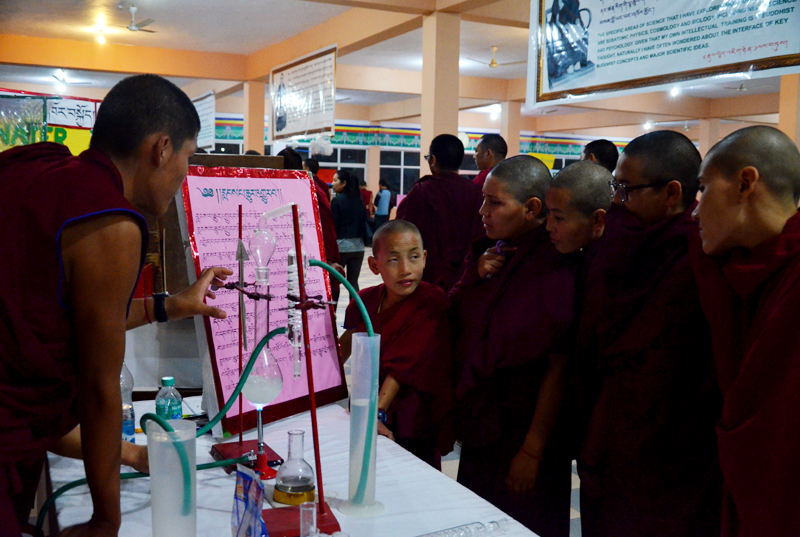 The three-week exhibition has displayed in two different platforms - on field with beautiful layout using plants, soil and other objects and the other in-door with crafty illustrations. Students say their exhibition "highlights the all important resource of water and the environmental danger it is facing."

The exhibition was organised by the students of the Sera Jey Secondary School. Individual monks took turns explaining to him the displays outside in the garden and inside the school hall.

The exhibition consisted of a series of displays, similar to Tibetan thangka paintings, illustrating aspects of climate change under headings such as How do Earth Systems Work? Earth's Energy Balance, Weather or Climate, the Carbon Cycle and What Can We Do? Each display included explanations in Tibetan and English.

Several senior monks and Director of The Library of Tibetan Works& Archives, Geshe Lhakdor, escorted the Tibetan spiritual leader round the exhibition in which he took a close interest.

At the end His Holiness remarked that it's worth noting the place trees had in the Buddha's life. He was born under a tree, was enlightened under the bodhi tree and passed away between two sal trees. Also, the Buddha gave monks instructions not only about planting trees, but on continuing to care for those planted by others before them, particularly during the rainy season retreat.

His Holiness responded, saying, "What you have shown me is very good. You should know that Nalanda University wasn't just a place where people gathered to say prayers, but a centre for the study of the five sciences."

"Many learned people like Nagarjuna and his followers gathered there and it eventually became a centre for Buddhist studies. Now, Tibet is the only Buddhist country to have maintained the Nalanda tradition intact," His Holiness said.

"We don't have to know Sanskrit or Pali; we can access this tradition in our own language Tibetan because of the kindness of our ancestors who translated Indian Buddhist literature. I feel it's consistent with the spirit of the Nalanda tradition to have added modern science to the curriculum in our schools and monasteries," he said, adding: "Lay people and monastics should make the effort to raise the standard of education we provide, keeping in mind the need to care for both our external and internal environment."

The exhibition will remain open for general public till January. Over 20 exhibitors have set up their stalls displaying a wide range of objects. They said the past few days since opening have been incredibly positive and thousands of people, including monks and nuns visited the exhibition.