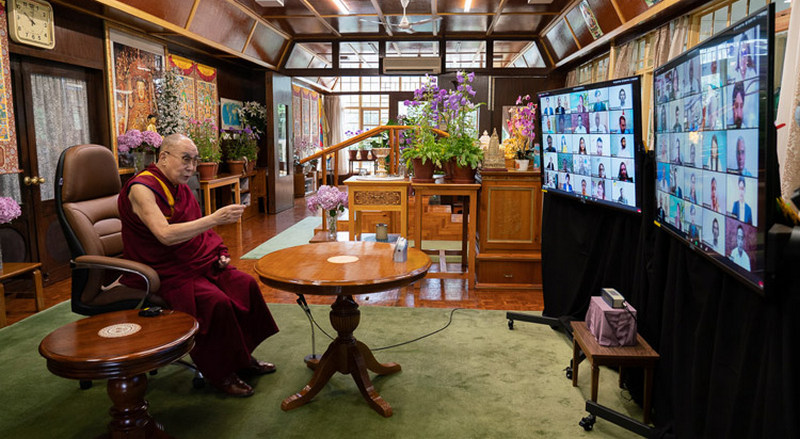 His Holiness the Dalai Lama speaking to Amity University students by video conference from his residence in Dharamsala, HP, India on June 26, 2020. Photo by Ven Tenzin Jamphel

Dharamshala, India — When outlining his main commitments, His Holiness the Dalai Lama said he feels a strong need to speak up for the protection of ecology of Tibet, not just for the benefit of the people of Tibet, but also on behalf of all those across Asia who depend on rivers that rise in Tibet for their water.

The ecology of Tibet has remained intact for centuries. From the great Emperors of Tibet to the institution of Dalai Lama, the rulers of the ancient Himalayan nation have consistently passed stringent decrees on the protection of the country's environment and wildlife, which were observed by the general Tibetan populace, according to the Tibet Nature Environmental Conservation.

His Holiness the Dalai Lama was speaking to Amity University students by video conference from his residence in Dharamsala, HP, India on June 26, 2020.

First of all, as a human being himself, he considers his seven billion companions to be the same in being human. Because we are social animals, he observes, we are dependent on others and they are dependent on us. To see other people in terms of ‘us’ and ‘them’ stokes conflict that can result in bloodshed and killing. Therefore, he is committed to promoting the oneness of humanity.

As a Buddhist, His Holiness feels a strong responsibility to encourage inter-religious harmony. He considers it unthinkable that anyone should fight or kill in the name of religion. He concedes that different spiritual traditions propound different and contrasting philosophical points of view. Many Indian traditions describe a self or atman, separate from the body and mind, that goes on from life to life.

The Buddha taught that the self is not something separate and independent. Rather, it is dependent on the body and mind. Despite such different views, all these traditions, Hindu, Buddhist, Christian, Muslim, and Jewish, convey a common message of love. On such a basis, religious harmony is possible. And of this India is a living example.

His Holiness declared that the Tibetan people place their trust in him and so historically he has a responsibility to help them. However, since 2001 he has retired and devolved his political responsibility to an elected leadership. He feels a strong need to speak up for the protection of Tibet’s ecology, not just for the benefit of the Tibetan people, but also on behalf of all those across Asia who depend on rivers that rise in Tibet for their water.

Of corresponding importance is that Tibetans have kept ancient Indian knowledge alive, not just in terms of prayer and ritual, but by means of rigorous study. Tibetans have memorized the classic texts, studied their meaning, word by word, and tested their understanding through debate.

His Holiness declared that since formally completing his own studies in 1959, he has continued to exert himself in practice. He has worked to increase his positive emotions and reduce those that are destructive. As a result, he says, he always has a smile on his face, a genuine, sincere smile, not an artificial one. This reflects, he said, that his mind is always at peace.

“It’s on such a basis that I am a messenger of ancient Indian thought,” he disclosed, “especially with regard to ‘ahimsa’ and ‘karuna’ — compassion and non-violence.”

The communist-totalitarian state of China began its military invasion of Tibet in 1949 from the east, reaching complete occupation of the country in 1959. Since that time, more than 1.2 million people, 20% of the nation's population of six million, have died as a direct result of China's invasion and occupation. In addition, over 99% of Tibet's six thousand religious monasteries, temples, and shrines, have been looted or decimated resulting in the destruction of hundreds of thousands of sacred Buddhist scriptures.