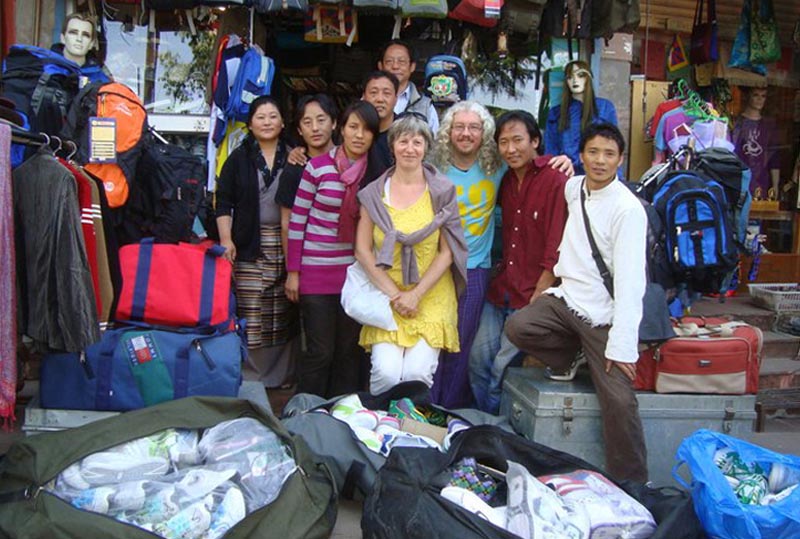 Brussels: - When Dennis Barbion and his wife Marijke Reynaert visited India for the second time in October 2008, they asked their Tibetan friends in Mc Leod Ganj (Dharamsala) how they could help them in the best way, or what they needed most. Each time the answer was "shoes!". As shoes are too expensive for them, the Belgian couple decided to set up a shoe project for the Tibetan refugees in Dharamsala. With all the money raised they could give a new pair of shoes to 80 Tibetans in October 2009.

Due to the poor conditions of the roads, the rocky paths and the need for ordinary people to do everything on foot, good quality shoes are necessary. Therefore, Dennis and Marijke decided to start a new fundraising for the purchase of good quality shoes in Mc Leod Ganj in Spring 2010.

In April 2011, the couple spent 3 weeks in Dharamsala. They have just finished the project and with the money they have collected during the last year, they were able to give a new pair of shoes to 426 people in total, a very big and unexpected success!

In the beginning of their stay in Mc Leod Ganj, Dennis and Marijke contacted the Tsawa Association and the Tibetan Women's Association. They presented their shoe project and asked the organizations to make a list of the most poor people who could definitely use but can never buy a good pair of shoes.

All the shoes were purchased on the spot in a Tibetan shoe shop in Mc Leod Ganj.

The reactions of the people and organizations who received shoes were most grateful. They all realize that the purchase of a new pair of good quality shoes is too difficult for them and that good shoes are really very necessary. Many had tears in their eyes and a big smile on their face when they received the shoes.

During their stay in Mc Leod Ganj, the Begian couple received many words of thanks and appreciation for their work for the Tibetan people, also from Tibetans who didn't receive shoes at all and westerners. Apparently many people were touched and inspired by this shoe project.

On Saturday 16th April 2011, Norbu Entertainment organized a Tibetan music concert at TIPA Hall in McLeod Ganj. The concert hall was very crowded and everyone enjoyed the Tibetan performers. Before the concert started, Mr. Chime Youngdung, President of the National Democratic Party of Tibet, gave a welcoming speech. To their big surprize, Dennis and his wife Marijke were called on the stage. Mr. Youngdung spoke about the shoe project and offered the couple some gifts for their work for the Tibetan cause and the Tibetan refugees in Belgium and India during the last 4 years.

Dennis Barbion was also asked to share a few words with the public. He told that he found it his duty as a human being and as a Buddhist to be helpful for other people and to help the Tibetans who suffer so much and already for such a long time. Dennis also called upon the hundreds of Tibetans in the concert hall to stick together as one big Tibetan family and to help each other out too, and to continue their faith and support for His Holiness the Dalai Lama. Dennis ended his small speech by saying that he and his wife will continue their support for Tibet until Tibet is free. For the Belgian couple, this attention during the concert was not necessary at all, but as Mr. Youngdung told them, it's important to know and also most encouraging for the Tibetan people.

The Belgian couple started a modest shoe project in 2009 and they never expected this success and impact of this simple initiative.

As Dennis and Marijke also said to the people in Dharamsala, the most thanks goes to the sponsors of the project. Without sponsors there would be no project at all, and the couple would not be able to donate shoes. And in fact they only see themselves as a bridge between the sponsors and the Tibetan refugees. The Belgian couple wants to express their sincere thanks to all the people who contributed in this project.