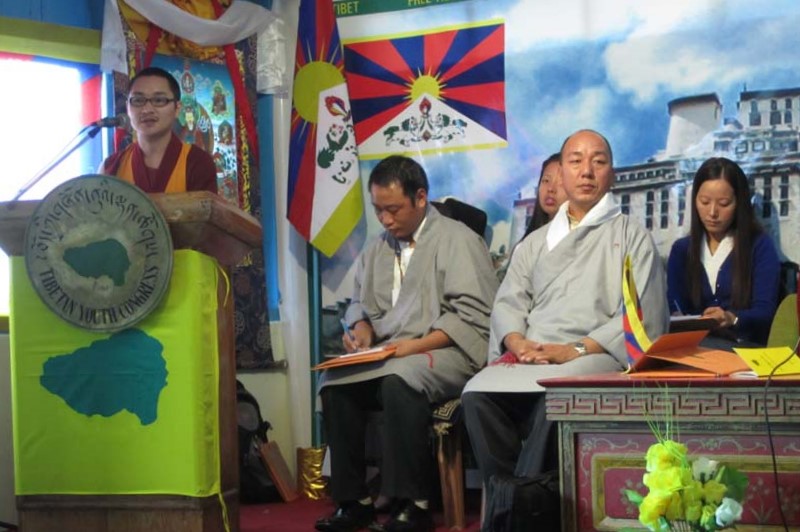 The Opening Ceremony started with the recital of Tibetan National Anthem and a one-minute observance of silence to mourn the Tibetan martyrs who sacrificed their lives for the sake of Tibet. This was followed by the recital of TYC song by the band of Central School for Tibetan, Darjeeling. TYC President, Mr Tsewang Rigzin highlighted the significance of holding this meeting in Darjeeling, because historically His Holiness the 13th Dalai Lama had spent a few years in the 1910 when he came into exile.

He brought attention to the recent acts of self-immolation by Phuntsok and Tsewang Norbu in Tibet who despite the fact that they were born post occupation and had never experienced a free Tibet, yet gave up their lives for their country at such a tender age. He therefore stressed that we must continue this fight on our own and not depend on big nations such as the US and Europe to bring about change. These countries and more are the supporters who will support the cause but ultimately it is the fight of the Tibetans. "Independent is not a question of whether we will get it or not but whether we are ready to take it or not" he added.

He further emphasized that in the 42 years since its inception, TYC has assumed major roles and taken firm stances wherever and whenever necessary. This year was significant because of the historic change in the exile Tibetan world when His Holiness the Dalai Lama announced his decision to devolve his political authority. During this time, TYC while supporting the decision made it clear that we will work harder for the cause and more than ever before will remain resolute in our commitment to serving our country. Therefore, in view of this pledge and in order to accomplish this commitment, the unity between the Centrex and regional chapters is highly important.

The speech by the President was followed by Shingza Rinpoche who said he will cherish this opportunity to be at this important meeting of TYC. He expressed delight at the fact that more than 30 chapters have congregated at this 42nd WCM. This exemplifies the strength of TYC, which China gravely fears. For China, TYC is the industry from where all the prominent members in the Tibetan community have been produced. This is the reason why TYC is a thorn in the eyes of China.

Tibetan people in Tibet place so much aspiration on TYC because it has retained the importance and legacy of Independent. People in Tibet often advice fleeing Tibetans, "When you go into exile, you must fight for independent, because if it is autonomy you will fight then you might as well come back. We in Tibet do all that we can inside here; your responsibility being outside is to keep the fight alive".

Being a monk, my association has to be with a religious institution, so I have no real affiliation to any political organization however, if I join any organization, it will be TYC. TYC should strengthen the might and vigor of Rangzen advocacy. TYC should keep one eye, one leg and one arm in Tibet at all times.

Finally, the Vice President Dhondup Lhadar while proposing the vote of thanks applauded the attending students of CST Darjeeling their Tibetan song performance and noted the importance of retaining the Tibetan language and identity. The Vice President reminded the gathering that HH the 13th Dalai Lama worked for the restoration of Tibetan Independence while in exile in Darjeeling and was able to return to Tibet by the end of 1912. Subsequently, upon his return he made the historic declaration of Independence of Tibet. Likewise in this gathering we must strategise to bring our leader HH the 14th Dalai Lama back to Tibet.

In the afternoon session, the Centrex presented it Annual Report and Accounts and received queries from its regional chapters. While the Centrex members examined Regional Chapter's reports and accounts.