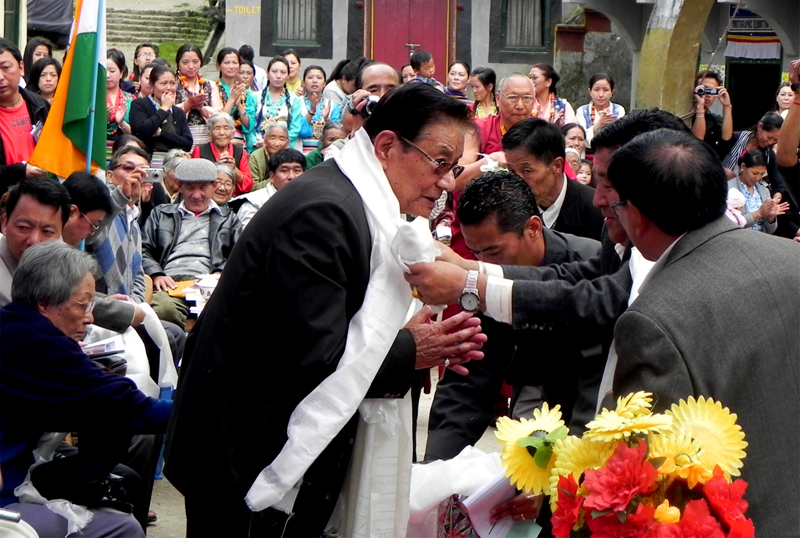 Dharjeeling: - The much awaited Thanks Giving Program in honor of Dr. T. Wangdi M.B.B.S (Cal) former Chief Medical Officer of the Tibetan Refugee Self Help Centre (TRSHC) was held on Sunday, the 16th October 2011 at the Centre in Darjeeling. The Program began at 10:15am with Doctor-la lighting a butter lamp in front of the portrait of His Holiness the Dalai Lama.

A video message for Dr. T. Wangdi from Trisur Gyalo Thondup (elder brother of His Holiness the Dalai Lama and husband of late President Mrs. Gyalo Thondup of the TRSHC) was screened congratulating and thanking him for his services to the people of Centre and the region as a whole. This was followed by an introductory speech by Mr. Tsultrim Dorjee Chunang, Program Organizer, outlining the purpose for the occasion and giving a brief synopsis of Doctor-la's life and work.

Dr. T. Wangdi-la was then presented a Thangka of Buddha Shakyamuni (especially blessed and signed by His Holiness the Dalai Lama) and a Citation by the Tibetan Settlement Officer, Mr. Tsewang Tashi as a mark of appreciation and gratitude on behalf of all ex-TRC members worldwide.

A brief bi-lingual inspirational biography of Dr. T. Wangdi entitled 'Our Beloved Doctor' was released on the occasion. Brief speeches devoted to the good doctor were presented by the Tibetan Settlement Officer, Mr. Tsewang Tashi, the Manager of the Centre Mr. Dorjee Tseten and the Principal of the CST Darjeeling Mr. Tashi Dhondup. Dr. Wangdi then presented a very emotional speech outlining his life's work and mentioning many incidents. Tears flowed freely from all the assembled people during his talk including from Doctor-la himself.

A short cultural interlude of songs and dances from the Centre's staff, workers, senior and junior boys and girls were presented which was thoroughly enjoyed by one and all. The short program came to an end with a Vote of Thanks by Mr. Phuntsok, program organizer. Many photo sessions with Doctor-la and his gracious wife Mrs. Dorjee Lhamo took place as a remembrance for posterity.

Gifts were presented to Dr. Wangdi by the monasteries, the CST Darjeeling and ex-TRC members. Scarves from all the Centre people, local Tibetan Associations etc. were presented to Doctor-la and his wife including Centre's first lady Doctor Mrs. L. Wangdi.

"It is a great pleasure to be here today; I feel highly honored to stand here and address all the TRCians, Ex and present. Thank you for remembering me and arranging this Thanks Giving Programme," said Dr. T. Wangdi.

"I am very happy to accept the award given to me. I dedicate this award to our ex-president Mrs. Thondup-la and the incumbent president, Sey Kusho Khedroop-la, without the  uidance and management of whom, the hospital would not have survived for so long,"  he added.

"Year 1959 saw an influx of lots of Tibetan Refugees to Darjeeling and along with them, came the problems of health.  A hospital especially for Tibetans was essential to meet the health challenges and in 1963, with the help from American Emergency Committee, this hospital was established," he said.

'My long term relationship with the Centre was very enriching, and over a period of time the Centre with many fond memories of an association that was both stimulating and inspiring. I worked for the Centre for almost 42 years of my life and this has given me immense satisfaction and happiness for being able to serve the Tibetan community and today,"  said Dr. Wangdi.

Others honoured in the event were Centre's first nurses such as Sister Kunchok Lhamo, Sister Philip, Sister Pema Dechen and Dr. (Mrs.) L. Wangdi. Mentions were also made of those Sisters not present such as Sister Margaret, Sister Namgyal, Sister Pemba and Sister Shobha. Mrs. Deoki Philip, Head Mistress of Centre's Nursery School was also honoured during the event. After the program all those assembled numbering more than three hundred people were provided a simple yet sumptuous lunch.

The organizers Sonam Dorjee, Phuntsok, Tsultrim Dorjee (Bhai) and Tsultrim Dorjee Chunang thanked all field coordinators Sonam Choezom, Kunchok Tashi and Rinchen Dorjee (USA), Phuntsok Tashi (Canada), Kunga Tashi (Holland), Passang Dolma, Lhakpa Bhuti (India) and all the ex-TRC members in India and abroad for their generous donations and cooperation for the event as well as the TRC staff and workers for what turned out to be a most successful program.