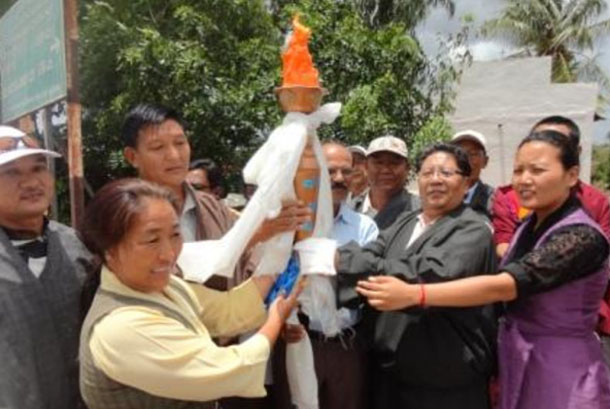 Kollegal: - The "Flame of Truth" torch relay for Tibet, which was launched from Kochi of Kerala made its journey to Tibetan settlements in Karnataka State including Hunsur Rabgyeling and reached the Kollegal Tibetan settlement on August 3, 2012.

According to a press report by organisers, the south India leg of Flame of Truth reaches Tibetan settlement, Kollegal on August 3 at 11.30 a.m. At the reception, President of Indo-Tibetan Friendship Society (ITFS) and local Indian members, Settlement Officer, representatives of Monasteries, Chairman of Local Tibetan Assembly, President of Tibetan Freedom Movement, Co-operative Secretary, Presidents of Regional Tibetan Youth Congress & Regional Tibetan Women's Association, Heads of local Tibetan Hospital & Mentseekhang, Principal of the school and camp leaders received the torch at the gate of camp no. T. A delegation from Hunsur Tibetan settlement led by Chithu Tsering Youdon handed over torch to the Settlement Officer and Vice Chairman of the Local Assembly.

With grand escort, the "Flame of Truth" torch was then brought to the Tibetan settlement office ground, where official reception was held. At the beginning, Tibetans students sang Tibetan & Indian national anthem. Then 2 minutes silence was observed to pay homage to Tibetan martyrs followed by recitation of Tibetan prayer of truth.

It was then followed by a speech by Mrs. Tsering Youdon, Member of Tibetan Parliament. Vice Chairman of Local Tibetan Assembly read press release issued by Tibetan parliament. President of Tibetan Freedom Movement gave vote of thanks speech.

Later "Flame of Truth" relay led by President of ITFS and Settlement Officer begun from settlement office to nearby Odayapala village. At a programme conducted at Odayapala, President and members of ITFS gave speech in support of Tibetan struggle in their local language. Over 150 people including Tibetans and Indians participated in the relay.

According to planned programme, the relay of the Flame of Truth will be conducted in all camps of settlement from August 4 - 6. On August 7, relay will be organised at district headquarter of Chamraj Nagar district and memorandum will be submitted to the local authority.

On August 8, special prayer all will be conducted at Lhagyal Ri and Flame of Truth will be escorted to its next destination Mysore city in South India.