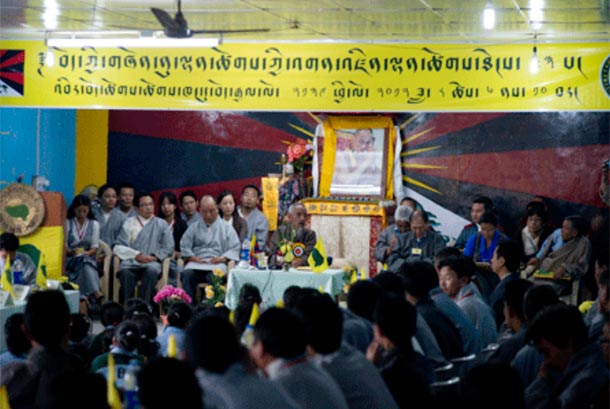 Dharamshala: - Tibetan Youth Congress (TYC) resolved Sunday, August 12, 2012 to launch a major hunger strike in New Delhi to stand in solidarity with Tibetan brethren in Tibet to amplify the voices of the unprecedented number of self-immolations in Tibet.

At the end of the 43rd Working Committee Meeting (WCM) which concluded today, TYC members will return to their respective Tibetan settlements with new resolve and rejuvenated spirit to continue with the struggle.

For the inaugural ceremony of the WCM, one of the strongest voices of the Rangzen movement, fondly celebrated as Rangzen father and a former President of TYC, Mr. Lhasang Tsering graced the ocassion as the Chief Guest.

The General Secretary, Ms. Tenzin Chokey welcomed the Chief Guest, honourable guests, students from TCV Suja and the delegates to the meeting. The ceremony opened with the observance of a-minute silence for all the brave Tibetan brothers and sisters who sacrificed their lives for the country. The gathering then sang the Tibetan National Anthem after which the TCV Suja school band presented a beautiful rendition of the TYC song.

Presiding over dignitaries incuding members of the Tibetan Parliament in Exile, heads of TCV School Suja, representatives from the major monasteries in the settlement and leaders of the Bir Tibetan settlement, Mr. Lhasang Tsering said: "Rangzen is not an option, but our destiny. No one is offering any option nor is Rangzen a choice." Speaking with characteristic passion and fervour he said: "Policies may change in time, but destiny of a nation is but naturally - Independence."

The President Mr. Tsewang Rigzin in his welcome address asserted the significance of being prepared for the 15th General Body Meeting next year wherein the new Central Executive Committee of the Tibetan Youth Congress will be elected. He reminded the gathering that Tibet and Tibetan people are currently undergoing one of the most difficult situations and that we should be all the more geared up to sacrifice time, money, skills and if need be even life for the cause.

The Vice President Mr. Dhondup Lhadar in his vote of thanks applauded the achievements and committment of the Chief Guest who has remained resolute and determined in his stand for Rangzen despite the challenges. He also remarked on the significance of the venue of the WCM because of the presence of Suja School wherein majority of the students are from Tibet and five Tibetan settlements in the area.

The meeting discussed a wide range of subjects from preservation of Tibetan culture and identity, building new strategies and creative tactics in the struggle. TYC also discussed ways to strengthen its body and increase membership, especially among the Tibetan youth. Security of His Holiness the Dalai Lama, Lhakar Movement and building alliance with other freedom struggles against China were issues that elicited ample discussions.

Deliberations on the ongoing critical situation inside Tibet was one of the dominant theme for discussions during the meeting. While the youth encouraged immediate action the elder members advised well-planned strategic action.

The 43rd Working Committee Meeting came up with 21 resolutions. Some of the important resolutions taken during this WCM include recognition of the brave acts of the self-immolators in Tibet as welll as India as the highest form of non-violent action.

It resolved to make firm appeals to the Indian Government and the Department of Security to scale up security measures and be more vigilant on devotees seeking audiences with His Holiness the Dalai Lama especially the ones from China. It also resolved to make appeals to the Kashag and the Assembly of the Tibetan People's Deputies to revise the goal of the Tibetan Government in Exile to Rangzen.

The meeting ended with concluding remarks by the President, Mr. Tsewang Rigzin who reasserted the opportunity we have all been bestowed to work jointly for our cause and the pride to sweat for the restoration of Tibetan Independence.

Report submmited by the Office of Tibetan Youth Congress.