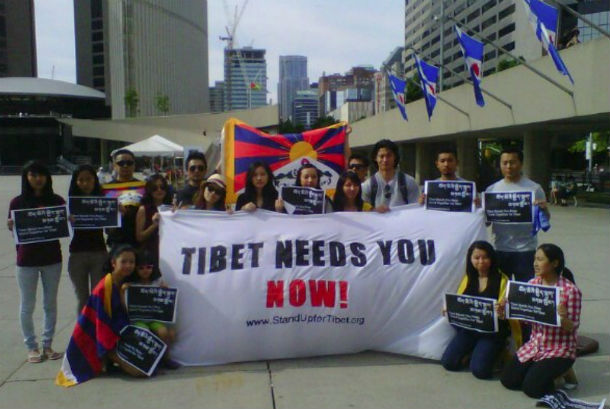 Toronto: - On August 22, Students for a Free Tibet activists and Tibet supporters will be participating in a 'Walk of Silence for Tibet,' marching from the Chinese Consulate in Toronto towards City Hall. This walk is being undertaken to urge the Canadian government to break its silence and support multilateral action for Tibet. There have been 49 self-immolation protests in Tibet since 2009.

"China continues to use violence to silence Tibetans. But Tibetans are rising in spite of all the repression they're facing," said Urgyen Badheytsang, National Director of Students for a Free Tibet Canada."As individuals, we have to do everything in our capacity to support the Tibetans in Tibet.

On a governmental level, a multilateral forum to address the Tibet issue would ultimately show that countries around the world intend to take action on Tibet. The continued self-immolations and sacrifices in Tibet move us to highlight the Tibetan cause, because if we don't do it here, where we are free to express ourselves, then who will?"

This walk is also part of a series of weekly actions and protests undertaken by Students for a Free Tibet (SFT) Canada and Tibetan Women's Association of Ontario, and will mark the 33rd week of protests and vigils since January of this year. 'Lhakar', or 'White Wednesday' is a non-cooperation movement that started in Tibet, and continues to spread around the world.

"There isn't any space for political organizing in Tibet. In a way the Tibetans are driven to make extreme sacrifices because of that," said Rinchen Dolma, member of Students for a Free Tibet Canada. "But what we are also seeing increasingly, is governments being silent on the Tibetan issue, especially the recent wave of self-immolations.

Our silence in free countries are no different from a silence imposed by authorities in China, so this action strongly calls on media and governments everywhere to take a strong stand on Tibet, and to call on China to heed the demands of the Tibetan people."

Students for a Free Tibet is an international grassroots network that works to advance the movement for Tibetans' fundamental right to political freedom.

The organization is at the forefront of Tibet's non-violent movement and is known for its creative, strategic and dynamic campaigns and its commitment to training young people and students in the art of leadership and non-violent action and strategy.