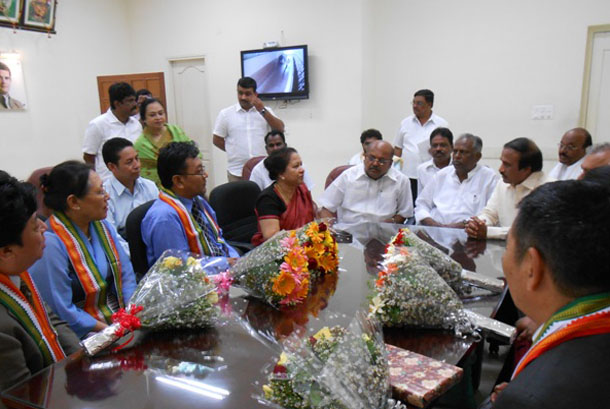 Bangalore: - Following series of Tibet-lobby meetings with the local political leaders, receptions at Party Headquarter, banquet interactions with eminent personalities and leaders and Talk at College, the 'Solidarity with Tibet' Campaign in the Bangalore city concluded with a huge Public Rally at the Freedom Park and a Candle Light March to the M G Road on the 5th evening.

In a series of address, Honorable minister Mrs Shobha Karandlage while lauding the Tibetan peoples' undying spirit encouraged the Tibetans to remain unperturbed despite the growing Chinese might. "Tibetans should also try to take the fight in the Indian Parliament and seek India's political support. I will certainly ask my colleagues to raise the issue of Tibet", assured Mrs. Shobha. Other Indian speakers including Mr. Dinesh too expressed their solidarity with the Tibetan issue and pledge that Indians will never forsake the cause of Tibetans.

Earlier on, the Tibetan MPs Ven. Atruk Tseten and Mr. Lobsang Yeshi delivered the opening remarks and Mrs Bumo Tsering read out the message of solidarity extended by numerous political leaders including Honorable Law Minister Mr. Suresh Kumar who couldn't make it for the Rally.

Later the delegates met with the Mr. Suresh Kumar, Honorable Minister of Urban Development, Law and Parliamentary Affairs at the Vidhan Soudha and apprised him of the Tibetan issue.

In the evening, Mr. Lobsang Yeshi, the Tibetan MP addressed the students of St Joseph College on the issue of Tibet and the ongoing Solidarity Campaign by the Tibetan Parliament. This was followed by a banquet interaction with numerous Indian political leaders including Mr. Ramachandra Gowda, former minister and MLC, Mr. Narender Babu, MLA, City Corporates Dr. Shivaprasad and G Manjunathan, ITFS executives Niranjan and Shivanand, Senior Journalist Hemanth Kumar and BKN Sathyanarayan.