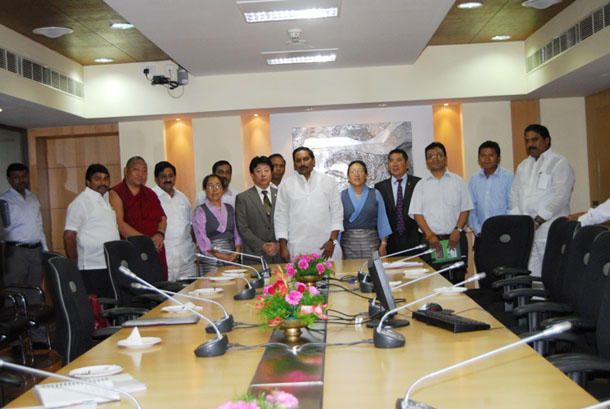 Hyderabad: - The Tibetan Parliament members who are on a month-long ‘Solidarity with Tibet’ lobby campaign in South India called upon the honorable Chief Minister of Andhra Pradesh, Sri Nallari Kiran Kumar Reddy in Hyderabad city.

Hyderabad: - The Tibetan Parliament members who are on a month-long ‘Solidarity with Tibet’ lobby campaign in South India called upon the honorable Chief Minister of Andhra Pradesh, Sri Nallari Kiran Kumar Reddy in Hyderabad city.

The Tibetan delegation was also honored with a warm reception at the Party Headquarters of State Congress Party, BJP and TDP Party. The delegates also met with Sri Purshottam Rupala, MP and Vice President, Central Executive, BJP this morning.

The Tibetan Parliament members began their campaign in the ‘Hi-Tec City’ by calling on the Chief Minister on the 7th morning. Despite ongoing political turmoil and the Party’s election related activities in the city, the CM met the Tibetan delegates and has also invited his ministers and MLA colleagues Sri Ranga Reddy, Sri Vijay Kumar and Sri Srinivas to join the meeting with the Tibetans. CM introduced Sri Ranga Reddy as a long-time Tibet supporter. Following the delegates’ briefing of the crisis in Tibet and the purpose of the campaign, Sri Reddy expressed his concern over the Tibet issue and assured the delegates that the memorandum would be forwarded to the Central Government for attention and actions.

Earlier, the delegation visited the State Congress Party Headquarter calling upon senior Party leaders and Secretaries Sri G. Niranjan, Sri Kumar and Sri T Narender Rao. The Party leaders assured the delegates of their firm support to the Tibetan cause.

This was followed by a visit to the BJP Party Headquarter where the State President and MLA Sri G Kishan Reddy, State Convenor Sri Ravi Mehra, Secretary K.V.S.N.Raju, and Party Youth leaders Dr. Laxman and Sri Swami Goel received the Tibetan Parliamentarians with bouquet and shawl offerings. During the exchanges Mr. Kishan Reddy re-affirmed BJP’s consistent commitment to the Tibetan cause and assured that the cause of Tibet is very close to their heart.

The delegation while calling on the leaders of the popular regional Telugu Desam Party expressed condolence for the recent misfortune of a demise of TDP’s prominent leader Yerram Naidu in a road accident. Mr. Yerram was an ardent supporter of Tibet. The Party’s prominent officials regret that the Tibetan delegation could not meet the current Party leader Sri Chandra Babu Naidu as he is on a Padyatra in the state.

However, the delegation said that they assured that Mr. Naidu would be most delighted if the Tibetan delegation could visit Warangal to meet him during the Padyatra. The Party officials including Central Politburo Sri Yanamala Rama Krishnudu and Sri Kaluva Srinivaralu, General Secretary Sri Peddi Reddy, MLA Sri Bojala Gopal Reddy and Mrs. Sobha Numavath, President of TDP Women’s Committee etc. held an hour-long interaction with the Tibetan delegations and later addressed the contingent of over 20 media reporters that throng the Party Headquarter. Before leaving, the Tibetan delegates offered flowers and paid tribute to the statue of the late Party leader N T Rama Rao at the party headquarter.