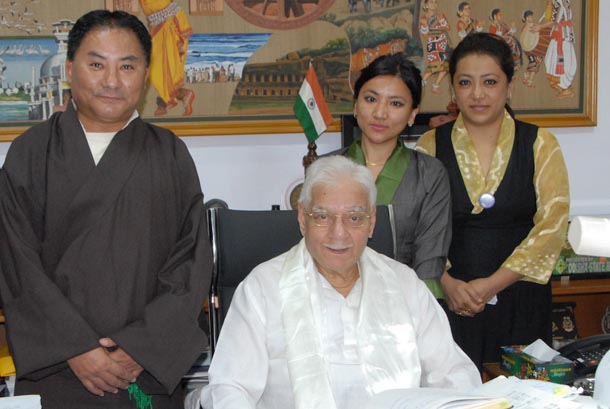 Bhubaneswar, January 15, 2013: The North-East Zone Tibetan Parliamentary delegation arrived in Bhubaneswar, the capital state of Odisha on January 13 for a 5-day lobby campaign.

The second leg of North-East zone lobby campaign kick-started with a ‘Mass Solidarity Rally for Tibet’ on the evening of January 13 at Bhubaneswar. Around 200 Tibetans from Phuntsokling Tibetan settlement, Gajapati district made a 7-hour bus journey to partake in the rally led by the members of Tibetan Parliament and were joined by over 35 Indian supporters.

Urging Indian leaders and masses for public expressions of ‘solidarity with the 96 self-immolations inside Tibet’ and ‘urgent action on ending the crisis in Tibet’, the marchers took a candle light vigil from Ram Mandir to Lower PMG ground. The rally hogged headlines in leading news dailies of the city.

Shri Murli Chandrakant Bhandare, the honorable Governor of the State, received the delegation at the Raj Bhavan on January 14. The exclusive meeting lasted for 30 minutes. While commending the ‘passing of baton to young leadership in the exile Government,’ the Governor expressed anguish over ‘the prolonged suffering the Tibetans inside Tibet are subjected to by the erroneous State policies.’ “ I truly wish for a solution to this long-standing issue and the Tibetan identity must be recognized and their true aspirations valued.” The Governor recognized the current ‘Middle way policy’ of the exile administration as ‘befitting and practical.’

The Odisha Cabinet Minister for Agriculture - Shri Debi Mishra and Minister for Industry and Excise – Shri Niranjan Pujari welcomed the delegation at their ministry offices and pledged the ‘support of State Government for the Tibetan struggle against oppression.’

Successive meetings held with political party leaders such as Shri Bhupinder Singh – MLA, Leader of Opposition and Spokesperson for Congress party,  Shri Niranjan Patnaik - President of Congress Pradesh Committee, Shri Jual Oram – former Union Minister for Tribal Affairs and present State president of Bharatya Janta party (BJP), Shri Ashok Sahu – former MLA and current Vice President and Spokesperson for BJP, proved effective in keeping the political leaders abreast of the true adversity of the Tibetan life inside Tibet and in significantly in appealing for urgent diplomatic intervention from the Indian side in the light of the deepening crisis inside Tibet.

Over the next two days, the Tibetan parliamentary delegation will meet with the chief whip of the ruling party –Biju Janata Dal Party (BJD), BJD members of the Rajya Sabha and members of the Legislative Assembly and press for an ‘All- Party Parliamentary resolution on Tibet.’ An appointment with the State Chief Minister Shri Naveen Patnaik has been sought.

In the light of the gross human rights violations inside Tibet, the situation in Tibet is exacerbated by a brutal crackdown by the Chinese government on any forms of peaceful expressions for freedom by the Tibetan people, thus deepening the anguish Tibetans feel. This year the Tibetan Parliament in exile launched a massive ‘All-India Lobby Campaign’ to highlight the critical situation inside Tibet and to seek timely support of the Indian leaders and people while alongside calling for immediate global intervention to end the crisis inside Tibet.

After West Bengal and Odisha, the North East zone Parliamentary delegation will visit Chhattisgarh and Jharkhand, in the first phase of the month-long all-India lobby campaign and Arunachal Pradesh, Meghalaya, Assam, Sikkim and Nagaland during the second phase of the lobby campaign.