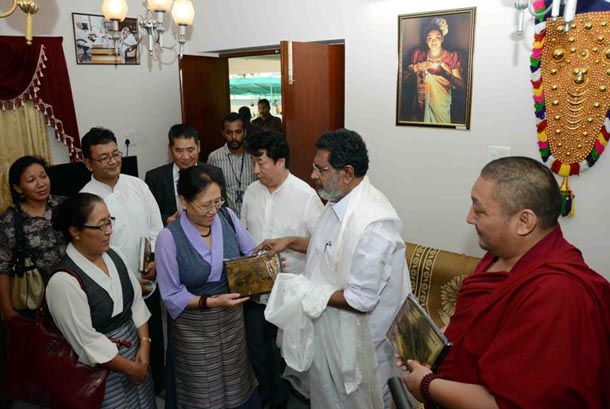 The delegation also addressed a prominent independent Think-Tank; Kerala International Center and the University of Kerala.

This morning the delegation called upon the Honorable Chief Minister of Kerala, Sri Oommen Chandy at the Secretariat and apprised him of the critical situation in Tibet. They urged him to raise his voice in support of resolving the urgency in Tibet at various political forums. Mr. Chandy assured the delegates that, ‘Despite political limitations, our full support, love and affections are with the Tibetans. You are fighting for a good cause’. The delegates also met Sri Ramesh Chennithala, President of Kerala Congress Party and a former union minister at the CM Office.

Earlier the delegates called upon the Speaker of the Kerala Legislative, Sri G. Karthikeyan. The Speaker accorded a warm reception to the delegates offering refreshments and mementos and discussed the issue of Tibet for nearly an hour. Assuring his utmost support for the Tibetans, Mr. Speaker emphasized that Tibetans can enjoy ‘Freedom in Exile’ in India for eternity. Later he told the press that the interactions with the Tibetans had proved fruitful in unraveling numerous doubts he had on the Tibetan struggle.

The delegates earlier started the campaign in the city by calling on the Spiritual Guru Sri Sri Ravi Shankar at the Massive Satsang attended by over 50,000 followers and scores of media. With an announcement of the arrival of Tibetan Parliament members from Dharamshala, the delegates were warmly received on the dias along with the Honorable CM Mr. Chandy and other dignitaries with shawls and bouquet. Sri Sri Ravi Shankar Ji later enquired the delegates about His Holiness the Dalai Lama’s Health and asked to convey His Warm Greetings to His Holiness.

This was followed by a presentation at the prominent Think-Tank; Kerala International Center (KIC). The Talk was chaired by Former Ambassador T.P. Srinivasan and attended by a score of eminent Strategist and Defense analyst including a former Foreign Secretary, several former Ambassadors and retired Military leaders and scholars. The KIC members affirmed the interaction as ‘most revealing and an eye-opener of a kind’.

Another highlight of the lobbying campaign in the city proved to be the historic meeting with Mr. V.S. Achuthanandan, the Kerala Opposition leader and the former Chief Minister. As one of the founders of Communist Party of India (Marxist) and having close affinity with the Beijing, Mr. Achuthananadan met with the delegation and declared that he would certainly ask the Beijing to facilitate a dialogue with the Tibetan leadership.  This was followed by a meeting with another Communist leader Sri M.P. Achuthan of Kerala CPI Party who is also a member of Rajya Sabha.

Later a Press conference was convened at the Trivandrum Press Club attended by over 30 members from media fraternity.