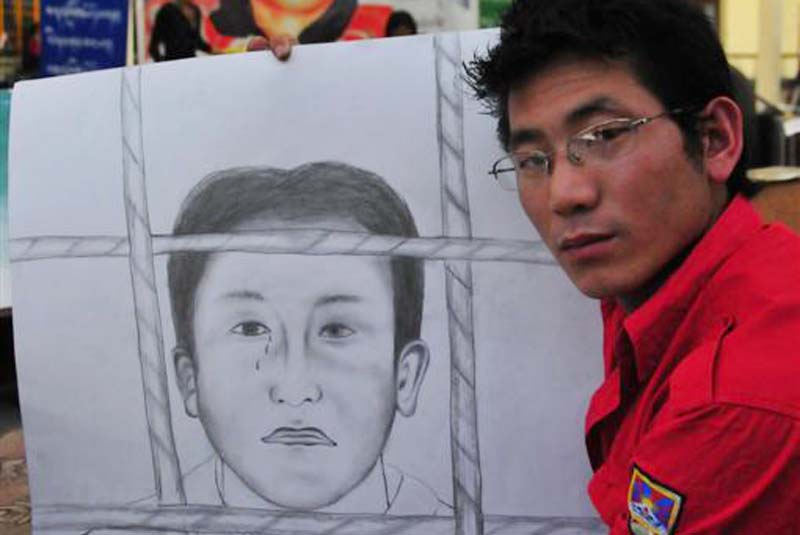 Berkeley, Ca, April 25 - San Francisco Bay Area Tibetans and supporters joined forces to celebrate the 21st birthday of Tibet's second highest religious figure Gendhun Choekyi Nyima, honored by most as, His Holiness the 11th Panchen Lama - who has been missing for 15 years.

"The 11th Lama was abducted along with his family by Chinese security personals in 1995 just days after the Dalai Lama recognized him as the 11th Panchen Lama." said Tenzin Gyurmey, Vice President of the Tibetan Youth Congress. "He was just six at the time making him the youngest political prisoner in the world."

The event was honored by Khen Rinpoche Geshe Kachen Lobzang Tsetan, head Abbot of the Tashi Lumpo monastery in India, and appointed to the monastery by His Holiness the 14th Dalai Lama.

"Chinese Communist authorities secretly abducted him along with his parents in May 1995, shortly after His Holiness the Dalai Lama declared him to be the reincarnation of the Panchen Lama." said Khen Rinpoche. "Today only one photo taken when he was six years old remains the only clue available of him to the outside world."

Traditionally, the Panchen Lama carries the responsibility of recognizing the next Dalai Lama and emphasized to the Dalai Lama institution.

20-year-old Gyaltsen Norbu, son of political party members of China, and currently national committee member of the top political advisory body was selected by the CCP as the "real" Panchen Lama, however Tibetans do not acknowledge this due to the fact that traditionally H.H the Dalai Lama and the Panchen Lama both acknowledge each others successor.

"The Bay Area Tibetans have always honored the Panchen Lama's birthday as a day of awareness" said Tenzin Namgyal Tethong, Former Representative of His Holiness the Dalai Lama.

Speaker Ruth Hayward, President and Executive Director of The Panchen Lama - Tashi Lhunpo Project informed the public of the recent development that has been taking place with the Tashi Lunpo Project and requested the public for support.

"Tashi Lhunpo project seeks to help fulfill the wishes of His Holiness the 14th Dalai Lama to improve the monastery of Tashi Lhunpo in exile, in honour of the Panchen Lama" said Hayward.

More than 300 petitions were collected and sent to Ban Ki Boon, Secretary General of the United Nations, requesting him to support the Tibetan people's demands of requiring the Chinese government to give verifiable proof of the well-being of the 11th Panchen Lama, Gedhun Choekyi Nyima and his family, who vanished were taken into custody back in 1995.

"It has been 15 years too long, and we cannot allow the Chinese Government to dictate our traditions and our beliefs by picking their own Panchen Lama" said Tsering Dorjee President of SFRTYC. "We must take the initiative to raise awareness of our beloved Gendhun Chokyi Nyima, the 11th Panchen Lama of Tibet recognized by His Holiness the Dalai Lama and the Tibetan people."