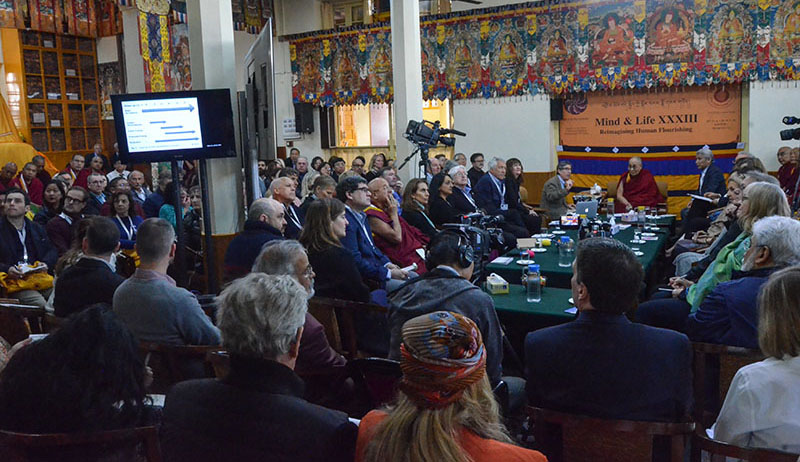 Dharamshala — His Holiness the Dalai Lama hosted more than 300 participants who flocked to the Main Temple in Mcleod Ganj for the opening of the Mind and Life Conference on March 12.

This year's conference is focused on the topic, ‘Reimagining Human Flourishing’. Presenters and moderators of the conference sat around a large low table in the main part of the temple. They were surrounded by guests and interested observers—100 from the Mind & Life side and another 200, many of them scholarly monks and nuns, invited by the Dalai Lama Trust.

Susan Bauer-Wu, President of the Mind & Life Institute, began by welcoming everyone present to this Mind & Life Dialogue, the 33rd altogether and the 13th in Dharamsala. She expressed gratitude to His Holiness, the Dalai Lama Trust and the Hershey Family Foundation for their support in making it possible. In the 26th year of its existence she reiterated the Mind & Life Institute’s aim of working to eliminate suffering and promote human flourishing. On this occasion the intention is to delve again into how to give young people a good education that takes account of secular ethics, attention and compassion, love and forgiveness—an education of the heart, bearing in mind the evidence that compassion can be taught.

This morning’s moderator Kimberley Schonert-Reichl introduced the first speaker, Richard Davidson. He started by thanking His Holiness for his time and inspiration and went on to present a brief historical context for the current meeting. He cited five previous meetings as having a pivotal bearing on this one. The first was the 5th Mind & Life dialogue held in 1995 in Dharamsala, at which altruism, ethics and compassion were discussed. Next was the 8th Dialogue, also in Dharamsala, that dealt with destructive emotions and led to Dan Goleman’s writing a book that catalysed public focus on them. At this pivotal point, Davidson reported, His Holiness advised the members of the Mind & Life Institute to investigate practical ways to cultivate a virtuous mind and counter destructive emotions.

In the context of thoughts associated with changes in the brain, His Holiness asked if someone is physically at ease, which comes first the thought or the change in the brain. Davidson replied that many scientists say thought and brain activity co-occur, remarking that this relates to the relation between mind and brain about which he considers little scientific progress has been made for 100 years. This prompted His Holiness to reflect on the purpose of his meetings with scientists.

“One purpose is to extend our knowledge. Several decades of experience have shown that ancient Indian understanding of the workings of the mind derives from practices to cultivate single-pointedness and analysis—shamatha and vipashyana. It involves knowledge of how to transform emotions that remains relevant today. On the other hand, science presents a challenge to traditional Indian cosmology, which has resulted in my publicly rejecting belief in Mt Meru as the centre of the universe.

“However, since science is only beginning to investigate the mind, I believe ancient Indian knowledge has a contribution to make and that it is important to bring these traditions together. In 1979, when I held discussions with scientists in Moscow, they were happy to acknowledge five sensory consciousnesses, but dismissed mental consciousness as only of religious concern.

“The second purpose of these meetings relates to the crisis of emotions we witness in the world today, which is manifest in the contrast between the peace we enjoy together here and the anguish experienced in other parts of the world where people are being killed or dying of starvation. We need to show more concern for others’ well-being. We need a greater sense of the oneness of all human beings, the sense that we all belong to one community. We need to promote warm-heartedness. Religion can contribute to this, but sometimes religion leads to greater divisions. In such a context, scientists’ finding evidence that basic human nature is compassionate is a source of hope.

“That basic human nature can give rise to self-confidence, trust and transparency. It allows us to smile. Viewing others with suspicion is not a way to be happy. The one billion of seven billion people alive today who have no interest in religion are still human beings. We and they need a secular approach to creating a more peaceful, joyful world. Science shows us, for example, that warm-heartedness is good for our physical health.

“The time has come to think in terms of the whole of humanity not just our nation within its own boundaries. The environment too is telling us that we human beings have to work together as one community, which is the only way we’ll meet such serious issues as the increasing shortage of water. It will require a new approach to education that takes account of scientific findings and that cultivates human qualities on the basis of a secular scientific approach.

“This world with its human population may last another few thousand years, but we have to encourage the next generation to do things differently. I’m nearly 83, so I don’t have that much time left and when I’m gone I may go to heaven, if there is one. But I may be reborn on this planet since I pray to abide to dispel the misery of the world for as long as space endures and as long as living beings remain.

“It is our generation’s responsibility to act. We’ve seen too much war. We’ve seen too much money spent on weapons. To respond to problems by resort to the use of force is out of date. It’s the wrong method and yet we see it being repeated now at the beginning of the 21st century. We have to change, but our education system is too materialistic. However, we can improve that and the work we do now can influence the centuries to come.”

Richard Davidson concluded his presentation noting an increase in depression and suicide among children and young people. He remarked that leading scientists are beginning to acknowledge the potential contribution ancient Indian understanding of the workings of the mind can make.

His Holiness remarked that the mind can change and that children are susceptible to being taught to analyse. He noted the ancient Indian approach that reading or listening to an explanation is not enough. You have to think about it to really understand it. And having understood something you have make yourself really familiar with it in order to embody that understanding.

The opening session came to a close, but returned the next day to continue its second of four days.

The day's moderator, Tony Phillips, welcomed His Holiness and thanked him for his time. He explained that this morning three presentations would show how education of the heart is transforming education in actual practice, on the basis of His Holiness’s advice.

“I really admire how you are implementing these changes,” His Holiness responded to the presentations, “and observing the changes in children that come with them. I think our entire 7 billion human beings need to develop a greater sense of US. And I wish that international bodies like UNESCO would take up these approaches. As well as in the US and Europe, we need to see them applied in the Middle East, Africa and other places. We need to share this experience with countries facing serious problems.

“Shantideva puts it succinctly—‘if you don’t care about others’ well-being, forget about Buddhahood; even in this life you’ll have no joy’. In our day to day life warm-heartedness is the key factor for happiness.”

“The conflict between Israel and the Palestinians affects the whole Middle East,” His Holiness added. “Most Israelis are well educated. On one visit to Israel, I was the guest of a Jewish group so to begin with I heard everything from their point of view, but when I met Palestinians a few days later, I heard their side and there is a huge gap between them. Later, I also met a group of both Israelis and Palestinians who were working towards reconciliation, which is crucial if there is to be peace in the region. No matter how powerful Israel may be, these people have to live side by side, they have to live together, so it would be better to live in harmony.

“When I went to Jerusalem, I noticed that the Israeli areas were lush and green, while the Palestinian lands were dry. It seems the Israelis are very efficient in their use of water. How much better things would be if their expertise was shared.

“Maybe Mind & Life can do something there. If so it could be of benefit to the whole Middle East.”

“I often observe that the current education system is too materialistic and focussed on the pleasure derived from sensory consciousness, whereas compassion involves mental consciousness. This is why we need to introduce a better understanding of how the mind works.”

The session came to a close. The conference is being held from March 12-16.